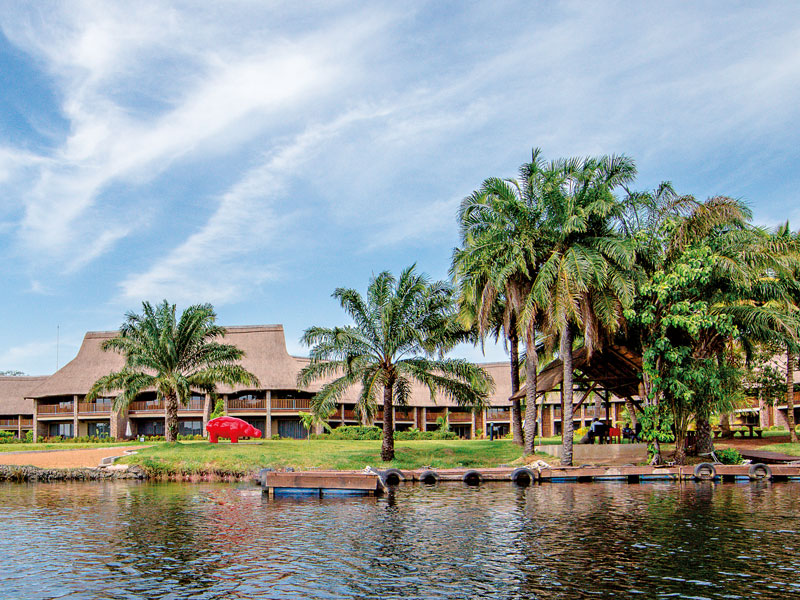 The Royal Senchi, developed on 35 acres of lush greenery along the bank of the Volta River, is one of West Africa’s most romantic hotel destinations.

For decades, Ghana has been a popular African tourist destination, mainly due to its strategic location, stable political environment and numerous tourist attractions. Widely known as a gateway to West Africa, the country is noted for its solid democracy, the hospitality of its people and its tropical climate.

While visiting Ghana, tourists can take part in a wide range of activities. They can acquaint themselves with some of the country’s historic sites, beautiful sandy beaches and national parks. Ghana is also home to lush hinterlands and rugged mountains that allow avid hikers to test their mettle. After a day spent exploring the country’s diverse landscape, tourists can enjoy local dishes such as ‘red red’, a hearty dish of black-eyed peas stewed with palm oil and plantain.

Adventure seekers
Ghana hosts a number of exciting tourist events that each make a trip to the country unique. The annual Paragliding Festival is an integral part of the three-day-long Kwahu Easter festivities. The celebrations include hiking, carnivals and street jams that feature some of the biggest celebrities in Ghana.

Festivalgoers with hopes of becoming airborne can take the opportunity to glide off the top of the Odweanoma Mountain to enjoy a spectacular aerial view of the forest below and the towns that perch on the rocky Kwahu Mountains. Adventurers wishing to keep their feet on the ground can undertake an 89km endurance hiking expedition. The festival’s 13th year of celebrations is scheduled to take place from March 30 to April 2, 2018, and will attract more flying enthusiasts than ever.

A visit to Ghana would be incomplete without a hiking trip to some of the amazing waterfalls the country boasts. Wli Waterfalls, located 20km from Hohoe, is the second-highest waterfall in West Africa. In the east of the country, about 17km from Koforidua, sits the Boti Falls, a twin waterfall referred to as male and female by the locals. From here, one could also hike to the aptly named Umbrella Rock.

Nature nurture
Ghana has a great deal of respect for its natural environment, and so the country has made sure to protect its wildlife. A total of 16 protected areas, made up of seven national parks, six resource reserves, two wildlife sanctuaries and one strict nature reserve, as well as five coastal wetlands, ensure that Ghana’s beautiful landscape is safeguarded.

Cape Coast’s Kakum National Park is located in a coastal rainforest. Visitors to the park have the chance to walk over the treetops on the canopy walkway. The 30m-high vantage point provides walkers with a panoramic view of the greenery and animal species that can be found in Cape Coast. Mole National Park, located in the northern region of the country, is Ghana’s largest park.

Its savannah landscape makes game and bird watching particularly easy, compared with dense rainforest habitats. The park is a refuge for African elephants, baboons, buffalos, lions, antelopes, leopards and several bird species. A tour of the century-old Aburi Botanical Garden reveals a rich collection of tropical flora that is a sanctuary for countless bird and butterfly species. The garden is a tranquil environment in which visitors can connect with nature.

Visitors to Ghana should be sure to make the trip to any of the country’s 30 heritage castles and forts. Some of these historic sites were conduits for the transatlantic slave trade, which saw the shipment of tens of thousands of slaves to the New World, mainly the Americas and Europe.

Prominent among these castles is Osu Castle, also known as Fort Christiansborg, in Accra. The castle was built in the 1660s and was the seat of government for most of its history, until the government was moved to Flagstaff House in 2006. Elmina Castle and Cape Coast Castle have both been recognised by UNESCO as World Heritage Sites. It was Cape Coast Castle that, in 2009, President Barack Obama visited on his first presidential trip to Africa.

Hinterland hospitality
Ghana’s coastline stretches about 540km from Aflao in the Volta Region, through Accra and Cape Coast all the way to Cape Three Points and New Town in the western region. Most of these beaches are dotted with top-quality hotels and resorts, such as the Royal Senchi Hotel and Resort in the Akosombo area, La Palm Royal Beach Hotel in Accra and Busua Beach Resort in the country’s western region.

Ghana’s hotels offer the finest facilities; well-kept, lush gardens, swimming pools and spas, and luxurious rooms and suites, which provide a relaxing atmosphere for a break from the stress of daily life. Visitors looking to keep active during their holiday can take advantage of the fact that most of these hotels and resorts offer the chance to participate in activities such as volleyball, football,
horse riding and frisbee.

For visitors to the Ghanaian hinterlands, a stay at the plush four-star Royal Senchi Hotel and Resort near Akosombo is a must. The hotel, developed on 35 acres of lush greenery along the bank of the Volta River, is one of West Africa’s most romantic hotel destinations.

The Royal Senchi’s green surroundings have inspired the hotel to become involved in local conservation projects. The Akwamu Hills Community Forest Project looks to protect the Akwamu Hills, which is home to the white-necked rockfowl and endangered talbotiella gentii tree. The Senchi Nature Park boasts a blend of fauna, flora and traditional and modern architecture, making it an ideal venue for relaxation, as well as business meetings and conferences.

“Our hotel has more than 80 rooms and suites, designed to allow our guests to take advantage of the refreshing environment and the commanding view that surrounds it,” said Emmanuel Mensah, marketing manager of the hotel. “Each luxury dwelling boasts a distinctive tribal-meets-elegance décor that will make one’s stay a treat for the senses.”

The multiple-award-winning hotel was named Ghana’s leading hotel by the World Travel Awards in 2015. In the same year, it was recognised as the best hospitality institution in the Eastern Regional Tourism Awards, followed by the best four-star hotel in 2016.

The Royal Senchi’s range of restaurants, bars and lounges cater to all of its guests’ dining needs. Additionally, the hotel’s swimming pools, fitness centre, spa and salon, driving range, playground and tennis courts provide entertainment that guests can make use of between exploring Ghana and enjoying some time to relax.