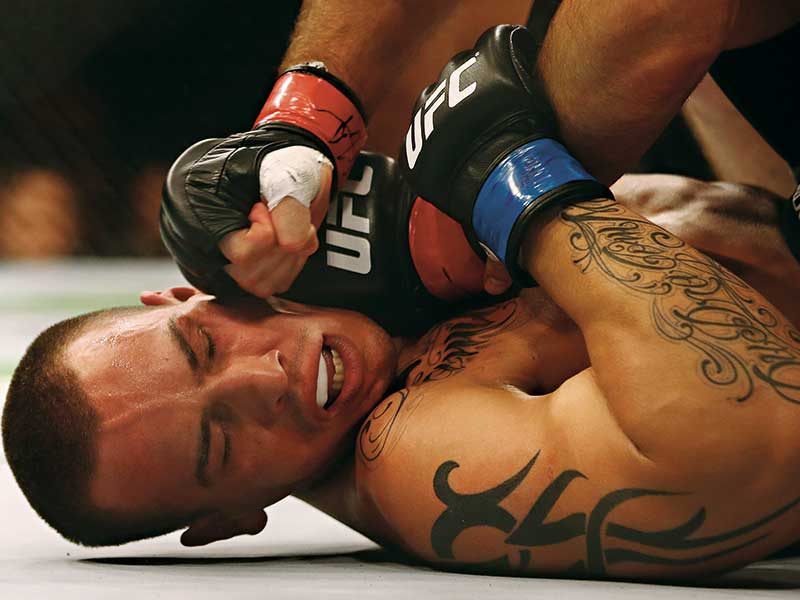 At its beginnings, the Ultimate Fighting Championship (UFC) – and Mixed Martial Arts (MMA) generally, for that matter – was the pariah of the sporting world. With no rules, no time limits, no judges, no weight classes and no gloves, the sheer brutality of the sport was enough to keep ‘cage fighting’, as it is so often called, deep underground.

The fact that UFC now outperforms boxing in terms of consistent pay-per-view purchases, is rated among the most valuable sports brands in the world, and is giving lessons to even the most established franchises is nothing short of astonishing.

On August 26, an unprecedented fight between undefeated world boxing champion Floyd Mayweather Jr and UFC’s biggest star, Conor McGregor, is set to take place, further emphasising MMA’s meteoric rise. As the most talked-about sport on social media – and with women’s bouts just as popular as men’s – MMA has become the ultimate underdog king, continually pushing the envelope of competitive sport.

Ali vs Lee?
Who would win in a fight between a boxer and a Taekwondo black belt? In an attempt to settle such age-old locker room debates, eight fighters of different styles were pitted against one another in UFC’s very first tournament in Denver, Colorado in 1993. The first champion, incidentally, was UFC co-founder Royce Gracie, who won the inaugural fight with his grandfather’s brand of Brazilian Jiu-Jitsu. Despite the graphic nature of the sport, UFC soon attracted a following, gradually increasing the number of contests as more and more fighters were added to the roster.

MMA is a sport with few socioeconomic barriers and has an appeal that transcends social, geographic and
gender boundaries

Just two years into the sport’s creeping rise, US Senator John McCain labelled MMA as “human cockfighting”, prompting UFC to be banned in 36 US states. Although this drove the sport further underground, UFC’s popularity continued to rise, and the move also sparked a series of changes that would see UFC become the sporting behemoth it is today.

This evolution started in 2001, when former boxer Dana White, along with Vegas casino heavyweights Frank and Lorenzo Fertitta, bought UFC for a cool $4m under the name Zuffa. The trio began cleaning up the sport immediately.

“In the most important step right after they acquired it, they ran towards regulation. At the time, we were only able to hold events in one state: New Jersey,” said Joe Carr, UFC’s Senior VP of International and Content. “So they put the unified rules of MMA in place, formalised the rounds and scoring systems; state by state they regulated the sport… it went from a spectacle to a sport.” Today, UFC is regulated in all 50 US states and in most countries around the world.

With the help of Jeff Novitzky, one of world’s most renowned anti-doping experts, UFC also enforced one of the cleanest programmes in the sporting world. Now, all fighters are subject to drug testing, which can be administered on any day of the year. Such changes drastically improved the image of MMA, making it more palatable to mainstream audiences.

This can also be said for the competition itself. With UFC, White and the Fertittas essentially had a blank slate; they took much from boxing, but also learnt from its mistakes as well. Instead of 17 weight classes, UFC only has eight, making it simpler and easier to engage with. Further, while boxing publicists tend to focus their efforts on the headline fight, making it the sole crowd draw, MMA arenas are packed from the first bout of the night until the very last.

A modern heavyweight
Out of necessity, UFC has always been at the cutting edge of digital interaction. “When the UFC was forced underground in 1995, they aligned themselves with the internet, which was growing around that period, and so it became very much an internet sport. Because the sport was so followed online, it grew exponentially as the internet grew,” said Gareth A Davies, journalist and broadcaster with The Telegraph and BT Sport. “It was the perfect storm for them in many ways.”

“We’ve always been a pioneer in social media,” Carr added. “Dana was one of the first big celebrities on Twitter and has a massive personal following, and that’s a function of when the sport started.

“Mainstream media wouldn’t cover us – social media was almost the only way for us to directly communicate with our fans, so we embraced it early on and we’ve been a leader in that space for a number of years now.”

In a bid to cultivate big-name personalities, UFC strongly encourages its fighters to be active on social media. This culture of digital interaction has helped UFC’s stars become household names: today, Ronda Rousey boasts 9.7 million followers on Instagram and more than 11 million fans on Facebook. Meanwhile, Conor McGregor has 14.9 million and 5.8 million respectively.

The popularity of MMA’s biggest names has been boosted by their appearances in popular films and television shows. The UFC-produced reality show Ultimate Fighter has also secured a legion of new fans; now, there are a countless number of fighters across the globe aspiring to compete.

“I think the more exposure the sport gets, the more of a following it’ll get,” said Dan Vinni, a professional MMA fighter. “Everyone knows the analogy that if people are playing baseball in one corner, football in another and tennis in the third corner, but a fight breaks out in the fourth, everybody is going to watch the fight.”

The public’s natural draw to combat sports helped UFC take the next step in its astronomic rise; after years of exponential ratings on Spike TV, UFC signed a seven-year deal worth $700m with television giant FOX in 2011. “It made a huge impact on the projection of the UFC,” Davies told Business Destinations. “It endorsed them to the American sporting public and those who weren’t interested – it made MMA sit with basketball, baseball, American football and hockey as one of the big five sports”.

In December 2014, UFC made another landmark move when it signed an exclusive sponsorship deal with Reebok. “I think it really cleaned up the aesthetic of the sport, it gave it a more uniform look and put it on par with other professional leagues,” Carr explained.

“If you look around at the rest of the sporting world, everyone has their deals with the Under Armours and Nikes of the world – it was about time that, as a global organisation, we had a similar structure.” Further cementing this status was the sale of UFC to the WME-IMG Group for a whopping $4bn in 2016.

World champion
What is perhaps most remarkable about the rise of MMA is its extraordinary global appeal. Carr attributes this to the very nature of the sport: “It’s just so easily understandable, [especially] when you compare it to baseball or cricket overseas… it takes [time] to understand the nuances of those sports, whereas it is innate for someone to understand two people getting into an Octagon and fighting. So it’s easily translatable across language and culture.

“I think the other thing that makes us so appealing globally is that all you really need is two people and some ground and you can train. This makes the sport accessible to everyone regardless of financial capacity. It’s one of the main reasons we now have UFC fighters on the roster from over 40 different countries.”

Given such low entry barriers, fight gyms and amateur clubs are emerging at a swift rate, from Manila to Moscow. “There wasn’t really an amateur option when I started, now there are world championships and an abundance of opportunities for amateurs,” said Vinni.

Yet another sign of the sport’s modernity and diverse appeal is the gender balance within MMA, something scarcely seen in the male-dominated sporting world. This can be explained, to some degree, by the mutual respect found within martial arts, as well as the incredible skill and personality shown by the current mould of female fighters.

“We were surprised that people enjoyed the women’s fights as much as they did the men’s fights,” said Davies. “In my view, it’s a slightly different sport: women tend to be more technical and more adept at pulling more moves – it’s not about knockouts. With the men, it’s more about power and speed, but the sport lends itself to great women’s fights as well.

“The rise of women’s mixed martial arts tallied so well with the great run that Ronda Rousey had for three years – she was badass, she was beautiful, sassy and intelligent, and she had a back story. “Very often the women coming into [MMA] have been through a lot of adversity, and they have extraordinary back stories.”

Invicta Fighting Championships, the world’s biggest all-women’s MMA organisation, is also growing in popularity, illustrating not only the rise of women in the sport, but also the emergence of rivals to UFC. The disruption of UFC’s monopoly is best seen in the Bellator Fighting Championships. Since multimedia conglomerate Viacom purchased a majority stake for $50m in 2011, Bellator has garnered its own impressive roster of fighters, and has established a worldwide following.

The rise of Bellator, among others, is ultimately essential for MMA. “Competition is great for the sport and especially the fighters. Having fought on Bellator, I can tell you that the show has a good idea of what they need to do and they have good financial backing, so I really hope not only for their sake, but the sport’s sake too, they make it a success,” said Vinni.

The astronomical rise of UFC is a remarkable story. Not only has it elevated MMA to become a well-respected, world-renowned sport, but UFC has also ensured it remains the most innovative. Its use of social media, as well as the popularity of women’s fights and the level of engagement between athletes and the fans, makes MMA a truly modern sport, and one that others could learn from.

That said, MMA is not just UFC, and this is an important distinction to make. In order for MMA to survive as a sport, UFC needs competition. The fact it is a sport with few socioeconomic barriers and an appeal that transcends social, geographic and gender boundaries means it is too important to place into the hands of just one franchise, no matter how pivotal that franchise has been in its rise. As MMA attests: a fighter can be great, but is nothing without rivals.