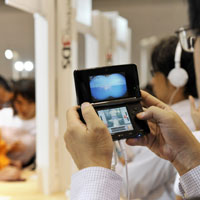 www.samsonite.com, £235
This new range of luggage from Samsonite coincides with the brand’s centenary and represents the very best in innovative and sleek design to cater for the demands of modern business. The Rolling Tote is conveniently cabin sized, (so no need to worry about accessing those precious documents on long flights) and comes fitted with an array of compartments for laptops, mobile phones and PDAs. A combination padlock ensures that all your valuables are in safe hands while a detachable shoulder strap adds to the portability of this neat package. As you’d expect from Samsonite, the materials used are of the finest quality, making this wonder bag a sound investment for years of business trips. Large shock-absorbing wheels are mounted near the outside edge of the case to allow for increased stability and effortless manoeuvrability.

Nintendo 3DS
www.nintendo.com, Y25,000
Launched in 2004, the original DS has done a pretty good job of luring bored commuters into the games market and this latest version promises a raft of new features in addition to the obvious 3D twist. The 3DS is the first dedicated gaming system to offer three dimensional  graphics independent of other 3D technology, utilising a process called autostereoscopy to produce the desired effect without glasses. Interestingly, one of the console’s two cameras is capable of capturing 3D images and film and Nintendo is rumoured to have entered into deals with producers such as Disney and Warner Bros for the release of 3D films. Gaming wise, more than 60 titles have been confirmed including old classics such as Mario Kart and Zelda.  Wii connectivity and WiFi also come as standard.

Caddy Aid GPS
www.caddyaid.com, £345
Recognised by many golfers, journalists and professional caddies to b e the best golf GPS distance finder in the world, CaddyAid is the only product which provides detailed photographs of each hole being played. The GPS range finder provides an unparalleled level of visual distance information via a colour computerised touch screen, which is particularly useful on blind shots. An automated readout shows the front and carry distances to any key point on the hole, even allowing you calculate any distance on the photograph from where you are standing. Great for seamless golfing outings without those tedious waits in between shots, the Caddy Aid is supported by 12 month subscriptions to your favourite courses via wireless software updates.

LP 2 Flash
www.ionaudio.com, £130
Reclaim the records gathering dust in the attic by converting them simply and efficiently into MP3s to play on your PC or on the move. Technophobes will be pleased to note that this process requires no connection to a computer as your precious collection will be transferred seamlessly on to one of the handy SD card or USB ports located at the front. Tracks will automatically be separated, so there’s no need to worry about the more frustrating aspects of digital archiving and it’s all nicely wrapped up with the inclusion of optional vinyl conversion software. The turntable itself is fully functional and can be hooked up to your existing sound system via the included cable to play your favourite 35s and 45s. You’ll even be able to archive other media such as tapes and minidiscs.

BeoSound 8
www.bang-olufsen.com, £895
Tired of listening to tinny music rattling from your media players? The Beosound 8 offers the breathtaking sound performance and innovative design that we’ve come to expect from Bang & Olufsen over the years. Highly flexible in application, this speaker system is one of the first that will play all of your Apple incarnations; including the iPad, which really makes it stand out from the crowd. A wall bracket adds to the versatility of this gizmo, meaning it has the potential to be placed in less conventional areas of the house, such as the kitchen or conservatory. This feature is supported by a manual room adaption switch which allows it to be placed anywhere without compromising sound performance. Another impressive function is the ability to network the speakers using the Apple Airport Express, conveniently allowing your music collection to be streamed from a PC or Mac.

SmartSwipe
www.smartswipe.ca, £69.99
Developed by NetSecure Technologies, Smartswipe is the world’s first truly secure personal credit card reader and allows you to swipe your cards via your PC just as you would in store. Plug the device into any USB port and begin shopping online as fast as you can swipe. Because conventional card security measures only protect data in transit from your computer to the shopping site, information stored on your hard drive is potentially vulnerable. Smartswipe secures this data before it enters your device and thus eliminates another point of entry for hackers and other malcontents. Convenience is key here, and you won’t be disappointed with the plug and play functionality. More importantly this handy little device delivers on its promise of saving you the time and keeping your details secure.

Rolex Submariner Date
www.rolex.com, £4,910
First produced in 1954 and synonymous with Bond film appearances over the years, the new Submariner Date is Rolex’s eagerly awaited reinvention of a timeless classic. Perfect for sea expeditions or those impromptu dives into hotel fountains, this sturdy time piece is built to resist water up to 300m with a 904L steel case. The new rendering features a slick ceramic ‘Cerachrom’ made from tough, corrosion resistant material. ‘If it aint broke don’t fix it’ goes the saying, and this is probably why Rolex has chosen to keep time with COSC-certified, self winding chronometer. The guidelock clasp has however been redesigned to allow for fine adjustment incrementally up to 21mm, meaning that it should fit snugly on to most suits, be they for diving or the more well-tailored kinds.

Gibson Dusk Tiger
www.gibson.com, £2,799
Gibson calls it the most astounding innovation in the history of the guitar, and if this baby can’t unleash your inner Hendrix then chances are that being  a rock god just isn’t for you. Featuring all of the luscious tone and effortless playability that you’d expect from from a Gibson guitar, the Dusk Tiger is rocking a stunning new look in exotic hard wood beaming with golden amber, dark chocolate hues and a redesigned fret board. Also featured are new, faster MCK and Robot Tuners, an automatic tuning system for the perfect sound. A four band parametric EQ allows for infinitely more tone shaping than a standard model and an eight-signal firewire output – one for each string and piezo pickup, means that you can digitally manipulate until your heart’s content.