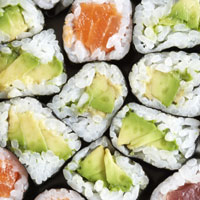 The term sushi does not in fact refer to raw fish, but to vinegared rice served with various fillings and toppings, which may include raw fish. With this in mind, sushi in some form has existed for more than two thousand years, although the dish of those days does not bear much resemblance to the modern cuisine.

What has developed into a culinary art in modern times actually began rather more humbly. Its origins can be dated back to the Seventh Century when Southeast Asians introduced a method pickling for preservation. This involved packing fish with rice and utilising fermentation to cause the pressed fish to pickle, a process known as nare-zushi.

This process could take up to one year to complete and meant that the rice portion of the dish was discarded upon consumption. Nare-zushi can subsequently be seen as the precursor to the modern dish.

The 16th Century saw the further development of sushi perhaps more recognisable to us today. A variant of the pickling process called namanare-zushi was developed and introduced the idea of using vinegared rice, which was consumed instead of being thrown away. It was also the first to utilise raw fish compressed into a mould and can be seen as the main precursor to the modern dish. This cuisine is in fact still alive and well today and can be sampled in Japan’s ancient capital, Kyoto.

It was however in the 1820s that Hanaya Yohei of Edo (the old name of Tokyo) developed the dish most similar to what we are served today. The serving of sashimi (sliced raw fish) with rice from a stall direct to customers marked an important sociological step in the dishes place in Japan’s culture and it was from here that sushi became a popular fast-food among Japanese.

The 20th century saw an explosion in the global popularity of sushi, buoyed by its healthy reputation and artistic presentation.  The most common forms now include Nigiri Sushi, (hand shaped sushi), Oshi-Sushi (pressed sushi), Maki-Sushi (rolled sushi) and Chirashi Sushi (scattered sushi). Now regarded as a culinary expertise, some chefs train for up to ten years to become an Itamae-San (expert chef); although increasing demand for has meant that many train for just a few years.
Where to eatGinza Kyubei, 8-7-6 Ginza, Chuo-ku, Tokyo
Luxuriously set on three floors in the central business district, Ginza Kyubei has been setting the standard for fine dining in Tokyo for years, making it one of the grandest and most prestigious sushi restaurant in the city. Revered for innovation, chefs here are credited with inventing  gunkan-maki, the wraparound technique for serving fish roe.

Sukiyabashi Jiro, 2-15, Ginza 4-chome, Chuo-ku, Tokyo
Old master and head chef Jiro Ono is fast approaching 80, but his restaurant shows little sign of waning in popularity, boasting Joel Robuchon, the world’s most decorated chef, as a regular and three Michelin stars. Be sure to try the Japanese horse mackerel, amberjack and Hokkaido sea urchin.
Daiwa Sushi, Tsukiji Fish Market, Tokyo
Located slap bang in the middle of the fish market, Daiwa Sushi offers some of the freshest cuts in the city. It’s worth getting here early as it tends to become very congested with the clamour to get the first catch of the day, but this proximity means some of the cheapest sushi in town is on offer; with a platter costing less than half the price of the downtown equivalent.