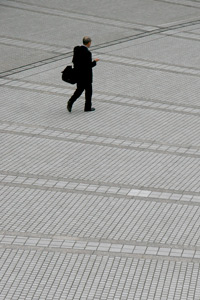 The word ‘indie’ is one of the fashion industry’s most covetable terms right now, but to survive the harsh retail climate and to tap into the values of the new era, other elements work a treat too – such as quality and upscale craftsmanship.

Priding itself on all of these components, it should be no surprise that London label Pokit is having a moment. As indie and underground as it gets, Pokit was founded in 1999 by Claire and Bayode Oduwole, who conceived their brainchild to bring an “innovative and fresh approach” to the fashion world. Having grown organically over the past decade without any financial backing whatsoever, the company started out with a miniscule budget of £500 – just enough to produce a set of four leather bags, which they sold from a humble outlet in London’s Maida Vale.

Fast-forward to 2010, and Pokit has extended it repertoire to offer a full range of suits, footwear, accessories and leather goods for both men and women. For a company as small as Pokit, it’s an impressive feat to serve up a range of fashion goods as extensive as that of firmly established household names like Margaret Howell and Paul Smith.

With the excess of the boom having deemed throwaway rags and fleeting trends somewhat redundant, Pokit’s classic essence and focus on quality feels more relevant than ever. Albeit advocating a decidedly clean-cut aesthetic, Pokit’s wares can be styled to look subversive or conservative as you wish, and this chameleon-like quality makes the label versatile as few. Distinctive and understated, but with an unmistakable edge, the label has been described as a young Hermes but it also exudes a quietly conceptual air akin to that of Martin Margiela or Comme des Garçons. In Japan, Pokit’s only wholesale territory, the mere mention of the name sends style mavens into a spin and its increasing cult status is undeniable.

Though the discerning fashion elite passionately embrace Pokit, it doesn’t cater exclusively to this achingly cool camp by any means. Pokit sits just as comfortably in corporate environments and can accommodate lawyers and business people looking to infuse a bit of character into their office get-up. To make sartorial life easier for customers, and entice them to come back to Pokit, all suits include a post-wear service to solve any minor mishaps in terms of the fit of the garment.

Recognising the fact that getting the fit right in a suit is as crucial as it is potentially tricky and even daunting, Pokit launched a bespoke suit service in 2005 called Fabri-k. To use the Pokit duo’s own description of the innovation, this is a “modern process to allow the mystical process of bespoke tailoring to be transformed into a modular one.”
Emma Holmqvist caught up with Pokit’s Creative Director and co-founder Bayode Oduwole to get the lowdown on the company’s ethos and its increasing focus on bespoke suits

Describe Pokit in a nutshell.
In essence, Pokit is a modern British brand. Without pushing a concept that is overly romantic about being British, our aim is to offer products that are designed in a modern, rational way, created using authentic manufacturing methods and materials of high quality. In Japan, Pokit is revered as a true cult brand, whereas in the UK it’s considered something of a ‘best kept secret.’ We’re still trying to figure out why Pokit is surrounded by such mystique, as for us it’s just a multi-disciplinary outfitter offering carefully designed and manufactured collections.
Being a small company, how did you manage to extend the offer from four bags to incorporate an all-encompassing range of footwear, suits, clothing and accessories?
Pokit is small but perfectly formed, but it hasn’t arrived at its current state by chance. By growing the brand organically ourselves over a long period of time, it’s allowed us to hone our skills and perfect the product offer and brand concept down to a T. We’ve researched every product area in minute detail over the past 10 years and experimented endlessly to get the best results. It’s been a tiring process, but definitely a rewarding one. Today we get the respect we deserve, and with our new retail space in Soho, we’ve come a log way since our humble beginnings in Maida Vale.

Who’s the Pokit customer?
The shop is frequented by ultra cool people, and this is great, but we want to convey the fact that we’re not elitist or dauntingly edgy at all. Everyone is welcome to visit the shop, and anyone can wear Pokit and make the look their own. A 20-year old rock star will look as good in a Pokit suit as a 70-year old gentleman, and increasingly, we attract a lot of media lawyers. It’s quite difficult for a brand to appeal to such a broad customer base, and without trying to sound pompous, Pokit could be called a phenomenon on those grounds.

You seem to focus increasingly on bespoke suits, was this move a conscious decision to fill a gap in the market?
Absolutely, we carefully studied the market and observed all segments, from high street brands to the most exclusive Savile Row tailors. We discovered clear limitations and noted the fact that this product group hasn’t developed at all. Thus, we set about to offer an extended range of suits to plug that hole and try to re-educate people that buying a suit doesn’t have to be an intimidating and precious operation. At Pokit, a suit looks like a suit and it smells like a suit too, but it’s executed in a new way and the method of buying is different, allowing the consumer to experience more intimacy with their purchase. What they’ll get at the end of the process is a robust suit that will last as long as clothes did in the past, although the design is modern.
To make a Pokit suit work its best in a corporate environment, what’s your top styling tip?
Pokit’s signature is cool, humorous and proper but never too serious – a formula that works well in corporate environments. We advocate a style that we call ‘never inappropriately dressed,’ which translates to looking good and respectable but never too straight-laced and characterless as the term ‘appropriately dressed’ suggests. It’s a huge difference between these two style formulas. Stepping into the office wearing a Pokit suit won’t make you look like a freak, but it will certainly make you look different. Still, the label is actually quite conservative at heart – it’s old-school stuff transferred to modern times. We never apply fashion fads or gimmicks; why apply 10 buttons to a cuff if it doesn’t add anything to the functionality of the piece? A Pokit suit works like a blank canvas, and how you wear it is up to you.
You’re known in the industry to have an encyclopaedic knowledge of fashion. Does this expertise benefit your work as Creative Director at Pokit?
It definitely does. To have an avid interest in the history of clothing and being able to reference archival styles are invaluable assets. This season, we’ve designed a pair of bright pink cords for men, and some people walk past the shop window pointing and laughing at the trousers as if they were silly fashion gimmicks. Actually, you’ll find very similar pieces if you walk down the classic menswear hub that is Jermyn Street, as this style of trouser is a true British classic. These referential designs work like a secret code if you’re in the know, and we love to incorporate historic elements wherever possible.