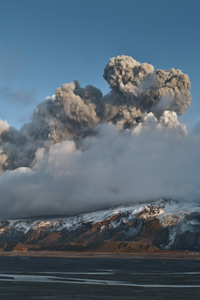 I’m sitting at Malta airport cursing the skies. It feels like something out of a scene from Lost, just without the umpteen luscious palm trees and – thankfully – plane debris. As I am fast discovering, an island isn’t exactly the ideal place to be caught during any sort of travel emergency and, along with my unhappy band of fellow stranded travellers, we’re wishing we’d stayed on the mainland – any mainland.

Sadly for me, my holiday plans quickly became null and void as, short of hopping on the nearest ferry to Italy and then peddling my way along to the south of France for my planned vacation, I wasn’t going anywhere. All around me people were in a similar pickle as they desperately tried to “get back to the office for a breakfast meeting at 9am” or “pick little Amy up from her auntie’s.” Never before had I looked at my island home as any form of entrapment, but suddenly I was ready to scale down the cliffs just to get off.

As the scene unfolded, and we all watched the telly goggle-eyed at the hundred of thousands of trapped people everywhere, it became evident that the whole of Europe had it bad. Train tickets turned to gold dust and motorways ground to a standstill. We now know that, as the Cloud marched its way across Europe, it wreaked the world’s worst bout of travel chaos since 9/11. Business travel took an instant hard hit; international conferences were cancelled and events postponed – many for months.

It all felt so unprecedented; as though the thought of no planes in the sky was completely new to us as a species. After all, what were our options? Weeks on, and now that the disruption has passed us by, the Cloud has managed to raise new questions about modes of transport. Personally, I’m still surprised that the idea of donkeys as viable travel substitutes didn’t take off.

Meanwhile, I think it is us islanders for whom the worry of the Cloud will live on the longest, as we nervously assess the real repercussions of how this could affect us and the industries around us. Among those worrying, niche Sicilian conference organiser, Roberto Risso, offers very real concerns for the future of his business. “We were hit hard by the cloud itself,” he remarks. “We suffered instant cancellations and other groups postponed their travel indefinitely due to the uncertainty. All that was frightening, but what is yet to come worries me more.

“The evolution of air transport has made it easy to get to and from an island, but now I think people are starting to rethink that. It won’t take much for businesses to exclude the idea of unnecessary business travel to islands completely, and to stay closer to home for their conferences, meetings or incentives. The Cloud has cost the travel industry billions – not just in cancelled travel plans, but in potential losses of business to companies all over the world. The full extent of those repercussions does remain to be seen, but I am not optimistic.”

Yes, in the event of an ash cloud it does seem that your whole world suddenly becomes a whole lot smaller. Without the option of ‘jetting off’ for the weekend, or even grabbing a freshly flown-in tropical fruit from the supermarket shelves, life does look a little dim. In fact, I may well find myself backing alternative plans to connect Malta to the rest of the world through a complex warren of under-sea tunnels or a nice cross-water train system. After all, we’ve got to keep our options open.

Weeks later and the threat of the Cloud still hangs over our heads in a frighteningly omnipotent and devilish manner. But what of my own future travel plans, I hear you ask? Well, they’re on hold until I’ve purchased a dinghy.

Jo Caruana is a writer, actress, and director of writemeanything.com, an innovative writing services company. When not trapped in Malta, she enjoys working as a travel journalist