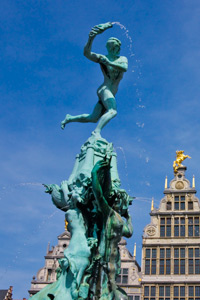 Antwerp epitomises everything you wouldn’t expect from Belgium: it’s fashionable, unstuffy and, unlike bureaucracy heavy Brussels and the open-air museum Bruges, definitely not dull. A city of some 500,000 people, and one still relatively unexplored by UK business travellers, Antwerp is probably best known as the centre of the European diamond industry and home to the Antwerp Six fashion collective. But with free onward connections for Eurostar ticket holders and a major new regeneration project coming to fruition, it is emerging as an important business destination. Proof, at last, that there’s more to Antwerp than big rocks and posh frocks.

The current buzz around Antwerp is the soon-to-be-completed redevelopment of Eilandje (Little Island), the formerly derelict harbour district. It will redefine both the physical appearance and cultural landscape of the city. Located to the northeast of the main square Groenplaats, but just a 15-minute walk to the traditional Old Town district, the waterside regeneration will be launched onto the international agenda in May 2011 with the opening of the Museum aan de Stroom (MAS).

This major new museum project will reconnect the people of Antwerp with their rich maritime heritage. Antwerp port is, after all, the second largest in Europe after Rotterdam. The Dutch architecture firm Neutelings Riedijk, won the commission for MAS with their warehouse-style design reflecting the heritage of the docks.

“MAS is a historic museum which wants to tell the history of the port, the city and its inhabitants,” says architect Willem Jan Neutelings. “But this building really has to become a public, living place and not just a depot for old stuff.”

MAS will be the crowning glory of the regeneration of Eilandje, but it’s not the only project underway. The Antwerp-based artist Luc Tuymans has been commissioned to design Museum Square immediately outside of MAS. His giant ‘Dead Skull’ mosaic, best viewed from MAS’s panoramic top floor, will fan out across the whole of Hanzestedenplaats. The Royal Ballet of Flanders will move to a purpose-built new space in Eilandje during spring 2011, while a slew of smart new places to stay, eat and drink are moving into the area in preparation for the renaissance. The pick of the bunch is currently Het Pomphuis (Siberiastraat; +32 3 770 8625; www.hetpomphuis.be), where the ambiance is very industrial-heritage chic with rough-stone walls and museum-piece machinery.

Further urban regeneration projects in Antwerp’s northern district will see Willem Dock become Antwerp’s new marina; Bonaparte Dock converted into a museum for old boats; and another new museum, People on the Move, housed in the former Red Star Line building. The latter will open in 2012. Further north again, the Cadix neighbourhood is being developed as a new residential district for families within walking distance of Spoor Noord Park.

Elsewhere in the city, other developments include the Flanders Congress and Concert Centre (FCCC). The British architecture firm, Ian Simpson Architects, has been awarded the contract to revamp the space with work centred on the Queen Elisabeth Hall. The project involves restoration of listed buildings and adapting the existing 1960s structure, plus a 2,000sq m entrance foyer and new connections to nearby Astrid Square. The 2,100 seat auditorium will be the new home for the Royal Flemish Philharmonic when the work is completed in late 2012.

Threads and rocks
Antwerp took its place on the world commercial stage in the 14th century, building a reputation as the most important trading and financial centre in Western Europe. Growth was based largely on its seaport and wool market.

But Belgium’s second largest city has always been its primary creative hub. In the 16th and 17th century it was home to great masters such as Rubens, Anthony Van Dyck and Jacob Jordaen; in the 20th and 21st centuries, it is a centre for fashion, design and architecture. Antwerp Zuid, the city’s southern district, is home to numerous Art Nouveau buildings, while the Antwerp Law Courts, unveiled by British architecture firm Richard Rogers Partnership in 2006, is an impressive piece of contemporary architecture.

To get a sense of Flemish style, head down Nationalestraat from Groenplaats to visit the city’s fashion district. In 1988, six members of Antwerp’s fashion school jumped in a camper van and headed to London Fashion Week. The so-called Antwerp Six returned home as heroes, having taken Belgian couture to the world. Paul Smith’s new flagship store recently opened on Kelderstraat, but local designers are still the favourite boutiques to flex the plastic. Head for Nationalestraat for Dries van Noten at number 16, Veronique Branquinho at 73 and Walter van Beirendonck nearby at 12 St. Antoniusstraat.

Or, for an alternative take on Antwerp’s fashion sense, take a stroll around the latest exhibition at the Modemuseum (MOMU). The modernist museum offers a glimpse of cutting-edge design from the next generation of graduates of the neighbouring FFI. Keeping with the art motif, the Museum van Hedendaagse Kunst Antwerpen, the city’s contemporary art museum, reopened last autumn with a new facade featuring artworks by Turner Prize-nominated artist Enrico David. Antwerp’s hip Photo Museum, meanwhile, is one of Europe’s best, featuring works by Anton Cobijn and Paul Seawright. The downstairs exhibition is free and the shop an ideal spot to pick up vintage Lomo and Holga cameras.

Also re-opened is the Paleis op de Meir, an 18th century city palace with a rococo style facade. In 1970 the Palace became the International Cultural Centre and, after that, the Film Museum. The building is now open again to visitors with a first-floor presentation of the Palace and its former inhabitants, plus the stylish Café Impérial for all-day snacks. Antwerp is also home to the World Diamond Centre and today the city handles 85 percent of the world’s rough-cut diamonds – but behind closed doors. The closest visitors can get to a precious mineral is to catch the latest exhibition at the Diamantmuseum. The museum hosts a regular programme of events, celebrating the glamour of the precious stone.

Ultimately, however, it’s the local speciality food and drink that makes Antwerp such a little gem. In fact, for a first-time visitor to the city, there’s no better way to take the pulse of Antwerp life at grass-roots level than by trying a couple of local delicacies – it’s the best of Antwerp yet most people often miss it.
Local treats
To really get to know the locals, simply join the queue at the local frituur: a simple, informal eatery and a Belgian institution. It’s a place where master fryers prepare superior fries and serve them in a paper cone. The best fries are prepared from Belgian Bintje potatoes, cut to a width of 11mm and fried twice for extra crispiness. The Flanders region is home to Belgium’s finest frituurs with Antwerp alone boasting over 200 frituurs. Crucially, they are seen in Belgium as a place where people from all walks of life can come together amid the informal surroundings of Formica tables and plastic sauce dispensers. Despite Belgium’s current linguistic and political divides, all men and women are equal when it comes to standing in line at their local frituur.

“As a country with no obvious symbols of nationalism, the humble frituur is our only symbol,” says Paul Ilegems, a historian and author of Frietgeheimen (Secrets of the Fries) and Het Volkomen Frietboek (The Complete Fries Book) amongst others. “It reflects the ad-hoc nature of the Belgian personality; our inherent indifference to aesthetics.”

On Groenplaats, with views across the square to the 14th century Cathedral of our Lady and a collection of works by Rubens, Fritkot Max (www.fritkotmax.be) is the oldest frituur in town. It dates, in fact, from 1842. The restaurant’s tiny upstairs room has an exhibition of art and memorabilia devoted to the history of fries, the artworks including a cheeky update of Rubens’ 1597 Baroque painting of Adam and Eve. The twist? Adam is tempting Eve with a cone-shaped bag of chips.

For another local delicacy, take a stroll through the cobblestone sidestreets of the Old Town to De Vagant or ‘The Troubadour’ (Reyndersstraat 25, +32 3 233 1538; www.devagant.be). A charismatic old cafe with heavy wooden tables, low lighting and the constant hum of conversation, this is the best place in Antwerp to sample jenever, a local take on gin, sometimes flavoured with fruit juices. De Vagant stocks over 200 varieties of jenever, with 40 fruit flavours from mango to cherry, plus several grand cru, grain-based varieties. Jenever flavoured with extract of juniper berry is the closest they serve to traditional gin, but it’s actually less popular in Flanders.

Jenever enthusiast Ronald Ferket opened the bar in honour of his favourite tipple in 1985 and has since become something of a jenever collector, both in terms of historical documents and new varieties of the liquor uncovered from old family recipes. “The first references to jenever date from the 17th century, with distilleries in northern Belgium and the Netherlands producing a ‘burnt beer,’” explains Ronald, sipping a cherry-flavoured shot. “Flanders remains the hub for jenever distilleries today, with production in Antwerp and Gent.”

Fried potatoes and firewater aside, Antwerp is evolving fast. With headline-grabbing regeneration and new ease of access thanks to those free onwards connections from Eurostar services, there’s a sense that Antwerp is about to blossom from rising star to fully-fledged world beater. So soak up the atmosphere and take time to get to know the locals. But one tip: just don’t mistake the Flemish for Dutch. Although Flemish is a dialect of Dutch, Antwerpians take offence at being called Dutch. Remember that – and don’t push in the queue at the frituur – and you’ll be fine.