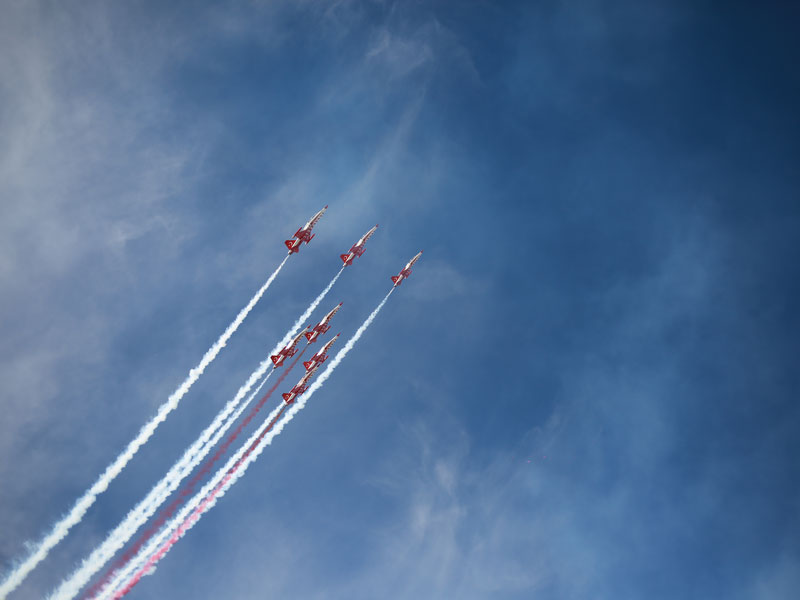 The Turkish Stars perform at the opening ceremony of Istanbul Airport

Nearly 104 million people flew through Atlanta, Georgia, in 2017. This meant that, for a 19th consecutive year, Hartsfield-Jackson Atlanta International Airport kept its grip on the title of the busiest airport in the world. However, it may soon have to defend its crown as a new challenger enters the market.

In 2018, Turkey unveiled a new airport in Istanbul, which it hopes will accommodate almost double Atlanta’s current visitor numbers. Turkey’s new airport, officially named Istanbul Airport – not to be confused with the already-operating Istanbul Atatürk Airport – is the crown jewel in the 15-year infrastructure boom President Recep Tayyip Erdoğan has brought to the country.

With a final capacity set to reach 200 million passengers per year, Erdoğan told the crowd at the airport’s partial opening in October that the project would help strengthen Turkey’s place on the global stage. Although Turkey has achieved impressive economic growth since 2000, 2018 was marked by growing fiscal pressures in the country. While Erdoğan promises a bright future for the airport, saying it will boost the economy and generate jobs, critics have warned that the projections are unrealistic and the airport’s development was simply designed to enhance the president’s image.

New global hub
Istanbul Airport is set to fully open to the public in March 2019 when the country’s flag carrier, Turkish Airlines, will transfer all its flights over from Atatürk Airport. The new airport, which is located on a nearly 80 million square metre plot of land to the north of Istanbul, reportedly cost around $12bn to construct. This makes it one of the biggest infrastructure investment projects in the country’s history.

Officials aim to position Istanbul Airport as the premier Eurasian transit hub, replacing Dubai International Airport, which is currently the world’s third-biggest airport and the busiest hub for international passenger traffic. With six runways planned, Istanbul Airport will fly to more than 350 destinations for 150 airliners when completed.

Assuming all of the plans are delivered on time, the airport could indeed become one of the largest in the world, Thomas Budd, a lecturer in airport planning and management at Cranfield University, told Business Destinations. But this achievement will face threats that are outside of the airport’s control, such as the state of the Turkish and global economy, global demand for air transport and the geopolitical situation of the region. “Also, it has to be assumed that other competing airports in the region will respond quickly to increased competition from the new Istanbul Airport, which will also have an impact,” Budd added.

Fadi Hakura manages the Turkey Project at the international affairs think tank Chatham House. Based on the Turkish Government’s track record with mega-projects, along with research that shows the airport’s projections were based on optimistic assumptions, he said: “In all likelihood, the projections will not be met and will probably cost the Turkish taxpayer hundreds, if not millions, of dollars or euros in subsidies each year.”

There are still factors working in the airport’s favour, however. According to an analysis of the air transport market in 2016 by the European Commission, Istanbul Atatürk Airport was growing at one of the most rapid rates of any airport over the 10 years to 2015, with an average annual passenger increase of 11.5 percent. By 2016, Atatürk was one of Europe’s top five busiest, with about 61 million passengers a year. In the decade to 2015, the European Commission found that most transfers at Atatürk occurred for flights between Europe and the Middle East or from one European country to another. Over the coming years, the number of flights between these regions is expected to increase.

But while Turkey’s East-meets-West location is ideal for such transfers, recent developments in modern aircraft may prevent the need for connecting hubs in the future. For instance, Singapore Airlines now flies non-stop for almost 19 hours between Singapore and New York City, and Qantas has a direct flight from the UK to Australia. Currently, many flights between these locations have a layover in Dubai or Qatar – the airports whose success Turkey aims to replicate. If air travel continues to progress in this direction, Hakura said it is likely that Istanbul Airport’s projected passenger numbers will not be met. “I’m not saying ‘maybe could’, I’m saying ‘will not’ be met,” he stressed.

Delays and controversy
The design of Istanbul’s new airport, which takes inspiration from Turkey’s domed mosques and baths, has been lauded. The airport’s tulip-shaped control tower won first place in the ‘Future Projects: Infrastructure’ category at the 2016 World Architecture Festival in Berlin.

Despite the airport’s gleaming appearance, the breakneck pace of its construction caused severe issues. IGA, the consortium behind the project, has been criticised over working conditions and safety standards at the building site: at least 27 workers have died on the site since work began in 2015 due to accidents or health problems, according to Turkey’s labour ministry. Workers also complained of bed bugs in their sleeping quarters and poor food quality. In September, police detained hundreds of protesting workers after more than a dozen were injured in an accident involving a shuttle bus.

Workplace accidents are troublingly common in Turkey. A report by the Assembly of Occupational Health and Safety said the number of deaths by workplace accidents in 2017 reached 2,006, up from 1,970 the previous year. From that total, 453 deaths occurred in the construction industry. On its website, IGA says it employs a zero-tolerance policy for occupational health and safety risks: “Our vision is to become a leading organisation in occupational health and safety by adopting the current and most advanced national and international practices in this field.”

Turkey’s numerous other infrastructure mega-projects have come under criticism for long delays and unnecessary costs. The Kabatas ferry connects Istanbul’s European and Asian sides, and in 2016 construction began to transform the ferry terminal into a seagull-shaped port complete with shops and galleries. But in recent months, reports have said the work has stalled. Meanwhile, a plan to build a pedestrian tunnel underneath the Bosphorus was cancelled in 2017, and the Istanbul canal, which would link the Black Sea and the Sea of Marmara for an estimated $16bn, has been called a “crazy” idea by President Erdoğan himself.

Precarious symbols of success
Erdoğan has constructed his reputation on Turkey’s mega-projects – from bridges to shopping malls to mosques – but the new airport carries a particularly significant political importance due to its scale and cost. While Budd said Istanbul Airport will represent “a bold statement about the ambitions of the role of an outward-looking, modern Turkey in the global economy”, critics argue it was not an economic necessity and is merely another prestige project that will allow Erdoğan to boast about the country’s achievements under his leadership.

For a time, the construction of mega infrastructure projects did drive economic growth in Turkey. Throughout Erdoğan’s time as president so far, the construction sector has grown from accounting for 12 percent of GDP to 17 percent. It is now a mainstay of the Turkish growth model. But, according to Hakura, that growth is unsustainable in the longer term. “In fact, it’s no longer sustainable even today,” he said.

Turkey’s mega-projects have largely been financed by dollar-denominated debt. With US interest rates climbing and Turkey’s currency plunging against the dollar, the country’s foreign currency debt has soared. By the end of 2017, the corporate sector’s foreign exchange liabilities reached a record $328bn. “Turkey can no longer absorb more foreign loans to finance these mega infrastructure construction projects,” Hakura said.

At a time when Turkey’s economic outlook is still fairly uncertain, the country would benefit from shifting towards a more sustainable growth model. But still, the government is pressing on with more mega-projects. Near the end of 2018, Erdoğan confirmed a tender would be held for the construction of the Istanbul canal despite a government freeze
on new investments.

Turkey can no longer rely on mega-projects to boost economic growth. If, instead of finding a more sustainable growth model, the government continues to depend on the construction of large physical symbols of its successes, it may find its foundations have been built on shaky ground.