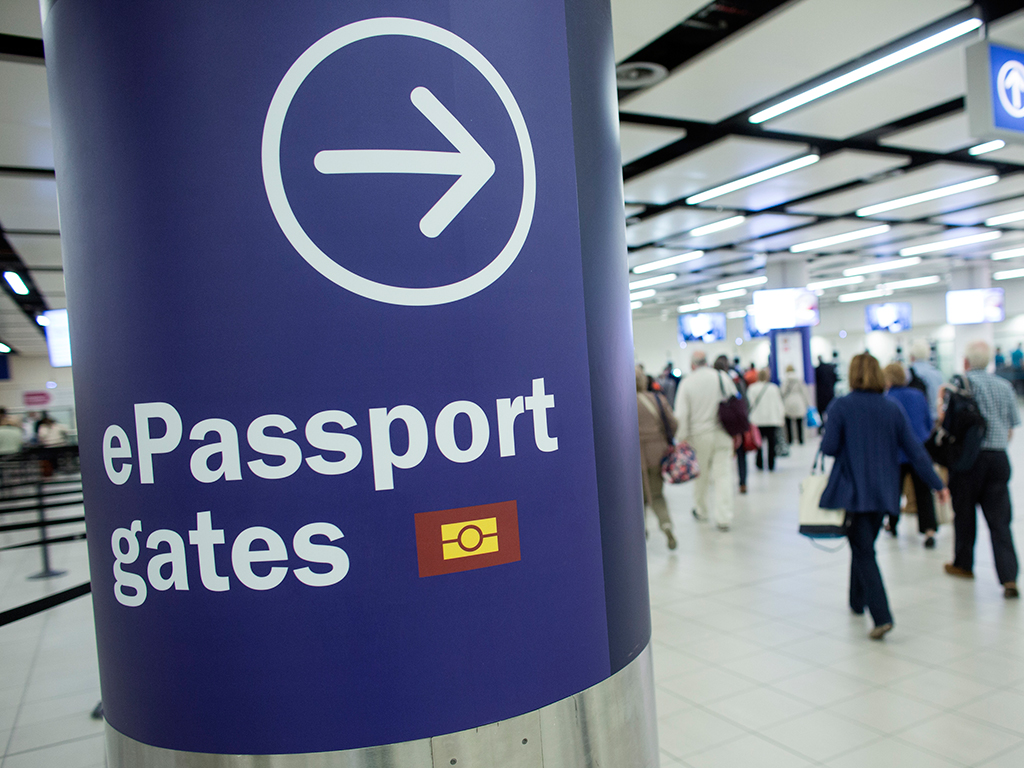 Trudging through an airport after a long flight has never been a particularly joyous exercise. Shortly after the unnaturally chirpy cabin staff finally agree to let you stand up, remove your hand luggage from overhead and disembark the plane, travellers are usually sent off on a unnecessarily long traipse through one of many advert-filled corridors that reach the chaotic confluence known as passport control.

Whereas in the distant olden days of about five years ago such places were filled with rows of stern looking border staff sat in impenetrable glass cocoons, now the more modern airports around the world have been quick to install self-service biometric ‘ePassport gates’ that read the recently issued ePassports. Designed not only to reduce staffing costs, but also to speed things up and get customers out of passport control and into the retail paradise that is the arrivals lounge as quickly as possible, ePassport gates in fact make the whole process a complicated charade that requires staff to be on hand to help baffled travellers work the biometric readers, as I unfortunately discovered on my return from a recent trip to Venice.

Incompetent travellers
As is tradition during the late summer, Gatwick airport was full of typically red-faced, overcooked British tourists, grumpily trudging back from their alcohol-fuelled European escapades. At the same time, however, there were many arrivals from other far-flung parts of the world; keen to sample the overpriced delights that London has to offer. By creating two options for all these people to choose from resulted in havoc caused to that greatest of British institution – the queue.

Determined not to be stuck behind this sea of angry travellers and armed with my newly issued ePassport, I opted for the shiny new gates of the future. Big mistake. As people took their turns at the gate, one by one they failed to work the passport readers, ultimately having to fetch a member of staff in irritated frustration, who promptly came to their aid with a look that suggested they were secretly pleased at the failure of the machines to render them obsolete.

Exasperated at my fellow travellers’ failure to work a simple piece of modern machinery, I impatiently waited until it was my turn, where I would show them all just how easy it was. Eventually that time came, and I nonchalantly walked up to the reader. Placing my passport down on the reader and looking up at the camera, I casually waited for the doors to open. Nothing.

As the crowds behind me started to get more irritated at yet another incompetent traveller, I wondered whether the fault was with my new passport photo and thought back to the concerned comment made by a passport centre employee about my head not fitting in the standard box size (mother tells me my head is large because of all my brains). Panicking that people were starting to stare at my freakishly big bonce, I was thankfully saved by a member of staff and let through.

Old-fashioned queuing
After this tortuously embarrassing wait, I vowed never to repeat the mistake of attempting to go for modernity over efficiency. As I set off on another trip – this time to Latvia – I dreaded the thought of returning to Gatwick’s mess of a passport control hall, and so determined to storm ahead of the competition and get my place at the front of the old-style passport check queue. Walking at a pace that made me look (in my mind) like an Olympic power-walker – but in reality like someone who was in desperate need of getting to a bathroom – I stormed past my fellow passengers and got to the back of the queue, safe in the knowledge it would be moving faster than the malfunctioning shambles of a barrier that was meant to be the future of air travel. Smugly glancing over hoping to see some poor tourist struggling to place their passport on the reader properly and having to call a member of staff to do it for them, to my dismay, all I saw were people breezing through the barriers without incident.

As I looked back at my queue, I soon realised that the party of at least 30 Latvians in front of me had not got their passports ready, while their leader – a cheery elderly woman – was engaging the passport control officer in an exhaustive description of all the sites they planned to visit in London on their trip. I didn’t make it through for another 20 pathetic, inefficient, stuck-in-the-past minutes.