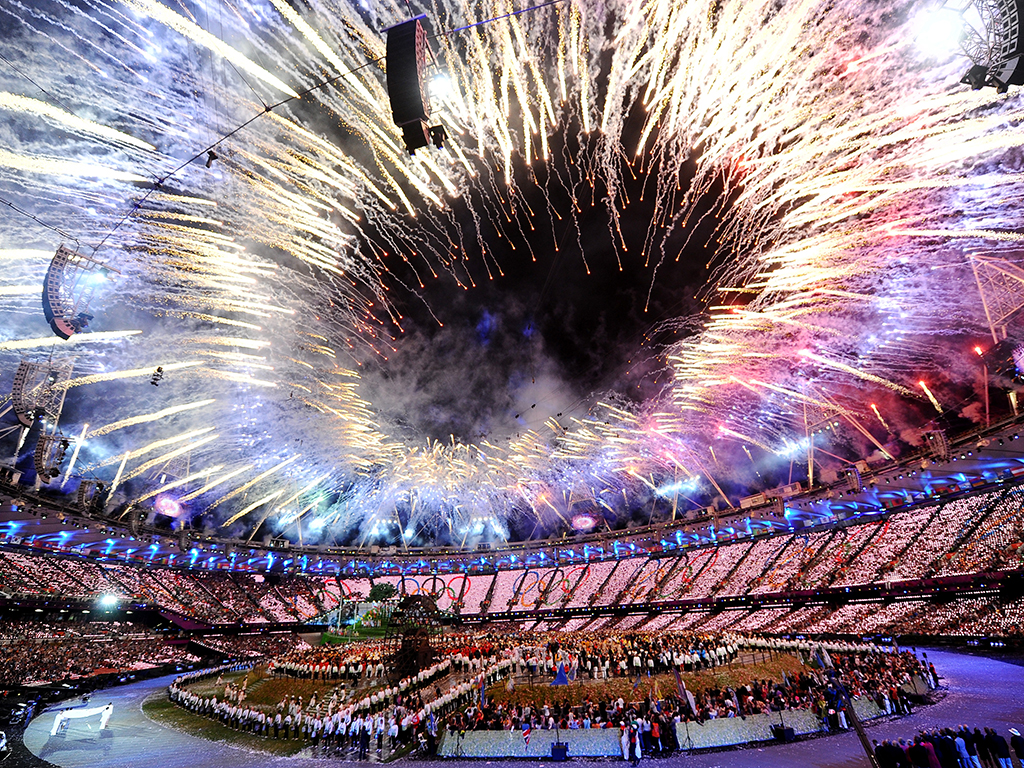 The opening ceremony of the London Olympics 2012. While some games prove worthwhile financially for countries, others struggle to recover from the staggering expenses incurred

The World Cup in Brazil was an exciting affair. Despite months of tension and violence in the lead-up to the first whistle, the event has been declared a success. Brazilians called the games the ‘Cup of Cups’ on social media, thanks to the level of football and the sense that disaster had been avoided. Before the ball had started rolling on the perfectly manicured green pitches, debate on international media had focused on whether or not Brazil was ready to host such a momentous event, and many questioned whether the hefty $14bn price tag was reasonable and worth it.

Total cost of each game:

The 2014 World Cup has been one of the most expensive global events ever put on. While it is difficult to say exactly how much it cost – estimates range between $11bn and $15bn – it is clear that this edition of the event cost considerably more than any other. It is also difficult to pinpoint exactly where all that money went. Brazil invested heavily in infrastructure development that was not strictly related to the games, but was fundamental to their smooth running, and many of the stadiums had to be built from scratch. But as soon as the games were underway, videos started appearing online of wobbly railings and unfinished work in the arenas.

The Brazilian Ministry for Tourism suggested the World Cup and upcoming Olympic Games will bring over $3bn to the economy, and potentially more in investments; but with a price tag at least three times higher than potential returns, suddenly a month of fun seems harder to justify. But is this discrepancy in returns unique to the Brazil World Cup, or final irrefutable proof that hosting big events is simply not worth it?

The Barcelona Olympic Games of 1992 have been credited with regenerating a struggling city and putting it in the spotlight of international tourism. On the other hand, the Athens Olympic Games in 2004 and their exorbitant cost have been linked to the later collapse of the Greek economy. Mauro Guillen, Professor of International Management at the University of Pennsylvania told Forbes that “rarely, if ever” do Olympic Games generate a profit for the host nation.

It is hard to calculate exactly how much revenue a mega event brings in because host countries’ economies are affected indirectly, and it’s impossible to put a value on publicity and media scrutiny. However, Moody’s estimated that despite the fanfare, the Brazilian economy will still underperform the global economy by as much as four percent this year, and it is unlikely that any positive economic impact will be felt by the lower echelons of the population.

It appears the tide is changing; where once cities and countries were falling over themselves to host these events, now they are turning their backs. Stockholm and Krakow have tactically removed themselves from the bidding to host the 2022 Winter Olympics, and only four cities have stepped up to the plate.

New York and Philadelphia also withdrew bids to hold global events; this trend is gathering pace. In times of tight budgets, it’s hard to justify spending billions on largely superfluous infrastructure. It is a worrying prospect for the future of mega events. If no one is prepared to make the investment, then the whole model must be readdressed.

Here, Business Destinations looks back at some of the most successful global events in recent history – and some of the biggest failures.

British Prime Minister David Cameron started his address at a business conference in Glasgow in July by suggesting the Olympic Games held in London two years ago boosted the UK’s coffers by a staggering $23.8bn. According to the UK Trade and Investment department, the internal target of generating $18.7bn by 2016 has already been surpassed, making the British Olympics a raging economic success. While this is clearly good news, the total cost of the games – reported as $15.2bn – is still enormous, although fractionally less than the predicted final cost.

The 2012 Olympics took place during a severe recession, with the population reeling from the effects of strict austerity measures imposed by the Government. London was using the occasion to rejuvenate its image, and re-emerge as an ‘Olympic Capital’ and more – a modern, cosmopolitan capital, always ready for business. Beyond that, the British capital was hoping to show itself as a new city of daring architecture, cutting-edge business and an urban centre that’s a tourist attraction in its own right.

The Olympic Games were particularly successful in London as they not only ran smoothly, but the city has been able to harness the enthusiasm that reverberated that summer into a lasting legacy of modernity. Though not all of the venues have been successfully converted or reused yet, the sense of euphoria and optimism that spread across the capital during the summer helped speed up the recovery of the British economy. The spiritual home of the Olympiad was denied the honour of hosting the centennial Modern Olympiad games in 1996 after the International Olympic Committee expressed concern about Greece’s ability to cope with the demanding preparations. Athens was instead given a further eight years to get into shape for the Olympics, and Atlanta was chosen for the centennial celebrations in its place.

Though no official figures have been released, Athens appears to have spent more than double its original budget preparing for the 2004 games, bringing the sum to $11bn – one of the most expensive games ever at that point. Sporting venues were scarce in Greece, so most of the Olympic facilities were built from scratch. However, where Barcelona had a considered legacy plan, Athens didn’t seem to have given it any thought at all.

Since 2004 as many as 21 of the 22 venues have been completely abandoned. Those numbers are staggering considering the Greek government claims to have spent around $672m in the upkeep of the arenas. But some stadiums have even had piping and windows removed by looters hunting for scrap. It has been suggested that the venues would be sold, but there has been very little interest from potential buyers. As the Greek economy fell into a bottomless pit of recession and austerity, the Olympic extravagance was once again brought into question. The games were supposed to launch Athens as a worthy European capital, a good place to do business and a modern city.

However, as the chronic mismanagement of the economy was exposed during the crisis, the exact opposite happened. The large amount spent preparing for the games has raised suspicion of corruption, and the glib attitude towards the Olympic legacy did more harm than good to Athens’ image. By the time the Sochi Winter Olympics opening ceremony began in February 2014, the games had been trending on Twitter for days – and for all the wrong reasons. The international press had arrived at the site in Russia to find sections unfinished. Images of half-built hotel rooms, brown drinking water and incomplete arenas soon made it onto millions of computer screens. Though amusing at first glance, bafflement followed when it transpired that the games cost Russia around $50bn – by far the costliest sporting event ever.

“If costs are the benchmark for a ‘successful’ Games,” Janice Forsyth, Director of the International Centre for Olympic Studies at the University of Western Ontario, in Canada, told Forbes, “Sochi is the most unsuccessful games in history, bar none.”

That said, it is too soon to tell the future of Sochi’s Olympic venues and whether or not they will be put to good use. Although Sochi only has a permanent population of 350,000, the Russian Government has already secured six years of Formula One Grand Prix to be held here. Persuading other big sporting and business events to utilise the winter games infrastructure could tip that balance in favour of success. Sochi was at a disadvantage as a completely unknown entity, but millions of people around the world now know its name. The 1992 Olympic Games in Barcelona have since been labelled the ‘model Olympics’ and can be credited with the wave of enthusiasm for hosting such events. The Games themselves ran smoothly, but the real triumph was the reinvention of Barcelona’s image. Before 1992, the area that is now Port Olympic was a degraded industrial zone and, despite Antoni Gaudi’s striking modernist buildings, and the lush parks adorning the turn-of-the-century boulevards, the Spanish city did not rank as a desirable business or tourism travel destination.

Between winning the bid in 1986 and the opening of the Games in July 1992, Barcelona spent $11.4bn, the majority of which went into the construction of Olympic venues, the Olympic Village, and supporting infrastructure such as new roads. But the real coup was to use this initial work as a way to boost interest in the city as an investment opportunity. Barcelona had a well-thought-out image development strategy and all construction was envisioned with this rebranding in mind.

The city was the first to set out a clear ‘legacy’ plan, and it made no secret of the fact that the Olympic Games were a vehicle for self-promotion. The city’s entire Olympic preparation process was carefully designed over two years before the bid was won to ensure their goals were achieved. Every new piece of infrastructure had a future role in Barcelona’s daily life. Turisme de Barcelona, the local tourism board, capitalised on the city’s new image and promoted it relentlessly. It worked: Barcelona is now the fourth most popular tourism destination in Europe. In 2007 the Catalan capital was voted fourth best European city to do business in by estate agency Cushman & Wakefield in a report for Bloomberg Businessweek; the city only ranked 11th in the same survey in 1990.