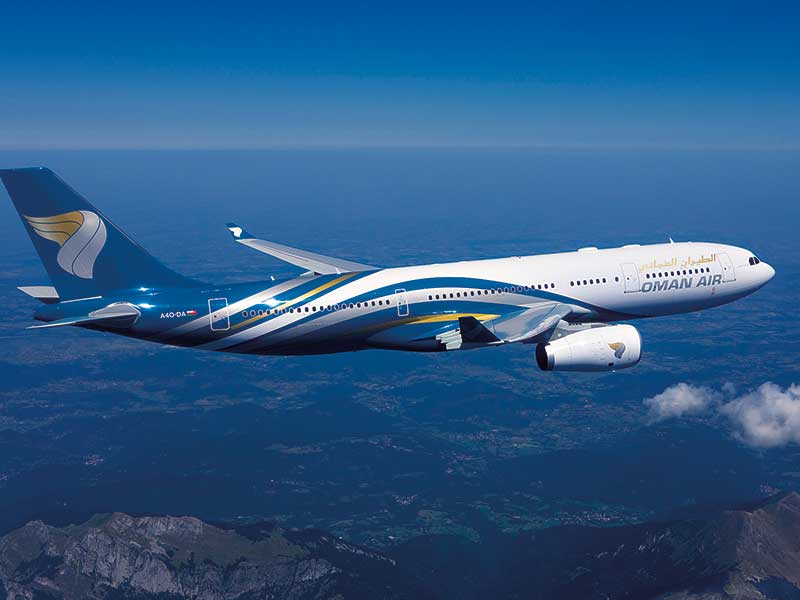 More than 7.7 million passengers travelled with Oman Air in 2016

Oman Air is the flagship carrier of the Sultanate of Oman and an official four-star airline as rated by Skytrax. Since being founded in 1993, the airline has witnessed massive growth and now plays a major role in consolidating Muscat’s position as a leading traffic hub in the Middle East, supporting the commercial, industrial and tourism sectors.

The airline is currently focused on its dynamic programme of route and fleet expansion. At the end of 2016, the airline introduced its first destination in China, along with a four-times-weekly flight to Najaf, Iraq. Network developments are continuing apace in 2017, with a revised flight agreement with the Indian Government resulting in increased frequencies to five of Oman Air’s 11 Indian destinations and a new four-times-weekly flight from Muscat to Nairobi launched at the end of March this year. At the end of May, the airline launched a new daily flight from Muscat to Manchester, UK.

These route expansions are supported by the growth of the airline’s fleet. Oman Air is continuing with this ambitious expansion plan in 2017, having already secured four new additions to the fleet this year alone. The latest aircraft was the Boeing B787-9 Dreamliner, which joined Oman Air’s fleet in April, alongside the Boeing 787 Dreamliner, which joined the fleet in February. Two new 737-800s were also added to the fleet in January and February this year.

An important development in Oman Air’s continuing expansion and increased product offering in Europe and the North Atlantic has been the new codeshare agreement between Oman Air and Lufthansa. Since the end of March, it is now possible for Oman Air to add Muscat to Munich and Frankfurt flights under a Lufthansa codeshare. Oman Air will move terminals to the Lufthansa Terminal 2 in Munich and Terminal 1 in Frankfurt, providing connectivity to 59 destinations in Europe and the North Atlantic.

The continuing development of Oman Air in the last six months demonstrates the airline’s unwavering commitment to becoming a successful, sustainable company of the highest quality. Continuing to differentiate is Oman Air’s key focus, and its strategy is to stand out by reflecting the Omani national character. All passengers are guaranteed Oman’s unique hospitality, and Oman Air continues to fly the national flag with pride. Every aspect of Oman Air’s service is achieved to the very highest standards, providing passengers with the best possible experience.

New menus have been developed for first class, business class and economy class customers flying on European routes. The airline has introduced new and improved inflight entertainment systems, which offer an increased choice of recently released Hollywood movies and a broader range of TV programmes. A new safety video, which showcases the destination of Oman and its rich historical and cultural heritage, was also introduced last year. In addition, cabin crew are undergoing enhanced training to ensure all customers are offered the very best inflight service.

Trained for quality
Oman Air is also continuing with its broad human resources strategy of recognising the skills, abilities, commitment and contributions of all staff, regardless of their backgrounds. The company has worked hard to increase the employment of Omani nationals, and now more than two thirds of the airline’s workforce originates from Oman. October 2016 also saw a move to put Oman Air at the forefront of pilot and cabin crew training with the unveiling of the Oman Air Flight Training Centre (OAFTC). This state-of-the-art facility is the first of its kind in Oman.

The development of OAFTC took months of preparation, and the completed facility gives Oman Air three important advantages: first, to offer pilots and cabin crew the highest standards of training, in accordance with civil aviation regulations and industry good practice; second, to enhance the high level of efficiency to which Oman Air is required to work; and third, to provide the opportunity for substantial cost savings by operating world-class training facilities in-house, and being able to offer its services to other commercial partners. The new facility will also provide valuable benefits to Oman as a whole, including employment opportunities for Omanis.

In pursuit of excellence
Oman Air prides itself on being an award-winning airline. Accolades received in the last 12 months include World’s Leading Airline – Economy Class at the World Travel Awards, and Foreign Airline of the Year by Sector to the Middle East at the annual KLIA Awards, which were introduced in 2006 to recognise the best in the Malaysian aviation industry. Oman Air also received the coveted Signum Virtutis – the seal of excellence – from the Seven Stars Luxury Hospitality and Lifestyle Awards 2016, where it was also named Best Airline in the Middle East, Africa and Europe.

The airline was also named the Best New Carrier of 2016 at the Council of British Hajjis’ annual meeting, while it was also awarded the Best Arab Air Carrier Supporting Arab Tourism award, presented at the 2017 Arab Tourism Media Awards ceremony organised by the Arab Centre for Tourism Media. Oman Air has also received recognition for its premium lounge in Muscat International Airport, where guests receive a great range of complimentary food and beverages, Wi-Fi access and massages. However, the airline’s accolades are not limited to passenger operation: Oman Air Cargo was also awarded Best Cargo Airline for Valuable Goods – North and East at the India Cargo Awards 2016, held in Delhi.

Off the runway
Supportive of local sporting talent, Oman Air is proud to help focus global attention on Oman’s athletic achievements. The airline sponsors Oman’s number one motor racing star, Ahmad Al Harthy. In just six years, Al Harthy has firmly established himself as one of the most talented sportsmen in the Middle East, and is widely considered to be Oman’s shining light in global motor racing. The talented Omani started the 2017 season in Italy with a thumping victory, after a strong run during the official pre-season test at the Circuit Paul Ricard in France in March.

Oman Air also supports Oman’s seafaring tradition with its ongoing sponsorship of Oman Sail. This partnership combines expertise in the air and on the water, and is a strong platform through which to introduce sailing audiences and media around the world to Oman and its national airline. The airline has also supported the NBO Golf Classic for four consecutive years, promoting both the airline and the destination to a key target audience.

It’s not just those in the media spotlight that benefit from Oman Air’s support: Oman Air is proud to be working closely with the Ministry of Social Development to improve the lives of Omani citizens. The airline has expanded its range of community initiatives to support eligible individuals in reaching their full potential and to achieve a rewarding and balanced life. Oman Air also provides vital backing for a range of educational, cultural and sporting initiatives which not only help to improve the lives of individuals, but also make an important contribution to the economic and social wellbeing of the country.