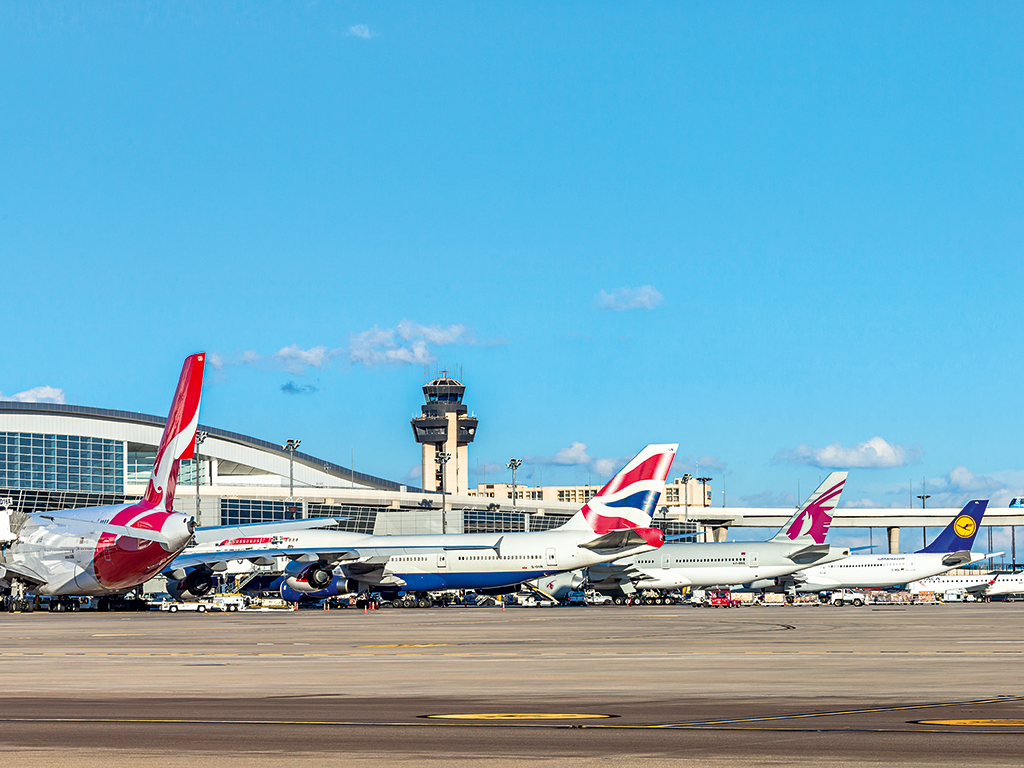 As one of only seven airports in the world with nonstop service to more than 200 destinations, Dallas/Fort Worth (DFW) International Airport has become an internationally renowned transport hub. Celebrated not only for its great connectivity, but also for its size, outstanding customer experience and its operational excellence, DFW is situated in a sprawling plain between the cities of Dallas and Fort Worth, Texas – one of America’s most aviation-centric regions.

2014 – DFW’s 40th anniversary year – served as one of its most significant milestones, with major new connections established around the globe and significant operational and customer service advances made. The airport was also awarded the Business Destinations Travel Award for Best Airport, North America in the same year.

DFW airport is an ideal and convenient global gateway for millions of customers, and one of the best available points of entry in the US for international travellers

Connecting the world
DFW ranks as the world’s third busiest airport, with more than 1,900 flight operations scheduled daily. The airport and also ranks ninth globally in terms of customers served – DFW hosted 62.9 million passengers in 2014; a new all-time high for the airport. Additionally, DFW serves as a home to American Airlines, as well as being the airline’s largest hub. In total, DFW hosts 24 airline carriers, providing nonstop access to five continents from north Texas.

The airport has been rapidly expanding its international service in recent years. 2014 saw the launch of DFW’s first airline service to Shanghai and Hong Kong via American Airlines, as well as new services to Doha, Qatar via Qatar Airways and Abu Dhabi via Etihad Airways. In addition, Emirates Airline and Qantas Airways each expanded their service at DFW, by adding the Airbus A380 to their Dubai and Sydney routes respectively.

A hub of activity
Because every major city within the continental US can be accessed in less than four hours from DFW, the airport is an ideal and convenient global gateway for millions of customers, and one of the best available points of entry in the US for international travellers. And while the transport hub is known worldwide for its impressive size, DFW’s Skylink transportation system makes transfers between terminals quick and stress-free.

But DFW is more than just big: with regards to its customer service, the airport has ranked in the top 10 for large airports worldwide in Airports Council International surveys for the past eight years. DFW also offers its customers a wide variety of world-class shopping and dining options, as well as outstanding amenities and services. Customers can shop in small, boutique shops, brand name outlets or duty free stores, particularly in the airport’s renowned international terminal, Terminal D, which opened in 2005.

For passengers seeking a little relaxation, the airport offers services including a nap centre, spa services and the free DFW Yoga Studio. Customers can then enjoy a delicious meal from the airport’s selection of 150 restaurants, which serve a variety of cuisines and healthy entrees. Further exceptional amenities include free wi-fi and power charging stations throughout all five terminals, a walking path for exercise, an art programme with an accompanying podcast, and children’s play areas in four of the terminals.

Supporting travellers
DFW also features industry-leading solutions for processing passengers through immigration and security checkpoints. In 2014, thanks to the full implementation of DFW’s new Automated Passport Control (APC) system, DFW customers saw a 50 percent reduction in customs processing time; from an average waiting time of 28 minutes to an average of 14 minutes. The APC system features electronic passport processing for eligible international travellers – including customers from all 38 nations that hold visa waiver agreements with the US – as well as for all lawful permanent residents (‘green card’ holders). Customers with carry-on luggage only can also enjoy an expedited exit from the customs area via a newly designed exit route.

In an effort to elevate the DFW customer experience even further, the airport launched a Terminal Renewal and Improvement Program (TRIP) in 2011. In a bid to improve its four original passenger terminals, the $2.9bn project is seeing the overhaul of everything from parking technology and dining options to energy efficiency and environmental impact. The four original terminals are also currently being renovated from floor to ceiling, replacing and innovating infrastructure with more efficient systems and improved layouts in parking, security checkpoints and concessions areas. By the end of 2014, DFW had completed over half of the project work for Terminals A, B and E, with the newly renovated spaces having already been a massive success with passengers from across the globe.

The immense renovation project is a demonstration of how the airport is rethinking the ways in which it supports travellers on each step of their journey. Once the project is complete (estimated to be in 2020), travellers will have access to a truly world-class airport experience, complete with a brighter and more modern atmosphere and more places to shop, dine and charge mobile devices.

Convenient transit
Conveniently located halfway between Dallas and Fort Worth, Texas, in the fastest-growing metropolitan region in the US, DFW Airport is within easy reach for thousands of visitors due to the superb transport options in and around north Texas. These include six major highways and, as of August 2014, the Dallas Area Rapid Transit (DART) Orange Line. One of DFW’s milestone achievements for last year was the launch of this passenger rail service, which travels from downtown Dallas directly to the airport. This expansion of the DART light rail line signalled the beginning of a new era for convenient and cost-effective transit connectivity for airport customers.

“Passenger rail has long been a strategic goal, and represents a critical component to DFW’s status as a top-tier international gateway”, says Donohue. “With the DART Orange Line connecting DFW to downtown Dallas, DFW Airport is now on a par with global hub airports that have integrated rail, which is a major selling point for customers and conventions.”

DART’s DFW Airport station is located less than a three-minute walk away from the Terminal A entry doors and ticketing hall. The five-mile Orange Line segment provides continuous service to major regional destinations, in particular around the Dallas area. In the coming years, DFW Airport will be collaborating with the Fort Worth Transportation Authority to provide additional passenger rail services from Fort Worth.

DFW International Airport has succeeded in its original vision of placing the Dallas/Fort Worth region on the world stage as an economic powerhouse. Approximately 60,000 people now work within the airport’s expansive territory, and DFW additionally supports a total of 143,000 full-time jobs in the area – accounting for a total payroll of around $9.4bn. DFW’s total annual economic output amounts to a staggering $31.6bn for the north Texas region, with cargo activity accounting for about $16.7bn of that total.

With 40 years of operations and development now under its belt, DFW continues to search for ways to elevate the travelling experience for its customers. The airport’s plans for 2015 include additional international service launches – most notably to Beijing – and the creation of a new high-end international traveller lounge. As its founders envisioned when the airport first opened in 1974, Dallas/Fort Worth International Airport is indeed succeeding in its mission of connecting the world.