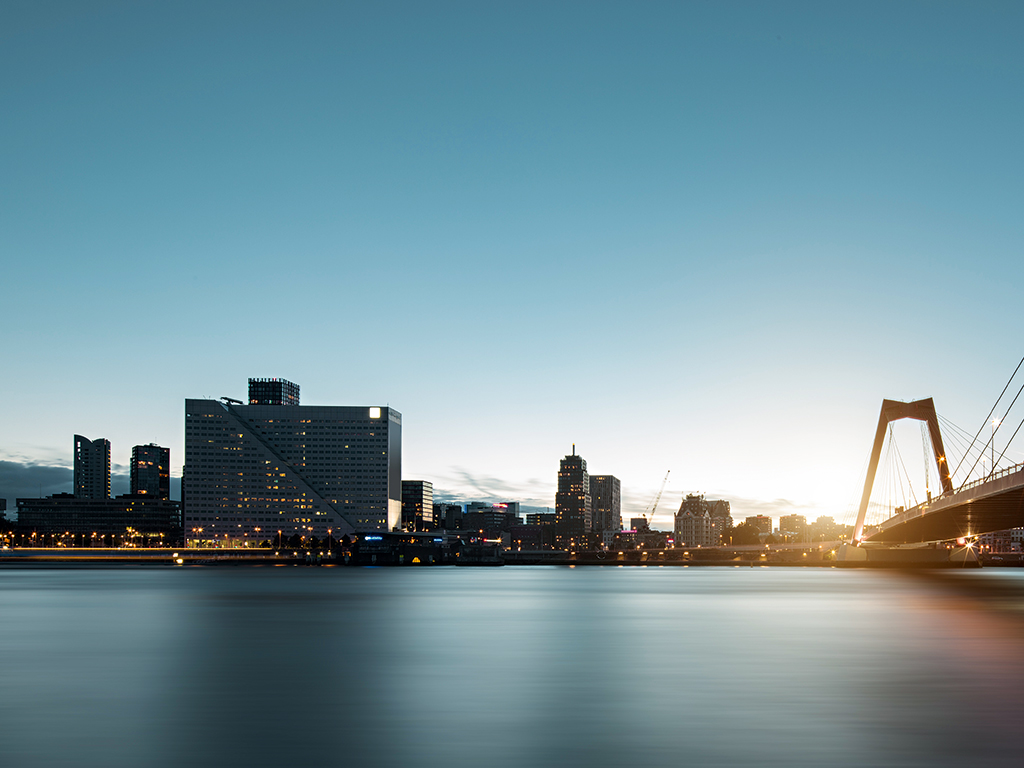 Rotterdam's Willemsbrug bridge. The city is paving the way for a sustainability revolution, slowing building a circular economy

In 2013, Stockholm-based H&M became the first name in fashion to launch a global garment collection initiative, wherein the retailer called on shoppers to deposit their unloved or unwearable items in-store. By repurposing said garments, the company could more easily “close the loop on textiles” and minimise – if not eliminate – waste product from its supply chain. “We’ll invest any money we make from this service into social projects, as well as research and innovation projects on how old textiles can be turned into new fibres. Which means in the future we’ll be able to get rid of clothes waste altogether”, the company said at the time.

However, the initiative, while impressive, marks only a small part of a much wider – albeit thinly spread – global movement to consume and produce in a more circular fashion. Take, make and use: these are the steps that best characterise society’s one-way relationship with consumption at present. These steps have left untold measures of waste in their wake, yet an awareness of the repercussions, for both the planet and for local communities, has forced policymakers to take action. As a result, the transition toward the circular economy is slowly gathering momentum.

With a shortage of examples of circular economies in action, implicated parties will find it difficult to believe the transition is possible, or indeed profitable

“While there is still room for the linear model to expand geographically and realise even higher efficiencies, there are signs that the coming decades  will require productivity gains and quality improvements at a new order of magnitude”, according to an Ellen MacArthur Foundation report, Towards the Circular Economy. “It is evident that an economy that extracts resources at increasing rates without consideration for the environment in which it operates, without consideration for our natural planetary boundaries, cannot continue indefinitely”, added Unilever’s Chief Executive Paul Polman.

Leading the charge
In Rotterdam, however, the concept of a circular economy is catching on fast. The prospect of a place where nothing is lost and everything is reused carries with it a certain appeal for this port city’s inhabitants. Arguably the most important and, by some stretch, the largest logistical hub in Europe, Rotterdam stands as a shining example of how cities can play a key part in paving the road to sustainable prosperity – responsible for 30 percent of Europe’s import/export transits and home to any number of multinational corporations, a strategic vision to apply this circular model to Rotterdam before 2030 could have far-reaching consequences for the European and global economy. Calculations carried out by both the Ellen MacArthur Foundation and MicKinsey show that if the continent were to “wholeheartedly adopt the principles of a circular economy”, the European manufacturing industry could enjoy a pick-me-up of €500bn – and that’s excluding the benefits that this would bring for its inhabitants.

“We are currently working with the municipality and the Port of Rotterdam to make better use of the huge circular opportunities for Rotterdam”, Arjanna van der Plas, Communications Manager for industry cooperative Circle Economy, told Business Destinations. “Taken as a whole, this area represents the combination of heavy industry with high economic and material throughout, social and cultural centres, and rich ecosystems. What we aim for is to create a stronger link between the activities in the Port of Rotterdam and the city, specifically small-scale entrepreneurial activities that create more localised streams of added value, and to realise symbiotic opportunities for smart resource management and cascading between the port, Westland, and the city.”

A plan to turn Rotterdam into the most sustainable port city in the world before the end of 2015 has prompted the city’s Port Authority to jump into action, and so make substantial progress on the issue of circularity. True, fundamental change does not come without sacrifice, though the transition means that cities and businesses can engage with the environment and the community in a far more meaningful way – and by heightening productivity, while at the same time eliminating needless waste processes, the city can more easily realise new and sustainable opportunities.

Van der Plas claims that the reasons why the idea of the circular economy has received so much attention in recent years are twofold: first, people are beginning to realise that “it is possible to make money with the circular economy approach – it is not something that you just do extra for the greater good, like double-sided printing to save money. It can be the core of your business model and can be very profitable”. Second, “companies start seeing the effects of not going circular. For example, large technology companies see how vulnerable they really are to volatile resource prices and the geopolitics that come with the smaller and smaller amount of available resources – they start to see that our planet is indeed finite, and that they have to act in order to be future proof”.

Circularity Centre
In the summer of 2014, the Port of Rotterdam Authority, Rabobank Rotterdam, Bikker & Company and Van Gansewinkel joined forces in a bid to establish a so-called Circularity Centre. “The scale and diversity of economic activities in the region and the [international] connections of the ports mean the region is well placed with a vast array of opportunities”, according to a report commissioned by the Port of Rotterdam Authority and Rabobank on the subject. It continued: “Operating the port as a circular economy would create value-adding activities based on reusing waste and increasing eco-effectiveness and thus helping to achieve environmental goals. Furthermore, a circular economy would help the port community identify new business opportunities, creating new clusters of industrial activity or refining and strengthening existing clusters.”

However, the project is not free from challenges, and there are inevitable hurdles associated with the newness of any given idea. New laws and regulations must be enacted so as to eliminate those that currently inhibit the transition, and it must be considered that affected parties, such as waste treatment facilities, have a vested interest in keeping to the current system. Add to that a shortage of examples of the principle in action, and implicated parties will find it difficult to believe the transition is possible, or indeed profitable.

“No-one can build a circular economy alone”, says van der Plas. “It requires a mind shift away from our current linear ‘take make waste’ thinking, toward a system where we act in balance with the planet: the ecosystem that we are all part of. That requires changes in politics, business, education etc. It’s not something that happens overnight unfortunately.” Nonetheless, if the city were to embrace the initiative, it could mark the birth of revolutionary business concept, bringing with it a host of new opportunities for those in and around the region.