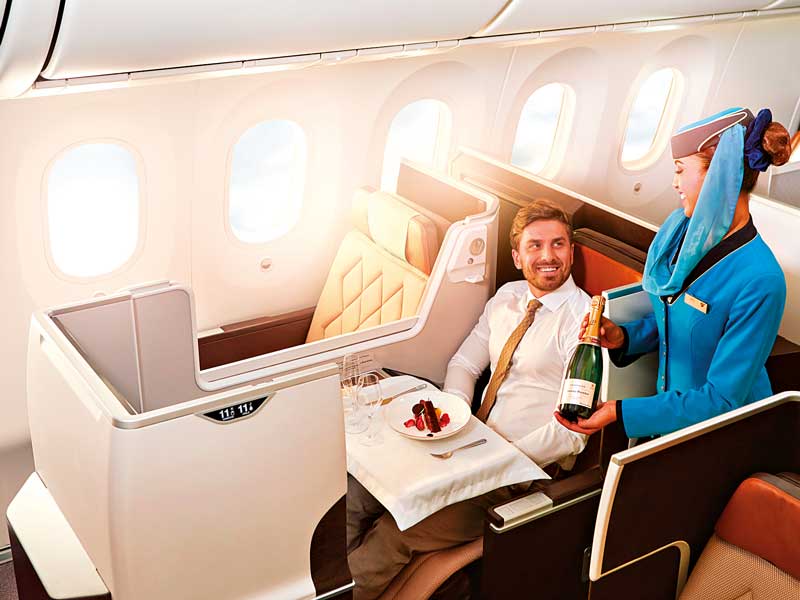 Oman Air has developed rapidly since its conception 25 years ago, and last year more than doubled the number of flights it operated in comparison with its 2016 figures

Oman Air is the award-winning national air carrier for Oman. The airline has developed rapidly since its conception 25 years ago, and last year more than doubled the number of flights it operated in comparison with its 2016 figures.

This outstanding growth is testament to the pivotal role Oman Air has played in making Muscat a major traffic hub in the Middle East, opening Oman to commercial, industrial and tourism opportunities. The airline now flies to 11 destinations in India and 40 destinations worldwide, including the Middle East, Africa, Europe and the Far East.

Expanding horizons
Recent route launches include a daily flight to Turkey’s most famous city, Istanbul, and the four-times-a-week service to Casablanca in Morocco. Oman Air’s Boeing 737-800 is deployed to Istanbul while the Dreamliner 787-800 operates the Casablanca route.

In October, Oman Air will achieve another two milestones as it launches a daily flight to Russia’s capital city, Moscow, and relaunches its service to the Maldives. The growth of Oman Air’s flight system is down to the hard work of its network and planning department, which strives to meet the demands of its customers. With all new route launches, Oman Air not only endeavours to provide a seamless service to its guests but also to strengthen relations between countries.

The number of years Oman Air has been named Best Airline in Europe, Middle East and Africa

The resumption of the flight to Malé in the Maldives came about as a result of the airline listening to customer feedback. Well known for its beaches, blue lagoons and extensive reefs, the Maldives is an incredibly popular tourist destination and the number of visitors it receives is only increasing. Oman Air hopes to encourage guests flying to the Maldives to stop over in Oman en route.

The Indian subcontinent has been at the heart of Oman Air’s operations since the launch of its flight to Trivandrum – one of the airline’s first international flights – 25 years ago. The company currently operates a service to Goa six days a week, plus flights to Mumbai, Delhi and Hyderabad three times a day.

In 2017, Oman Air launched a service from Salalah to Calicut, and has also increased the frequency with which it flies to a number of locations in India and Pakistan, Islamabad, Karachi and Lahore, as well as destinations such as Colombo in Sri Lanka and Kathmandu in Nepal.

Last year, the Seven Stars Luxury Lifestyle and Hospitality Awards named Oman Air the best airline in Europe, the Middle East and Africa for the second year in a row. In the same year, the airline expanded its Africa network with the launch of a four-times-weekly flight to Nairobi.

Oman and Kenya have been trading for many years, and there have been recent moves to increase collaboration between the two countries and develop their trade relationship – a task that will be aided by the increase in flights running to the country. More recently, Oman Air received permission to temporarily operate two additional flights to Cairo, Egypt, during summer 2018.

Oman Air’s significance in the Far East is increasing too; it introduced a four-times-a-week flight to Guangzhou, China, at the end of 2016. The airline also flies to Thailand, the Philippines, Indonesia and Malaysia. It is hoped that Oman Air’s newest Dreamliner will soon be deployed on Far Eastern as well as European routes.

First-class fleet
Over the past few years, Oman Air has expanded further into Europe and has introduced a twice-daily service to London Heathrow and a daily flight from Manchester. European routes have increased in frequency, with the airline offering more trips to Zurich and its flights to Paris increasing from five times a week to daily. To demonstrate its commitment to Europe, the airline has just launched its newest Dreamliner on the Muscat to London route.

This latest Dreamliner features a new first class section with eight private suites, plus 24 business class seats and 232 economy seats. First class guests are treated to unparalleled comfort with one of the longest 180-degree flat bed seats available on any commercial airliner, while the fully enclosed first class suites have 55-inch doors to ensure complete privacy.

The aircraft is equipped with industry-leading technology and the latest developments in comfort and amenities, including cutting-edge entertainment to improve the journey for guests in every class.

Fleet expansion has been critical in supporting Oman Air’s route expansion. In addition to taking delivery of the first of three Dreamliners in June, Oman Air also welcomed its third of 30 Boeing 737 MAX 8s.

The 737 MAX offers customers exceptional performance, flexibility and efficiency, with a lower cost per seat and an extended flight range that will open up new destinations in the single-aisle market. Oman Air expects to receive a total of five 737 MAXs by September 2018.

Closer to home
Oman Air is not only concerned with expanding its international network and growing its fleet: closer to home, the company is seeing record numbers on many of its daily flights to Salahah during the khareef, or monsoon, season. The khareef, which begins every year on June 21 and ends on September 21, is considered to be one of the most important tourist seasons in the Gulf as the weather is much cooler than in the rest of the region.

Locals and tourists alike flock to Dhofar to enjoy the greenery of tropical wadis and watch the surrounding mountains become cloaked in mist. Salalah, a major city in the region, hosts the annual Salalah Tourism Festival, which is becoming increasingly popular among Gulf nationals, expatriates and foreign visitors. Presenting theatre, art, sport and shopping, the festival offers a full look at Oman’s cultural heritage.

The khareef isn’t the only reason to visit Oman. The destination has year-round appeal, and Oman Air works closely with the Ministry of Tourism to promote the various attractions available to visitors. The capital city of Muscat has a wealth of stunning landmarks that showcase the splendour of Islamic architecture; the Royal Opera House, Sultan Qaboos Grand Mosque and Mutrah Souq are a few that shouldn’t be missed.

For coast lovers, the northern region of Musandam is home to an abundance of dolphins and breathtaking fjords. Meanwhile, the stunning mountain range of Jebel Akhdar has a number of world-class hotels. Ecotourism is also flourishing in the country; the turtle reserve at the easternmost tip of the Arabian Peninsula at Ras al Jinz is an excellent example of this growing trend.

When visiting Muscat, Oman Air’s guests are now treated to the new state-of-the-art passenger terminal. Oman Air operates up to 200 flights per day from the new terminal at Muscat International Airport, which won the Leading New Tourism Development Project award at the 2018 World Travel Awards.

Oman Air’s first and business class guests can enjoy warm Omani hospitality at the stylish Premium Lounge, which offers a calm environment amid the commotion of travelling. In fact, every aspect of travel with Oman Air is designed to be stress-free, from the selection of locations, chosen for their convenience, to the luxury seating and in-flight entertainment.