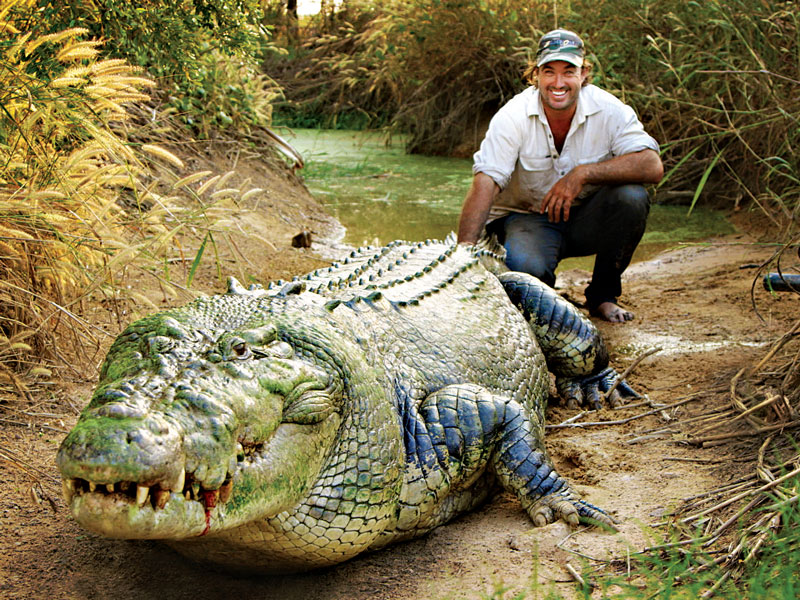 Having worked as a plumber, driller, helicopter pilot and served in the army, Wright is concentrating on crocodile wrangling and running tours

Born and raised in the wilderness and fighting deadly snakes from the age of six, Matt Wright has carved out a career in just about every adventure field going. Previous job titles on his CV include horse wrangler, army soldier, mustering pilot, crocodile egg collector and, since 2011, star of National Geographic’s international success, Monster Croc Wrangler.

As the lead in the hit show, he works with co-stars John ‘Jono’ Brown and Chris ‘Willow’ Wilson to catch and relocate crocodiles to less-problematic areas in the rugged Northern Territory, helping preserve the species.

It’s a risky business, but it’s far from his only one. Wright’s exploits have taken him all over Australia and beyond, and today he leads tours around the region for travellers wanting to get up close and personal with some of the world’s deadliest creatures, reaching remote, nigh-on-untouched areas in airboats and helicopters from his own luxury camp near Darwin.

He spoke to Business Destinations about how it all began, where his varied career has taken him, and the risks he’s taken – both physical and mental – to get where he is today.

Where did you grow up and how did your career begin?
I grew up in South Australia, and from there our family travelled a lot. We’d go up to the east coast of Australia, up to the Cape York Peninsula in Far North Queensland, and every school holiday we’d be out doing something different. Then work took me all over the place – Fools Lagoon Creek in Queensland, the snowfields in South Victoria, cattle stations around Ayers Rock.

But you have to be quick; as soon as we hook [the crocodile] we have to cash the profit

After that, I worked [in] Alice Springs as a plumber, before eventually joining the army, then becoming a driller and after that getting my chopper licence, which was now about 14 years ago. I mustered all over Australia and Canada, rounding up cattle from my chopper. So I’ve had quite a few different jobs.

How did you become a crocodile wrangler?
I was into wildlife at the age of four, and I was out catching some of the deadliest snakes in the world when I was six. Then I got involved with the wild harvest, which basically involved collecting crocodile eggs which landowners would get royalties for in return.

We also relocate crocs that are causing issues in a certain place, either moving them to another location in the wild or putting them in a croc farm where they have plenty of space.

The National Geographic TV Monster Croc Wrangler series kicked off in 2011. How did it all start?
While I was up north doing all that – catching crocodiles, collecting eggs, rounding up cattle, breaking in horses – I started filming. National Geographic [was] interested, and two or three years later I got a call saying we’re in Australia, let’s catch up and try to make this work.

Sure enough, it did. We’ve done three seasons since and we’re just about to start producing season four.

What do you do when you’re filming?
It’s really simple: we get up and have our little team meeting in the morning and decide what we’re doing that day. Are we setting traps? How are we going to work this? We set everything up ready to go, check the cameras are all good and then lead up to the action.

How do you catch the crocodiles?
You watch the animal, walk in, and then try to get it to spin around and try to bite you. Once it does that you have to throw a rope over its top jaw, then pull him in, get him up out of the water, secure his mouth and put a needle into him if he’s over 14ft just to calm him down.

Then you put him under a tree and let him settle – that’s it. But you have to be quick; as soon as we hook in we have to cash the profit and make sure it’s not stressing out.

Is that stressful for the animal?
Have you seen what crocs do to each other? Crocs will literally tear each other to bits and then swim away. They might not be happy about it at the time, but we do it to protect them by relocating them elsewhere. It’s all about looking after and preserving them so they don’t get killed.

What are your most memorable moments from filming?
I reckon it has to be Jono getting pumped by a bull in season three. He was trying to catch it and eventually went in to grab it, but it charged at his chest and lifted him and flattened him. He had a little bit missing from his face. It was fine because it didn’t have horns, and I knew it was going to give him a little rub. Nothing too bad.

Do you ever get nervous?
There are times you end up in a position you wish you weren’t in, and definitely, yeah, it puts you on your toes. Every year’s different – you push yourself a little bit more. I haven’t had any bad injuries, but you do get little fights.

I’ve had a few scuffles with crocs and I’ve been horned by a few bulls while catching cattle. I got double barrelled in the chest when I was breaking in a horse, and I’ve been taken off my feet a few times, flying six foot in the air and landing on my head.

The worst one was probably breaking my ankle, [fibula], foot and toes from a horse-riding accident. I was just home for Christmas and mum was running late for dinner, so I went for a ride and ended up in bloody hospital.

What other business ventures do you have?
I lead various adventure tours in the Northern Territory, starting at my luxury tented camp, where the group gets to meet my 17ft pet croc, Tripod.

We take people out on deep-sea fishing trips as well as airboat and chopper tours to visit the local crocodiles. I’ve got Bone Cruncher, Chug, Nitro, Otis and Sweet Thing – they’re all wild, but they come up to see me because I’ve lived here my whole life and I know it all so well.

You can see lots of other wildlife too – pretty much anything you can find in the top end of Australia, from dugongs to wallabies, buffaloes to turtles. It’s an amazing experience. It’s mainly small groups, but we also do some big corporate incentive-based trips, so then we can have a hundred people coming through.

What does the future hold?
I’m focusing on the filming and we’ve also just launched two new ventures – Darwin Airboat Tours and Top End Safari Camp, which is exciting. Location-wise, at the moment I’m based in Darwin. It’s great and I love living there, but it’s hot, so in time we might find somewhere else, somewhere with easier living. But for work, freedom and adventures, it’s great.

What is it about the great outdoors that you love so much?
It’s just one of those things. Everyone’s different – some people love shopping, some people love getting out there and having an adventure, some don’t. Why? I don’t know. I just grew up doing all this, and I love it.