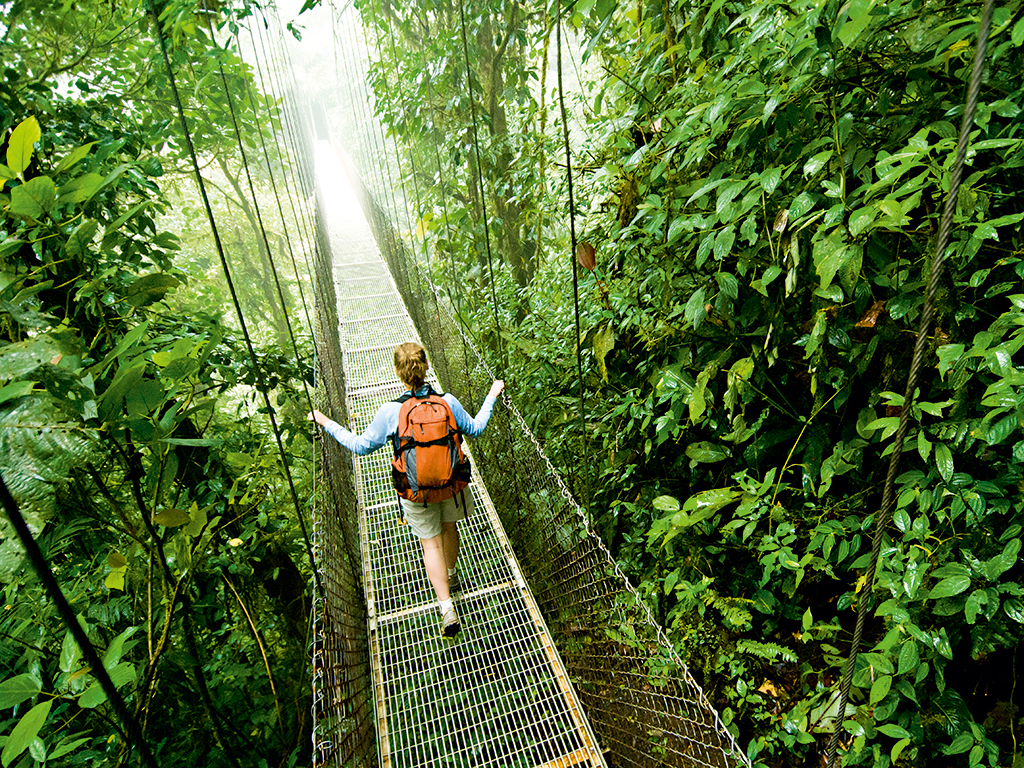 Destinations such as Cuba, Colombia, Burma, Mexico, Brazil and Jordan have become more popular with tourists as adventure travel rises

Climbing Mount Kilimanjaro, base-jumping off a cliff or trekking through the Sahara might not be at the top of everyone’s to-do list. But adventure travel – once limited primarily to gap year-takers travelling to Outer Mongolia in order to find themselves – is fast becoming mainstream.

This means that sun, sea and sand – the three ingredients that once promised families everything they’d ever asked for – are gradually being outpaced by hikes, wildlife treks, biking expeditions and cultural tours; the key trends seen in 2014, according to the Global Report on Adventure Tourism, published by the Adventure Travel Trade Association (ATTA).

The sector – defined by ATTA as involving a combination of physical activity, a connection with nature and cultural immersion – is growing faster than ever before. It expanded at a rate of 65 percent year-on-year between 2009 and 2013, reaching an estimated worth of $263bn in the US and Europe alone, the report found. According to ATTA president Shannon Stowell, 80 percent of tourism boards now consider adventure travel a standalone sector – compared to just 40 percent eight years ago.

While the most under-developed areas are still limited to ‘hardcore adventurers’, destinations such as Cuba, Colombia, Burma, Mexico, Brazil and Jordan – which are partially developed but not overly commercialised – are becoming increasingly popular. This rising segment and the subsequent change in target destination could pose a direct threat to more traditional, static beach holidays – a sector that’s been largely dominating the industry for several decades.

Hungry for experience
The growth of the experiential travel sector is being driven by a number of factors – not least, according to Stowell, a general consumer shift away from a desire for material possessions and towards an interest in actual experiences. “There have been numerous consumer studies that show people are more and more leaning towards experiences versus stuff, and I think that’s definitely driven more people towards travel”, he says.

An even bigger driver seems to be the fact that adventure travel is now considered safer and more affordable than it was just a few years ago. That’s something that Alistair Butchers, Innovations Manager at tour operator G Adventures, agrees with. “The world has become a lot less scary”, he says. And, interestingly, he puts this fact partly down to the influence of social media: “The social revolution has certainly contributed to this, as people can almost sample a destination before they set foot on a plane.”

Butchers seems to have a point. What was once the utterly unknown – a mystery to be pierced only by the most intrepid of travellers – is now accessible at the click of a button. A scan of Google Earth, a photo on Facebook or a quick scroll through a blog post can bring the most remote corners of the earth to the fingertips of a budding traveller on the hunt for their next big holiday.

It’s not just social media driving the change. From TV documentaries to Lonely Planet travel guides, trips previously considered adventurous, daring or dangerous are being firmly drilled into the mainstream market – the very demographic that was the driving force for package holidays for so many years.

Tour operators catering to that market and creating interesting, customised or unusual itineraries are therefore thriving, and new companies are cropping up rapidly to get in on the game, according to Niall Douglas, Managing Director at luxury booking service Full Circle Travel. Acquisition activity in the sector has also increased: in 2011, TUI and adventure tour operator Intrepid Travel joined up in a high profile venture to form Peak Travel, and in 2012 All Leisure Group bought the unprofitable, over-55s operator Page & Moy, enabling the company to expand its target demographic. This rise in activity is being driven by – and so, in turn, further fuelling – the population’s swelling appetite for adventure travel.

Saving time
Catering to that older market – one that goes beyond the 20-something backpacker hoard – is perhaps where the adventure travel industry is changing most, as recognised by Full Circle’s Douglas. “The biggest shift, I think, has been the over-50s, who are now happy to walk the Inca Trail, explore the South American Jungles or trek though Indochina”, he says. This is, again, a major segment of the package deal market – a market that the adventure sector seems to be capturing rather successfully, with this age bracket now one of the biggest drivers of adventure tourism, according to Stowell. “I’d say it’s primarily 40- to 65-year-olds who are paying for these activities”, he says. “They’re busy, they’ve got some income, and they want the best trip possible, so they’re hiring professionals.”

What this means is that shrunk-down, month-long versions of gap-year-type experiences (dubbed ‘micro-adventures’) are becoming more and more popular. “People are storing up their four- to five-week holiday and cramming it together”, Laurence Bresh, STA Travel’s Marketing Director, told TTG Digital. “Sometimes they’re doing in four to five weeks what they might have done in four to five months.”

G Adventures has noticed the same trend: bookings for its trips lasting 25 days or more increased 30 percent between early 2013 and 2014, according to the TTG report.

Baby-boom backpackers
Douglas believes that increased interest on behalf of a wider market is partly down to the simple fact that the original backpackers – the baby-boomers who first made travel a big deal – have now gotten older. “I think that we are now seeing the first true backpacking generation grown up with families and wanting to retrace steps or see destinations that they may have not seen first time round”, he says.

This is driving a boom in adventure travel among families, which is in turn accounting for some of the biggest growth in the sector. “Many parents have travelled with us when they were younger and now have families of their own. They want their kids to see the world with them”, says Butchers. In response, companies are releasing new products – G Adventures, for example, has launched a new line of family trips for this year, offering everything from tours of Thailand to snorkeling in Jordan.

The company is targeting beach breaks directly: on the Jordan page, the G Adventures site reads, “The worst part of resort vacations? Trying to find a spot to lay out your blanket on a crowded beach. Solution: visit Jordan instead! The beach never ends here.” The types of package holiday where poolside loungers might sit sipping piña coladas are, once again, being threatened by companies looking to capitalise on the consumer’s appetite for adventure.

And G Adventures isn’t alone: as if in a bid to protect itself from the drift away from more traditional vacations, US resort company Destination Hotel & Resorts recently plunged into the family adventure sphere with its Destination Family Escapes scheme; offering everything from a treasure hunt at a spa in Santa Fe to caving in the deserts of Oregon.

Striking a compromise
By combining a more traditional, hotel-based holiday with elements of adventure, Destination Hotel & Resorts is adapting to, and capitalising on, a new trend where traditional beach meets modern adventure. Stowell believes that this could define the future of mainstream travel, with the most successful companies likely to be those offering various options. He gives an example: “You’ve got a cruise ship that pulls into port – you can either go on a shopping trip or dive in a cenote.”

That might indeed be one answer for holiday companies looking for a response to the gradual shift away from sun, sea and sand. What other answers there are remains to be seen, but one thing’s for certain: consumers are getting ever hungrier for adventure, and the industry must adapt accordingly if its biggest players are to survive.