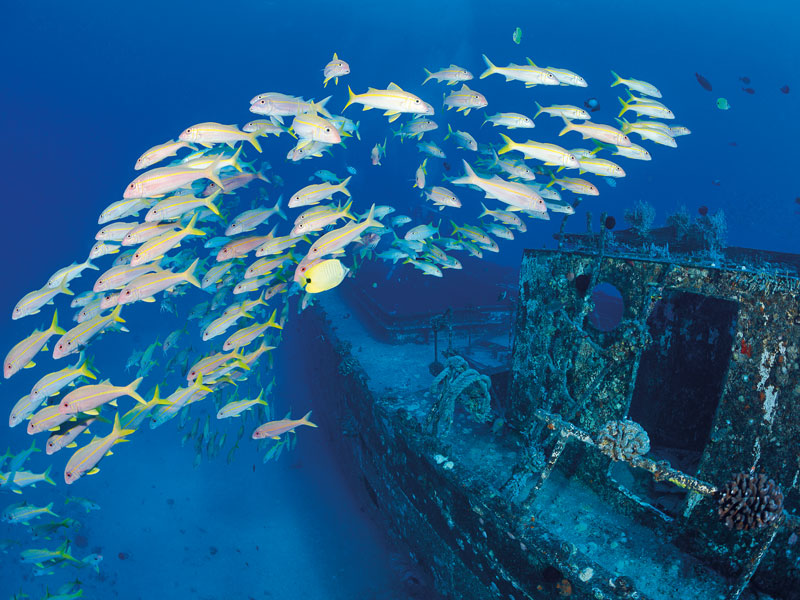 As Elon Musk strives to make space tourism happen, a rival trend has been picking up speed: underwater tourism. It is well documented that, while the surfaces of the Moon and Mars have been largely mapped out, it is our oceans that are the unchartered frontier of the world.

So far, humans have only fully explored a tiny proportion of the world’s oceans, and there are endless species yet to be discovered. Civilians may be set to pick up some of the slack, however, because it is becoming increasingly fashionable to venture into the deep.

Submarines were traditionally made with scientific research or military operations in mind, but they are gradually being steered towards the emerging underwater tourism market.

In part, this is because owning a submarine has become something of a must-have accessory for the upper classes. In certain crowds, it has become a status symbol to have a personal submarine as an accompaniment to a superyacht.

Late last year, Aston Martin announced that it will soon unveil its own design, which promises to reimagine the usual clunky ‘yellow submarine’ aesthetic in favour of a sleek silver exterior. Meanwhile, the Neyk, the result of collaboration between Ocean Submarine, MTU, Bosch and Rolls Royce, is a teardrop-shaped luxury underwater capsule fitted out with a full galley, bar and library.

While the surface of the Moon has been largely mapped out, it is our oceans that are the unchartered frontier of the world

Underwater tour companies are also springing up to offer tourists a glimpse into the deep. One example is luxury travel company Blue Marble Private, which will soon begin underwater tours of the Titanic at $105,129 per person (the exact cost of a first-class ticket on the RMS Titanic’s inaugural journey, inflation adjusted).

But the deep sea need not be such an extravagance: at the more affordable end of the spectrum is the $800 Explorers Dive hosted by Substation Curacao, which takes tourists on a 90-minute journey past a shipwreck and down to the 1,000ft-deep abyss of a sea aquarium reef.

Surfing the web under the waves
The new possibilities for underwater tourism have been enabled by big changes in underwater technology, such as improved battery life and acrylic windows.

John Ramsey, Principal Design Engineer at Triton Submarines, explained the difference between the submarines being made today and the military submarines of the 1950s: “Decades ago, venturing beneath the waves meant hulls of steel – rolled, welded and stiffened, and with relatively tiny viewports providing mere glimpses of the ocean beyond.”

But new materials mean that it is now possible to create a much more manoeuvrable and comfortable craft. Furthermore, the strength of acrylic windows means modern submarine design now features a round bubble window with almost 360-degree vision, creating a kind of inside-out aquarium for its passengers.

Power storage technology has also been a big part of the change: “Batteries, particularly lithium-polymer-based cells, continue to get easier to manage and more energy dense, allowing for longer dives and simpler maintenance in a more compact package,” explained Ramsey.

It’s even possible to gain access to the internet underwater. Erika Bergman, Chief Pilot for Aquaticus Submarines, has spent several years experimenting with different methods of bringing the internet below the waves.

Talking to Business Destinations, she explained that her first attempt involved stretching an ethernet cable from a server inside someone’s house round a tree and across the beach, ultimately reaching the inside of a submarine through its top hatch.

A more promising tactic she has employed since, however, involves linking a fibre-optic cable from a ship above. The cable goes “directly into the sub through what is called ‘through-hole penetration’ – the submarine can be deep down beneath the water and the cable can go upwards into a ship,” Bergman said. In the past, she has orchestrated Google hangouts from under the sea. The first underwater Instagram stories are surely not far off.

The twilight zone
Ultimately, when it comes to submarines, everything is about depth. Bergman explained: “If you’ve never been underwater, then the most interesting thing is the surface. This is where you see the pretty tropical fish and the things you’ve grown up seeing in picture books.

It is diverse, colourful and active.” She believes it’s worth going deeper, though. “If you go down 1,000m, then you are going to be in that alien world where everything is translucent and doesn’t have eyeballs.”

This is known as the ‘twilight zone’, and is beyond the reach of sunlight. It is at these kinds of depths that tourists might even catch a glimpse of a new species that has not yet been discovered by humans. “It’s so common to see something that has never been seen before,” said Bergman, talking about her experiences of deep dives.

Predictably, the price of undersea explorations varies dramatically depending on how deep you want to go. According to Ramsey, a two-person submersible capable of reaching depths of 300m costs around $2.5m, while one rated for 500m will cost around $3.2m.

One that is 2,000m-rated would set you back around $5.5m. “Increasing the depth necessitates a corresponding increase in the thickness of the hull, the capacity of the batteries, the use of exotic materials, the weight of the submersible, the test and certification regime and so on, all of which affects the price,” he explained.

Citizen exploration
While the market for personal submarines is picking up, it is not yet clear what the superyacht crowd will end up doing with their new deep-water toys.

We are looking at a scenario where civilians – rather than just ocean scientists – will be able to go where no one has been before, and play the role of explorer.

Notably, Bergman said that it is not out of the question that one day your “ordinary ma and pa” will be able to buy their own submarine. This would make it possible for ordinary people to go on day trips to explore reefs, go shipwreck hunting or discover a new species.

In fact, as well as hosting Google hangouts from under the sea, Bergman spends her time pushing for a new era of ‘citizen exploration’. She has founded a site called OpenExplorer, a type of digital field journal where anyone from professional adventurers to civilian explorers can publicly plan and document their own expeditions.

One can imagine a future where this could provide a framework for people to organise collaborative undersea adventures and collectively document their underwater discoveries.