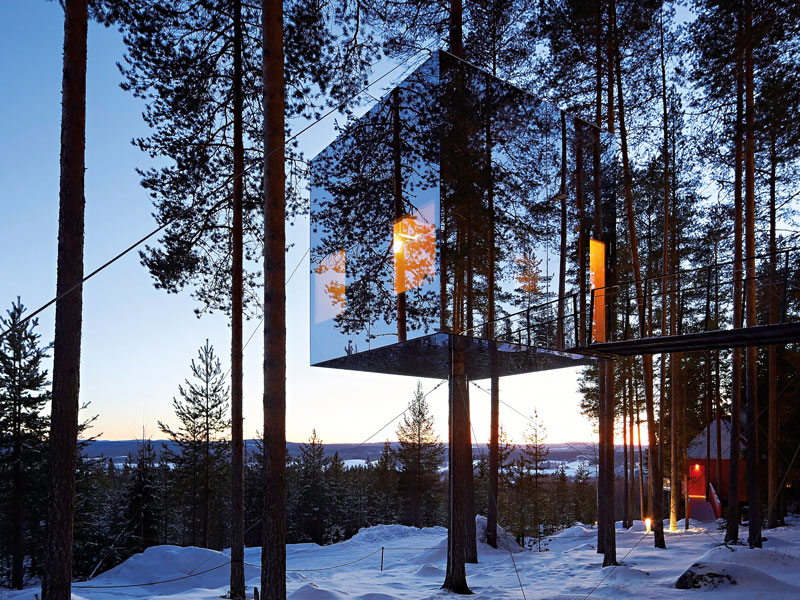 Sometimes, it’s better to stand out for blending in. This less-is-more approach is the name of the game for ‘landscape hotels’, the term for accommodation that is harmoniously integrated with its surroundings. Such hotels highlight the natural beauty of the area in which they are situated, allowing guests to revel in the wonders around them. They offer a fresh perspective on how structures can fit into their environments, using natural materials and sustainable building methods to adapt to the landscape, rather than disrupt it.

With a more eco-friendly approach in mind, landscape hotels are often minimal and organic in terms of their interior design, too. They are usually located in remote places – areas in which nature is free to reign uninhibited. Such hotels give guests the rare opportunity to really immerse themselves in their surroundings.

Here, we list six of the most unique and awe-inspiring hotels that weren’t built to stand out from the crowd, but rather to let nature do the talking.

The Mirrorcube, Harads, Sweden
When it comes to blending in with the background, the Mirrorcube is unlike any other hotel in this series. The double suite – one of seven unique offerings by Swedish trendsetter Treehotel – is set inside a hanging aluminium cube cloaked in reflective glass.

Measuring four metres cubed, the Mirrorcube offers a marvellous treetop hideout, camouflaged by its mirrored exterior and integrating perfectly into the surrounding forest. The interior is a masterclass in minimalism: the clean design, featuring birch wood throughout, will leave guests with a feeling of serenity that can only be achieved when one is surrounded by nature.

With a double bed, toilet, lounge and rooftop terrace, the Mirrorcube offers low-key luxury; showers and a sauna are located in separate buildings, but a short walk away. Advertised as “the landscape hotel where nature and imagination run wild”, the Treehotel, which also offers the whimsical bird’s nest tree house (a suite camouflaged by a giant bird’s nest), gives guests a rare opportunity to disappear into Sweden’s spectacular woodlands.

When listing hotels built into their natural environment, it would be remiss not to mention perhaps the most famous: Sweden’s Icehotel. The first hotel to ever be made entirely from ice and snow, since 1989, the Icehotel has been rebuilt and reborn with a new design each year. To achieve this stunning feat, around 40 artists from across the globe are invited to create new art and structures from the snow and ice, which then come together in each unique instalment of the Icehotel. Only existing for a few months of the year, it’s a bittersweet exhibition.

Set in the tiny, charming village of Jukkasjärvi, some 200km north of the Arctic Circle, the Icehotel offers guests a magical escape into its dream-like surroundings. Visitors have the choice of staying in a cold or warm room – the former boasts a distinct aesthetic appeal, while the latter appeals to guests who want to explore the nearby wilderness during the day. A mixture of the two over the course of a stay is recommended. The Icehotel is a magnificent exercise in creativity and ingenuity that offers guests a rare glimpse into the wonders of nature in this winter wonderland.

Located in the Sassi di Matera, a UNESCO World Heritage Site in Italy’s southern region of Basilicata, Sextantio Le Grotte della Civita offers a unique insight into the area’s fascinating history. Matera is world-famous thanks to its ancient cave dwellings, known as sassi, in which people have been living for some 9,000 years. It is believed the sassi are the oldest continuously inhabited caves in the world. While many citizens were forced to leave in the 1950s, being named a UNESCO World Heritage Site in 1993 gave the area a new lease of life, with boutique hotels and restaurants emerging as a result.

Of particular note is the Sextantio Le Grotte della Civita, which has converted ancient stone dwellings into 18 boutique bedrooms, all simply furnished and illuminated by candlelight. Each room has been conserved carefully, boasting both their original shape and materials. The hotel’s clever use of its cavernous walls and minimalist design hark back to the simplicity of ancient times. At this achingly romantic hotel, guests are transported back in time and confronted by nature’s permanence.

Scoring top marks for creativity is the recently unveiled InterContinental Shanghai Wonderland, a mammoth hotel set within a former quarry in China’s financial hub. Taking an incredible 10 years to construct, the enormous structure features a balcony for each of its 336 rooms, enabling guests to take in spectacular views of the surrounding cliffs and the waterfall that cascades from the top of the quarry to a pool at the bottom.

At 18 storeys high, this architectural masterpiece with its waveform design has just two floors above ground level, with the rest below and two that are underwater. These underwater levels include public areas, guest rooms, sport facilities, an aquarium and conference facilities for up to 1,000 people.

The hotel’s unconventional design makes ingenious use of an otherwise disused space. Upon its opening in November 2018, UNESCO representative Michael Croft described the InterContinental Shanghai Wonderland as a template for sustainable development “that has been inspired by a vision of a better future, and a present that looks to its past for answers”.

While landscape hotels such as the Mirrorcube choose to assimilate with the landscape on a small scale, the Amangiri takes a very different approach. Situated in a 600-acre plot in Canyon Point, Southern Utah, this expansive hotel manages to cleverly integrate itself into one of North America’s most dramatic desert landscapes, despite its size. Framed by dunes and mountain ridges, the hotel keeps in tune with the area’s raw aesthetic throughout. Its striking design and use of clean lines and natural materials invites the surrounding desert inside.

In addition to being spacious, every suite at the Amangiri features an outdoor lounge area with a fireplace, offering stunning views of thousands of miles of untouched scenery. Its four-bedroom offering, the Mesa Home, provides even greater seclusion and was designed to complement the untamed splendour of the Grand Circle region.

For guests keen to explore the stunning local scenery, the hotel has easy access to the many nearby national parks and Lake Powell. It also neighbours the biggest Native American reservation in the US, the sprawling Navajo. Offering options for hiking and climbing, the Amangiri ensures every guest can take advantage of being on nature’s doorstep.

When it comes to intermeshing with the landscape, the iconic image of the whitewashed houses of Santorini, peppered with sea-blue rooftops and vivid-pink bougainvillea, is renowned and beloved the world over. Instead of jutting out or digging in, buildings on the island follow the rippling pattern of the mountainside, organic in their placement and deeply evocative as a result.

Santorini’s ethos of integrating with the landscape is evident throughout the island, so it’s unsurprising that cave hotels have become particularly popular among tourists. One fine example is Aris Caves, a luxury hotel that offers eight exquisite suites – each unique and carefully crafted from the natural curves of the cliffside into
which they are built.

Rooms at Aris Caves are decorated simply with arching doorways and accents of soft blue, meaning they are perfectly in keeping with the traditional style of the island. Featuring views of Santorini’s famous caldera and volcano, together with the awesome sight of the Aegean Sea, the panorama is nothing short of magical.