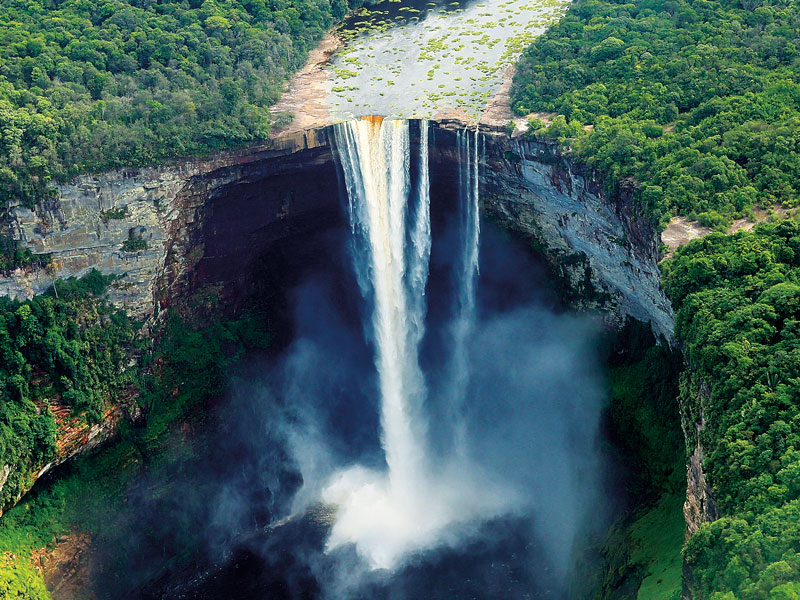 Guyana’s annual visitor numbers currently hover around the quarter of a million mark, but efforts are underway to drive greater footfall

Among the least well known of all the countries in South America, Guyana covers just 215,000sq km and has a population of little over 770,000. Its cultural ties mean the country is often considered part of the Caribbean, even though it is located on the continental mainland, bordered by Venezuela, Suriname and Brazil. Perhaps the only time the country could claim to have been in the international spotlight is one it would rather forget: the 1978 Jonestown massacre.

Despite its relative obscurity, Guyana has plenty to offer visitors. The country has certainly earned the right to call itself the ‘land of the giants’, boasting the world’s largest species of snake, spider and rodent. Kaieteur Falls, the planet’s tallest single-drop waterfall, is a must-see, as is the rest of the national park surrounding it.

Annual visitor numbers currently hover around the quarter of a million mark, but efforts are underway to drive greater footfall. In particular, Guyana is looking to target North America by launching new marketing campaigns and partnering with airlines in the US and Canada. If these proposals have the desired impact, then Guyana may not remain undiscovered for much longer.

On the rise
Guyana may not top many people’s list of places to visit, but its tourism industry is experiencing a robust period of growth. The sector expanded 18.3 percent year-on-year during the first six months of 2018, the fastest growth seen in the Caribbean region. Although it still has a long way to go before it is thought of as an alternative to South America’s most popular destinations, the country’s progress is commendable.

Brian Mullis, Director of the Guyana Tourism Authority (GTA), told Business Destinations that because Guyana doesn’t attract the same number of visitors as, say, Brazil or Argentina, it offers different pleasures to the intrepid few who make the journey there.

“Guyana’s tourism product boasts authentic nature, adventure and cultural experiences that are virtually unheard of today,” Mullis said. “It provides an opportunity to travel great distances without seeing another human – or any sign of one – the opportunity to have a national icon like Kaieteur Falls all to yourself and the chance to interact with indigenous people in their villages without an interpreter. Here, every traveller feels like a pioneer.”

Although last year’s figures may have been boosted somewhat by the Guyana Jubilee celebrations – visitor numbers were up 102 percent during the festivities – this cannot explain the longer-term upward trend witnessed in the country since 2013. Much of the credit for this should be given to local tourism organisations, which have launched a number of strategic marketing efforts in recent years.

Full-time representation in target markets and a robust digital strategy have both proven effective. As media interest in the country has grown, more travellers have become aware of Guyana’s many draws. This is providing benefits for local people and domestic businesses. Tourism is already worth eight percent of Guyana’s GDP, but this figure is sure to grow in the coming years.

Northern neighbours
In November 2018, American Airlines launched its first service to Guyana, flying passengers from Miami to Georgetown. As the inaugural flight landed, a small ceremony attended by officials from both the US and Guyana demonstrated the significance of the new route.

Convincing American Airlines to serve the Guyanese market is not the only approach tourism officials have taken to target North American visitors: last year, the GTA partnered with Emerging Destinations, a marketing agency specialising in the travel sector, and Green Team Global, a strategy and communications agency, to improve Guyana’s presence in Canada and the US. “The North American market [and] the UK are Guyana’s key source markets, and Germany and the Netherlands are priority investment markets,” explained Nicola Balram, Senior Officer of Marketing at the GTA. “Our focus as an agency has always been on our key markets. However, in 2018, Destination Guyana has taken a big step in strengthening that connection by appointing market representation in these places for the first time. This is beginning to yield better marketing outcomes through increased awareness of Destination Guyana and increased market demand for our unique product offering.”

One of the ways in which Guyana is boosting its appeal overseas is by focusing on the niche areas where it excels. With more than 900 different species of bird, for example, the country is a haven for birdwatchers. Its populations of jaguar, giant anteater, giant otter, black caiman, anaconda and arapaima, meanwhile, ensure it appeals to wildlife spotters in general. Sport fishing in the country’s Rewa and Rupununi rivers will also attract anglers looking for a more exotic catch.

While it may be small in size, Guyana has a distinct advantage over its neighbours: as the only state in South America to have English as its official language, visitors from the US and Canada need not worry about brushing up on their Spanish or Portuguese. This is also a unique selling point for the Guyanese tourism authorities when attending major consumer trade shows or launching new marketing materials.

Green agenda
Although tourism is more commonly thought of as having a damaging impact on an area’s environment, a sustainable ecotourism programme can form part of a broader strategy to protect the natural landscape. The GTA has been careful to ensure that its activities align with the government’s Green State Development Strategy.

“Poorly managed tourism contributes to environmental degradation,” Mullis said. “Conversely, well-managed tourism is renowned for its potential to contribute to conservation and the preservation of the natural heritage upon which it depends. This reality prompted the GTA’s vision, which is to be recognised locally and internationally as a premier destination for protecting its natural and cultural heritage, providing authentic experiences and maximising local economic benefits.”

Incorporating sustainable tourism best practices has been a priority for tourist enterprises in the small South American country for some time now; a fact that is demonstrated by a number of ecotourism initiatives. Kaieteur National Park, for example, was one of the first protected areas in all of South America, while the Guyana Marine Turtle Conservation Society has been managing the fragile ecosystem of the Shell Beach area for almost 30 years.

Of course, the GTA’s desire to increase visitor numbers – both from North America and elsewhere – will create added risk for the natural environment. The indigenous groups that call Guayana home, such as the Macushi, will also need added protection. Fortunately, the GTA is collaborating with the Ministry of Indigenous Peoples’ Affairs, as well as individual tribes, to ensure these communities are heard.

The GTA currently has a difficult job on its hands. Targeting too much growth too quickly risks making Guyana overly commercialised. After all, the country’s obscurity and undiscovered nature is one of its main selling points. Existing efforts to gradually open the country up to the North American market suggest tourism officials have sustainability in mind, even as they pursue greater growth. Hopefully, this approach will continue to be prioritised, ensuring the country’s rich biodiversity and stunning natural landmarks can be enjoyed by both locals and travellers for years to come.