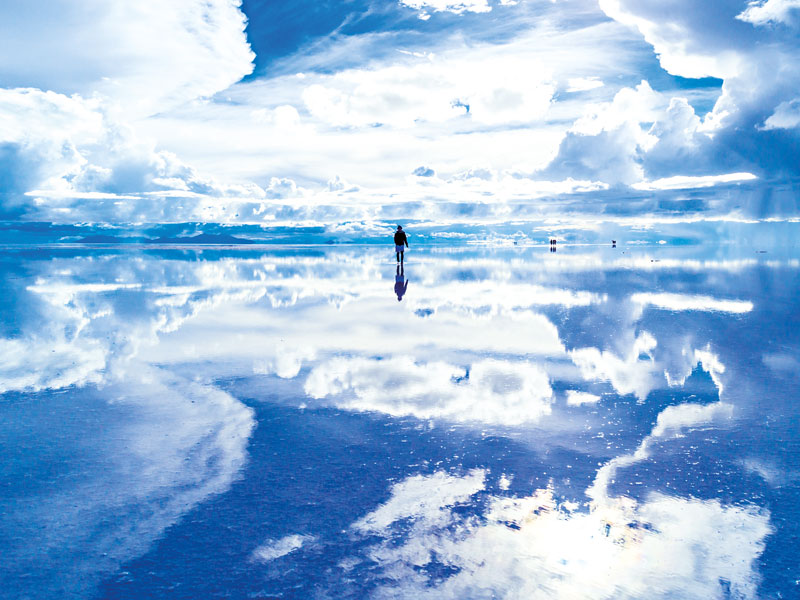 Stretching some 11,000sq km, Salar de Uyuni is the largest salt flat on the planet. During the wet season, a thin layer of water sits upon the ground’s surface and acts as a gigantic mirror

Photography as a hobby has never been as accessible as it is today. With seriously impressive cameras available at affordable prices, a wealth of knowledge online – from video tutorials to detailed user guides – as well as evening classes and photography clubs local to most city dwellers, it’s never been a better time to start snapping. This trend, in line with the growing ease of travel and a penchant for sharing pictures on social media, is fuelling the rise of photography tourism.

But many are no longer satisfied with a few cursory holiday pictures taken by the sea or the usual landmarks; they want to capture beauty and uniqueness, to create art. To do so, people are going off the beaten track to capture truly extraordinary images. Here, we take a look at some of the world’s most photogenic destinations.

Once a prehistoric lake that dried up around 40,000 years ago, today the bright white landscape features multiple salt mounds, hexagonal patterns created by salt rising from the ground, and numerous islands spotted with thousand-year-old cacti. Though barren, some creatures inhabit the space, including rare hummingbirds and vivid pink flamingos, further adding to the beauty of this otherworldly place.

For many, the wet season, which runs from November to March, is the best time to visit Salar de Uyuni. During these months, a thin layer of water sits upon the ground’s surface and acts as a gigantic mirror, reflecting the sky and creating optical illusions that are a delight for any photographer. Those unable to tear themselves away from this rare sight can stay at the Palacio de Sal, the world’s only hotel made entirely from salt.

Also known as the Rainbow Mountains of China, this geological wonder is a world-famous spot for artists and photographers alike. A rainbow of extraordinary colours paints the rolling mountaintops of the 322sq km Zhangye National Geopark, which is located in the city of Zhangye, Gansu.

The mountainous landscape is formed of sandstone and siltstone, deposited during the Cretaceous period. Sedimentary rocks that would otherwise remain hidden were exposed during a collision of the Indian and Eurasian tectonic plates around 55 million years ago. Centuries of weathering have further exposed underlying formations of differing composition, creating the palette of colours that can be seen today.

The area isn’t a hotspot for tourists just yet, so visitors don’t need to book their train tickets in advance. June, July, August and September are considered the best months of the year to see the rainbow mountains; the weather is comfortable, with moderate rainfall not only cooling the area, but also deepening the colours of this unique landscape.

Aptly named the Wave, this sandstone rock formation is a marvel of natural design. Located in the US state of Arizona, near its border with Utah, the area is an arcade of curving, twisting and meandering rock in vibrant reds, yellows, pinks and browns, which produce a hypnotic pattern.

Found on the Coyote Buttes slopes of the Paria Canyon-Vermilion Cliffs Wilderness, iron deposits are partly responsible for the unique display of colour, while water erosion during the Jurassic age first formed the Wave’s famous troughs. Erosion by wind over thousands of years has shaped the formation into the spectacular sight it is today.

Each year, tens of thousands of hopeful hikers apply for a permit to see the Wave, which is considered one of the best landscapes to photograph in the US. But with only 20 permits allocated each day through a lottery system, the Wave’s exclusivity has further added to its allure. The best time to shoot the Wave in all its glory is mid-morning to early afternoon, as this minimises the formation’s extensive shadows.

Iceland’s caves have become legendary the world over. Among the most beautiful to capture on camera is the Crystal Cave in Vatnajökull, Europe’s largest glacier. Inside, the sight is simply breathtaking: centuries-old ice is rippled with black volcanic ash, forming mesmeric patterns. Ice formations hang above visitors, adding to the magnificence of the unique space.

Unknown to many, new ice caves are formed in the Vatnajökull glacier during the summer months. As such, the formation and location of the Crystal Cave differ slightly every year, happily meaning that photographs will vary with each visit.

Despite the caves having little natural light, even novice photographers can capture striking images using their camera’s automatic settings, making it an ideal destination for beginners.

The caves can only be visited between November and March, and the number of people allowed in each day is limited, meaning tours sell out quickly. Weather conditions and flooding, meanwhile, can result in a last-minute change of plans, though there is still beauty to capture in Iceland’s other caves.

There are some sights on this planet that are so incredible they hardly seem real. This can certainly be said for Banff, a resort town located in Banff National Park, Alberta. The Rocky Mountains – Mount Rundle and Mount Cascade in particular – dominate its breathtaking skyline, which is lined with evergreen trees.

Lake Louise is the focal point of any picture of Banff; its vibrant turquoise waters are more expected on a Caribbean beach than in the middle of the Rockies.

Banff National Park spans 6,500sq km and is home to an abundance of flora and fauna, including black bears, elk and wolves. The pristine waters and wilderness of Banff allow a rare opportunity for travellers to feel truly connected to nature. While more tourists visit the park with each passing year, there are still secluded and postcard-worthy shots to be found at sunset and sunrise.

There are a few locations from which one can take in the wonder that is the northern lights: situated in the centre of the auroral oval, the Norwegian town of Tromsø is arguably the best.

The island city itself is incredibly picturesque; wooden houses dating back centuries sit surrounded by snowy peaks and crystal-clear water. The scene is a Scandinavian fairytale come to life, but at night the real magic begins.

Appearing in shards of emerald green and turquoise woven with vibrant purples and pinks, the aurora borealis – nature’s very own light show – is both surreal and magnificent. In Tromsø, photographers are gifted with an incredible backdrop in the dramatic fjords and the Lyngen Alps, made all the more enchanting when the area is bathed in autumnal colours after the period of the midnight sun.

Though January, February and March are best recommended for sighting the northern lights, there is something to be said for capturing the extraordinary skies of Tromsø in autumn, a season that also promises high chances of seeing the aurora borealis.