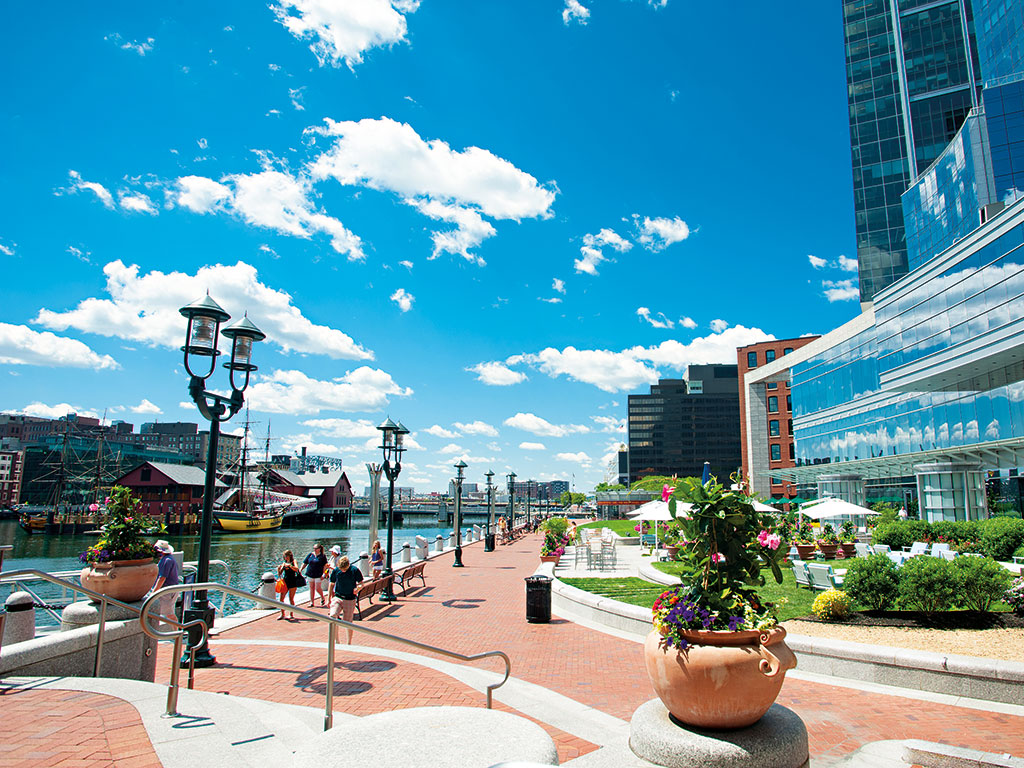 A public walkway along Boston Atlantic Wharf. The city - one of the US' oldest - offers a mix of colonial charm and urban sophistication

From the downtown core to the outlying neighbourhoods, Boston is a city of intriguing diversity. With a mix of colonial charm and urban sophistication, the city offers great dining and nightlife, extraordinary shopping, championship professional and college sports teams, and a vibrant arts and cultural community. The city’s dynamism has seen it named as the Best Destination for MICE, North America in the 2016 Business Destinations Travel Awards.

A world centre for education, technology and life sciences, known also as the ‘Athens of America’, Boston and Cambridge’s medical and educational institutions have helped to make Boston an international location of learning . The metropolitan area’s 35 hospitals and more than 60 colleges and universities are a vast resource for meetings, while groups that meet in Boston and Cambridge also have access to world-renowned financial and biotech institutions located in the Greater Boston area.

Development and attractions
Boston and Cambridge boast a variety of hotel products to suit the needs of any traveller – from five-star boutique and independently owned properties to all of the major domestic and international brands. There’s something for everyone.

There are more than 40 new hotel projects planned in Greater Boston, with potential for more than 5,000 new hotel rooms to be added to the city’s inventory over the next four years. These hotels are a mixture of full service hotels, boutique properties and extended-stay facilities.

There are so many different things to do in Boston, it can be hard to know where to start. To begin, you could walk the Freedom Trail, which is made up of 16 historically significant sites linked together along a unique 2.5 mile urban walking trail, marked with a brick or painted red line. Many travellers also visit Fenway Park, the home of the Red Sox, which is known as ‘America’s most beloved ballpark’ and is nestled in the city of Boston. During your visit to the ballpark, you could sit atop the world famous Green Monster, which stands 37ft high overlooking leftfield, grab a ticket to a game, take a public tour, or just walk around the outside while exploring the city.

The Boston Public Library is definitely worth exploring. Established in 1848, it was the first large free municipal library in the US. The library holds several first edition folios by Shakespeare, original music scores ranging from Mozart to Prokofiev’s Peter and the Wolf, and the personal library of President John Adams.

The Boston Common and Public Garden together represent the starting point of the Freedom Trail. Boston Common is the oldest park in the country and is almost 50 acres in size, and the Public Garden was the first public botanical garden in America. There are many rich and unusual plants to admire, as well as the lagoon, monuments, fountains and the swan boats floating peacefully by on the middle pond.

A wealth of history
Built in 1742, Faneuil Hall was home to merchants, fishermen and meat produce sellers. Today, customers enjoy unique, locally loved and nationally recognised shops, while indulging in the worldwide cuisine at numerous restaurants.

Nearby, the Rose Kennedy Greenway is a mile and a half of contemporary parks in the heart of Boston, connecting people and the city with beauty and fun. The Greenway has a number of offerings for visitors, including seven water features to cool off in, many renowned food trucks and carts with a variety of distinctive, affordable food options, as well as one of the largest free public Wi-Fi networks in the Commonwealth.

Continuing your adventure, the Boston Harbour Islands is a National Park comprised of 34 stunning islands, eight of which are accessible to the public via ferryboat. However, if the sea isn’t your thing then Assembly Row – Boston’s newest premiere-brand outlet – is a dining and entertainment village located just seven minutes by subway from downtown Boston.

The Boston area is home to two of the most prestigious universities in the country – Harvard and the Massachusetts Institute of Technology (MIT) – while neighbouring Cambridge is worth a trip across the Charles River. With its stunning architecture and incredible diversity of restaurants and shopping attractions, Cambridge attracts a mix of students, locals and sightseers. The area is also home to many museums, including the Harvard Art Museums, Peabody Museum of Archaeology and Ethnology, and the MIT Museum, to name but a few.

Getting out and about
Boston and neighbouring Cambridge provide upscale, international and eclectic options for the taste buds, and each unique neighbourhood is home to a whole different dining scene. New restaurants join the mix on a regular basis, keeping things fresh and cutting-edge. In addition to Boston’s great dining scene, the city has a mobile option in the form of food trucks. The food truck phenomenon has grown substantially over the past few years, providing many styles of food.

For more food and drink, the Boston Public Market opened in 2015. The attraction features pushcart vendors and a new indoor, year-round 28,000sq ft public market, with 45 permanent vendors and an additional exterior market, which can accommodate up to 20 further vendors on the plaza outside. The Kitchen at Boston Public Market is a 3,200sq ft space offering chef demonstrations, cooking classes and year-round programming that showcases regionally sourced food.

To help facilitate the increase in passenger traffic – estimated to reach six million international passengers by 2022 – the Massachusetts Port Authority (Massport) will be expanding the international terminal at Logan Airport. Construction has already begun, to create and reconfigure 130,000sq ft in the international terminal to accommodate the Airbus 380, which will be flown by Emirates, Lufthansa and British Airways. Starting in 2018, Massport will begin work on an expansion of the terminal, including new gates, an expanded customs area and a covered pedestrian walkway to the Airport MBTA subway station.

Logan International Airport is just three miles from the city, and visitors can easily access Boston by subway, taxi, bus or water taxi. Once in Boston, travellers find the city has excellent access to air, rail, and bus connections. Known as ‘America’s walking city’, Boston’s two convention centres feature the fastest airport-to-convention transfers in the country. However, when you can’t get around by foot, the city is easily accessible by the T, Boston’s public transportation system. What’s more, planners and delegates find that Boston is a very safe city to move around in.

Boston and Cambridge are remarkable cities with much for visitors to enjoy. From seafood and shopping to museums and festivals, or from coffee shops to taking a stroll through the historic Harvard Yard, Boston and Cambridge offer a unique experience for any traveller.