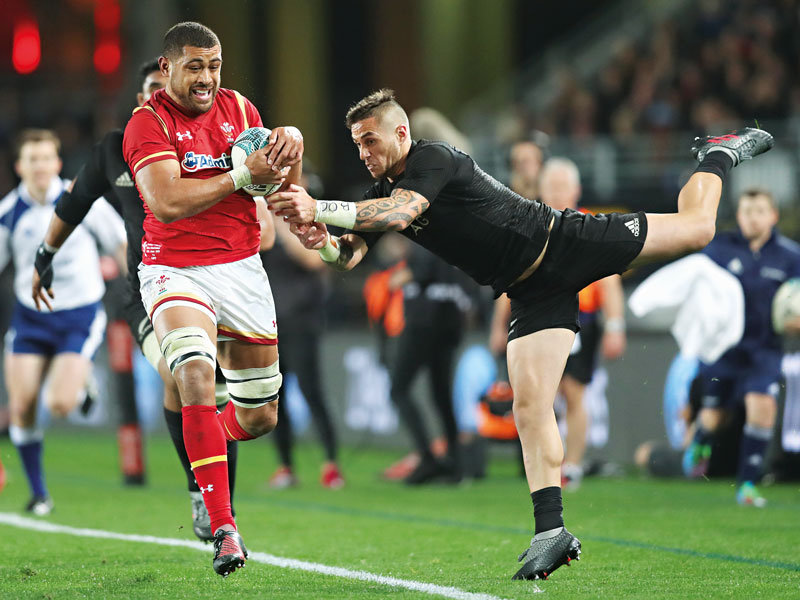 In the opening match of the 1991 Rugby World Cup, Samoa, or Western Samoa as the team was then known, made sporting history. The 16-13 win over Wales, who were semi-finalists at the 1987 tournament, was achieved through a mixture of thrilling ball skills and ruthless physicality.

It was the first time a non-seeded team had beaten a seeded one at the World Cup, and set the Pacific Islanders up for their run to the quarterfinals. After the game, Wales coach Alan Davies was magnanimous in defeat. “That was some of the hardest tackling that I have seen,” he said.

In the years that followed, there have been other high points for Samoa, including a memorable victory over Australia in 2011, but there have also been many lows. Last November was perhaps the team’s nadir, but it didn’t occur on the pitch. It took place in the office of Samoan Prime Minister Tuilaepa Sailele Malielegaoi, who is also the chairman of the Samoa Rugby Union (SRU).

“We are bankrupt,” Malielegaoi told the Samoa Observer. “In other words, we are insolvent. It means the union cannot continue to pay off our debts with the banks. We also need money to pay the players so they can continue to play.”

If the admission was a low point for the Pacific Islanders, it was also a dark day for rugby worldwide: 2017 revenue for the Rugby Football Union (RFU) was recorded at £184m ($255m). The Welsh Rugby Union turned over £74.9m ($103.9m) in the same year. While the game’s high-profile nations generate huge sums of money, Samoa and its island neighbours Fiji and Tonga have not been invited to the party.

An uneven playing field
Samoa’s population and relative isolation from rugby’s superstar nations – even New Zealand is more than 3,000km away – means that the country is used to punching above its weight.

For a long time, prodigious natural talent allowed Samoa to give a good account of itself against many richer nations, but rugby’s move towards professionalism has created a game of haves and have-nots. Dan Leo, former Samoan lock and founder of the Pacific Rugby Players Welfare Group, believes that professionalism has not benefitted all teams equally.

“I think the key thing is that since rugby went professional in 1995, the gap has widened,” Leo explains. “Before 1995, teams like Samoa were very competitive, but in the last couple of years it’s reached the point where it’s difficult to put out a competitive side against a team like England. And the scorelines reflect that.”

As rugby teams at both club and international level became professional, they also became businesses. Post-1995, profit quickly overtook inclusivity, with Pacific Island teams usually left looking on from the sidelines. One of professionalism’s earliest snubs came with the formation of SANZAAR’s Super 12 rugby tournament.

Even though the winner of the Pacific Tri-Nations had previously been invited to the competition’s predecessor, the Super 10, they would receive no such offer for the Rupert Murdoch-owned Super 12.

Overseas advantage
When Melani Matavao stepped onto the Twickenham pitch in the 73rd minute of Samoa’s test match against England in November 2017, it marked the high point of a promising career. The 22-year-old scrum half stood opposite the likes of George Ford, Maro Itoje and Chris Robshaw. Through talent and hard work he had earned the right to share the pitch with these rugby superstars as a sporting equal. But off the pitch, things were different.

Revenue for the Rugby Football Union in 2017

The amount the Welsh Rugby Union turned over in 2017

While England’s players earn hundreds of thousands of pounds a year playing for their clubs, in addition to sponsorship deals and international match fees, the financial reality in Samoa is starkly different. Matavao, as the only Samoan player still playing the game domestically, currently earns just $16 a week.

It is an extreme example, and perhaps a short-lived one if Matavao earns himself a transfer to a club overseas, but one that highlights the financial inequality that is threatening the future of the game in places like Samoa, Fiji and Tonga.

If Matavao does make the journey abroad, he will be treading a well-worn path. The list of players from the Pacific Islands reaping the rewards of playing in wealthy European leagues is a long one, and it’s difficult to criticise players for seeking a pay cheque that could support both themselves and their families at home.

Once plying their trade abroad, however, the opportunity to play internationally for one of the tier one nations provides an even larger financial incentive. With residency rules currently set at three years (due to become five in 2020), players from the Pacific Islands do not have to wait long before they are eligible to represent a wealthier nation.

In the November 2017 internationals, England players received a match fee of £22,000 ($30,500), while the Samoans were paid just £650 ($900). Given this earnings gulf, it’s hardly surprising that Nathan Hughes, born in Fiji, chose to play for England, or that Tongan-born Taulupe Faletau plays for Wales. John Nauright, co-editor of The Rugby World in the Professional Era, believes that the financial disparity is having a negative impact on the game’s overall competitiveness.

“The level of skill and quality of overall play suggests that the national teams of the three main Pacific Island unions could be more successful if funding systems assisted with better talent retention,” Nauright said. “However, with the launch of Major League Rugby in the [US] scheduled for April 2018, there will be another outlet for island players.”

Against this backdrop of financial inequality, there were 23 players with Pacific Island heritage playing for tier one nations during that international period. Although this provides individuals with financial rewards that could not be achieved by representing a Pacific Island team, it traps countries like Samoa, Fiji and Tonga into a vicious cycle. With their best players plying their trade for other nations, it becomes difficult to attract crowds, sponsors and, ultimately, revenue.

Tackling the issue
Following the SRU’s admission of bankruptcy, the RFU agreed to give Samoa £75,000 ($104,000) as a goodwill gesture, matching the payment made to Fiji the previous year. The donation will ease some of the financial pressure for now, but handouts such as these do little for the long-term future of the game on the island.

Leo believes that moving to a more even revenue sharing model is the only sustainable approach to solving the Pacific Islands’ financial troubles. Currently, home teams keep the entirety of match-day revenues and are only obligated to cover the visiting teams’ costs. As such, the RFU made more than £5m ($6.9m) from last year’s test match with Samoa – the SRU is simply asking for a share of the money that they helped bring in.

“There’s no way that we can make money as a country from the Pacific Islands,” Leo said. “The only money being made in the sport is in the big games, like Samoa versus England at Twickenham, so we need to be able to negotiate a share, even if it’s just five or 10 percent, of what’s being generated in those away games.”

There’s also an acceptance that some left-field thinking may be required to prevent rugby’s continued decline in the Pacific Islands. According to Nauright, the creation of training bases in New Zealand and Australia, with costs shared across rugby nations, would help improve the development of players from Samoa, Fiji and Tonga.

For Leo, perhaps Samoa needs to start playing some of its home games elsewhere. If every other match the team played at Twickenham was classed as a Samoan home fixture, allowing the team to keep the revenue generated, it would make a huge difference to the SRU’s income. “It will cost the bigger unions some money in the short term,” Leo admitted, “but it will strengthen the game and be repaid in the long term.”

The SRU also has to do more to dispel accusations of corruption and financial mismanagement. As well as disputing its bankruptcy claim, World Rugby has been quick to reiterate its support for the game in the Pacific Islands, citing the record £1.5m ($2.1m) it provided to Samoa in direct and indirect funding in 2017.

Although the sum doesn’t seem so impressive when you consider that it has to support the sevens team, as well as the 15s, funding is unlikely to increase while there remains a feeling, rightly or wrongly, that the SRU is more interested in lining bureaucrats’ pockets than supporting its players.

If Samoans feel like the recent media attention surrounding their financial situation will ultimately come to nought, it’s easy to sympathise with them. The current voting system on the World Rugby Council makes it difficult to see much progress occurring in the near future.

At the moment, the 10 tier one countries have three votes each, while the entire continent of Oceania has just two. Samoa, Fiji or Tonga could propose an equal revenue sharing model, but it will not be adopted without the support of the richer nations.

When the Samoan players walked off the pitch following their victory over Wales in the 1991 Rugby World Cup it seemed as though they would go on to compete at the very top of the sport. Here was a team that had controversially been omitted from the previous tournament defeating one of the sport’s most famous nations.

But instead of serving as a catalyst for further success, no Pacific Island team has since got further than the quarterfinals. Unless rugby starts looking after its smaller nations, the likes of Samoa, Fiji and Tonga might not have a team to compete at future tournaments at all.