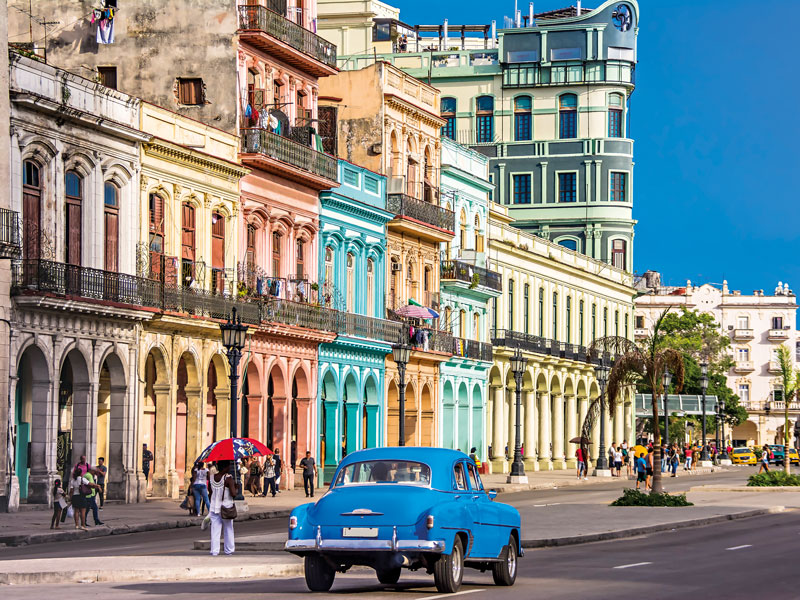 Take a stroll around Havana, Cuba’s capital, today and you could be forgiven for thinking that you’ve travelled back to 1950s America

When then-President Barack Obama announced the gradual re-establishment of US–Cuba relations in December 2014, it was heralded as a historic breakthrough in the two countries’ icy affiliation. Dubbed the ‘Cuban thaw’, the agreement relaxed a number of trade and travel restrictions on US citizens travelling to or investing in Cuba.

The thaw had an immediate effect on tourism in the small island nation: between January and May 2015, the number of Americans visiting Cuba for leisure was 36 percent higher than figures for the previous year. Dr Stephen Wilkinson, an expert on US–Cuba relations and a lecturer in politics and international relations at the University of Buckingham, noted that, at the time, “the number of American visitors became the largest of any national group to the island”.

This progress, however, was short-lived. In November 2017, at the end of his first year in office, President Trump announced an abrogation of Obama’s normalisation policy, calling it “terrible and misguided”. Trade and tourism restrictions were once again tightened to prevent individual US citizens from travelling to Cuba, while restrictions were also placed on US firms seeking to invest on the island.

Trump’s policy has divided opinion, with some arguing that it is a petulant, politically motivated protest against Obama that deepens the restrictions placed on Cuba’s already struggling economy. Others, however, have suggested that it could be a blessing in disguise, as it allows the island nation to retain the vibrant culture for which it is so well known.

Step back in time
Take a stroll around Havana, Cuba’s capital, today and you could be forgiven for thinking that you’ve travelled back to 1950s America. The streets are lined with vintage cars, the Art Nouveau buildings constructed in the 1930s have lost none of their picturesque charm, and the cabaret dancers of the city’s famous Tropicana club still put on an exuberant show
six nights a week.

Many were concerned that the Cuban thaw would destroy some of the island’s retro appeal, with more than 50 years of American capitalist culture suddenly imposed in a flurry of McDonald’s restaurants and Coca-Cola adverts. The World Travel and Tourism Council wrote in 2016: “Images of Cuba evoke nostalgia for a bygone era. Crumbling architecture and classic cars combine with lively Afro-Cuban music and miles of white-sand beaches. Talk to a traveller after their Cuba trip, and their mantra often centres on one key refrain: ‘Go, now. Go before it changes.’”

After all, Obama’s shift in foreign policy did not just give US citizens the right to travel there – it also opened the door for businesses to move in and take advantage of the growing tourism opportunities on the island. For example, in March 2016, the hotel chain Starwood became the first US company to sign a deal with Cuba since the 1959 revolution by agreeing to manage two hotels in Havana that had previously been under the control of the Cuban Government.

Wilkinson, however, believes these concerns were overstated. “Cubans are Americanised already to some degree – they still drive around lovingly in their 1950s American cars, they play American music, they watch American films, they play and follow American sports.”

Regardless of the legitimacy of these apprehensions, they never came to fruition due to Trump’s rescindment of bilateral relations in November 2017, which closed the doors to Cuba for American businesses and tourists. While it may not have been Trump’s intention, the policy had the effect of safeguarding Cuba from further American influence, allowing its unique national identity to endure.

There’s huge touristic value in Cuba’s reputation as an untainted destination, predominantly in its total opposition to other increasingly homogenised locations across the globe. Many modern cities are filled with a familiar handful of big brands, leaving little space for local independent traders.

Win-win situation
Cuba’s isolation from the rest of the world may have a clear cultural benefit, but the economic picture is far less rosy. The US embargo has hugely restricted the Cuban economy since its application in 1959 – Wilkinson told Business Destinations that “it amounts to something like 10 to 15 percent of GDP per year, or $260bn since 1959, according to the Cuban estimate”.

Unable to trade with the US, Cuba has turned to nearby countries such as Venezuela for subsidies, which currently account for around 20 percent of its GDP. In recent years, however, Venezuela’s economy has been plagued by hyperinflation and oil price fluctuations, leaving Cuba with an unstable primary benefactor.

Without the embargo, “Cuba would fly economically, there’s no doubt about that”, according to Wilkinson. The country has a highly educated population, with more graduates per capita than any other nation in the Western Hemisphere, said Wilkinson, along with a world-class healthcare system and biotechnology sector. It also benefits from a range of valuable raw materials, including oil reserves in the Gulf of Mexico and strategic minerals such as nickel and cobalt.

By lifting the restrictions, the US could take advantage of all of the factors that make Cuba a prosperous trading partner, as well as a lucrative destination for American businesses to set up shop. At the moment, the US is cut off from those possibilities.

Realising its potential
Of course, Cuba itself would see huge benefits if the embargo was lifted, as it would be able to seek investment from US sources to boost its national infrastructure. “It’s a developing country, it suffers from capital shortage, and it needs capital investment,” said Wilkinson. Under the embargo, it’s illegal for Cuba to use US dollars, which not only cuts it off from US investors but also from lending institutions like the IMF and the World Bank due to the US’ powerful influence on those bodies.

As such, Cuba is forced to turn to private banks to borrow money for development projects – but, according to Wilkinson, “private banks are so scared of the embargo that they won’t lend [to Cuba], or if they will, they want to charge very high rates of interest, so it means that Cuba can’t afford to borrow the money”. Occasionally, the island will turn to other governments such as China or Vietnam, but the stars don’t always align with regards to the availability of funds or a willingness to lend.

While there are certain political complications surrounding the relaxation of the embargo, there’s no doubt that the re-opening of relations would economically transform Cuba and would be a boon for US business, too. It would also allow Cuba to realise its potential by reinforcing key sectors such as agriculture while building an economy that better serves both
citizens and visitors.

As for Cuba’s iconic cultural identity, maintaining that is certainly possible in the face of an influx of American business. However, for better or for worse, under the current US administration’s obstructive foreign policy, no such US–Cuba relationship seems likely to develop any time soon.