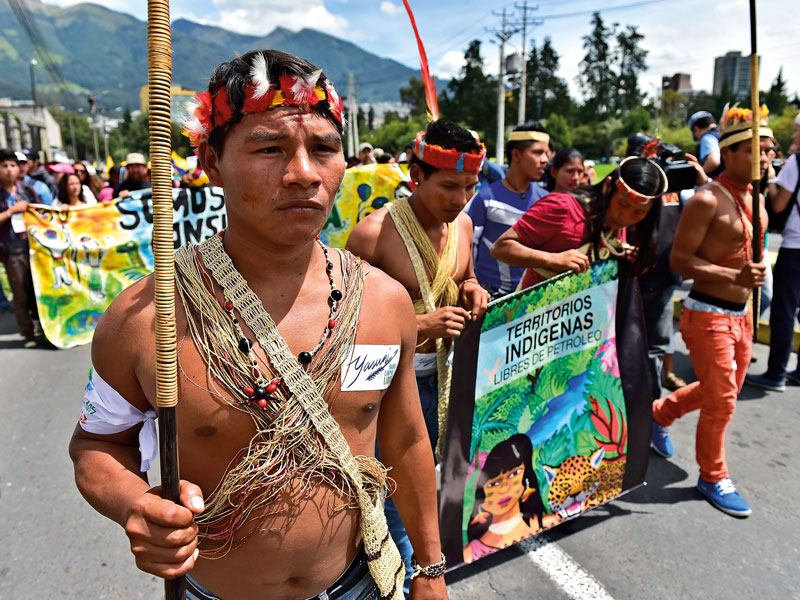 In 2014, Huaorani natives marched through Quito in an effort to ban oil drilling in Yasuni National Park

Developing countries are often faced with a dilemma that more advanced nations never had to contend with. Without mature service sectors to propel their economies forward, they are left with little choice but to exploit their natural resources in order to improve the lives of their citizens. However, they must also do so at a time of heightened awareness of environmental issues.

In Ecuador, this conundrum has become more pronounced over the past year. Just like Colombia and Peru, the country has significant mineral deposits – notably copper, iron ore, gold and silver. Unlike its Andean neighbours, however, the mining industry in Ecuador remains underdeveloped.

Although this partly stems from geographical factors – the locations of some mineral deposits present logistical and financial difficulties – government policy has also played a key role. In 2008, a new mining mandate passed by the Ecuadoran Constituent Assembly removed or diminished many of the incentives for foreign firms to invest in the country’s mining sector. By 2012, Ecuador was receiving less foreign direct investment (FDI) per person than any other South American nation.

If the Ecuadoran Government wishes to avoid further conflict with indigenous people, it must be more prudent when expanding the mining industry into new areas

Mining may threaten Ecuador’s natural beauty, but it has the potential to improve the economic fortunes of a country where more than 20 percent of the population lives in poverty. The difficult task facing the Ecuadoran Government, therefore, is developing its mining sector sustainably, while also balancing the interests of foreign companies, environmental groups and indigenous communities.

Making ground
Although Ecuador has some catching up to do before its mining industry can rival those of other South American nations, recent progress has been impressive. Since 2013, the government has been actively trying to restore the country’s reputation among mineral investors.

2021. The Ecuadoran Government awarded 300 mining concessions to private companies in December 2017, up from 237 in September. Overseas conglomerates are obviously eager to take advantage of Ecuador’s more open policies, but local people will benefit too: the decision to open 33 mining sites in the province of Azuay is expected to create 1,800 new jobs.

One of the international firms poised to gain from Ecuador’s mining boom is Lumina Gold. Last year, the Vancouver-based firm responded to the government’s reforms by announcing it would ramp up exploration at its Cangrejos gold-copper project. In particular, regulatory changes made it economically viable for Lumina to begin drilling on the west side of the Cangrejos mine, the Gran Bestia satellite deposit and the Orquideas area.

“This represents a crucial first step in demonstrating the value of the Cangrejos project to both Lumina shareholders and Ecuador,” explained Marshall Koval, President and CEO of Lumina Gold. “The preliminary economic assessment establishes that Cangrejos is one of the top 15 [underdeveloped] gold projects in the world based on its average annual production potential. Our team is confident that with further drilling, engineering and study, we will continue to increase the scale of the project and improve its economics.”

Many other mining projects in Ecuador are also being driven by FDI. SolGold, an Australian company, is looking to further develop its Cascabel copper-gold deposit in the north-west of the country, while two Chinese firms – Junefield Mineral Resources and the CRCC-Tongguan consortium – are also active. This is only the beginning: by 2021, the Ecuadoran Government expects to receive $4bn in mining investment.

Digging a hole
Many of Ecuador’s new mining developments are currently at the exploration stage, and it will be a number of years before the government and local people reap the full rewards of the deals being struck. The time it takes for mining projects to get underway also provides an opportunity for certain groups to challenge their legitimacy.

Indigenous people in particular have long held deep concerns about the damage mining activities have on their communities and the natural resources they rely on for survival. Last year, they were given hope that Ecuador’s economic development would not be allowed to come at the expense of their own rights.

On October 22, 2018, Ecuador’s provincial court ruled that the government’s decision to award mining concessions close to the Aguarico River violated the indigenous Cofán people of Sinangoe’s rights to water, food and a healthy environment. The decision nullified 52 concessions and prevents future development across more than 32,000 hectares of rainforest.

“This is a great victory for our community, for our people and for all indigenous peoples,” said Sinangoe President Mario Criollo. “We are not just fighting for our people, but for everyone who depends on clean water and clean air. This victory is a huge step forward for our children and for future generations. We will remain vigilant in our territory and will continue fighting until we have legal title over our entire ancestral homeland.”

The victory is part of a growing number of legal battles facing the industry. Last November, another setback arose after regional political administrators from the Cotacachi Canton brought a landmark court case against the Ecuadoran Government. They argued that by failing to consult the local people or authorities before giving over large swathes of the Intag Valley for mining concessions, the government was in violation of the national constitution. Earlier in 2018, a similar case emerged in the Sucumbíos province.

According to Sam Leung, Vice President of Corporate Development at exploration firm Adventus Zinc, “community relations” is one of the biggest risks facing mining investment in Ecuador. If the government wishes to avoid further conflict with indigenous people – and the possibility of more defeats – it must be more prudent when expanding the industry into new areas.

Showing mettle
The Yasuni Biosphere Reserve and National Park covers 9,820sq km, stretching across the eastern foothills of the Andes mountain range. It is one of the most biodiverse regions in the world, home to a multitude of mammals, reptiles and birds, and perhaps as many as 100 different species of tree per acre of land.

The tranquillity offered by such a location, as well as the opportunity to interact with indigenous people, is one of the main draws for visitors, but both are under threat as a result of Ecuador’s resource extraction policy. Underneath the national park lies as many as 1.67 billion barrels of oil.

In 2013, an initiative looking to raise $3.6bn in order to leave the oil reserves untouched failed, with the international community unable to raise even 10 percent of the target figure. As a result, exploration is now underway, and criticism from local groups and environmentalists may not be enough to rein it in. In 2018, Victoria Tauli-Corpuz, a UN expert on indigenous people’s rights, declared that Ecuador’s current development plans made indigenous communities “invisible”.

Instead of damaging this unique natural habitat with oil drilling, Ecuador could instead ramp up its ecotourism efforts to boost government revenues. In other parts of the country where mining projects are being explored, the thoughts of all stakeholders must be considered before drilling begins.

Ecuador’s economic development should not come at the cost of the country’s environment or culture. If politicians will not listen to petitions or protests, then perhaps the courts will make them take notice. Going up against the national government and multibillion-dollar companies is daunting, and the people of Ecuador may not always win, but recent victories suggest it is a battle worth fighting.