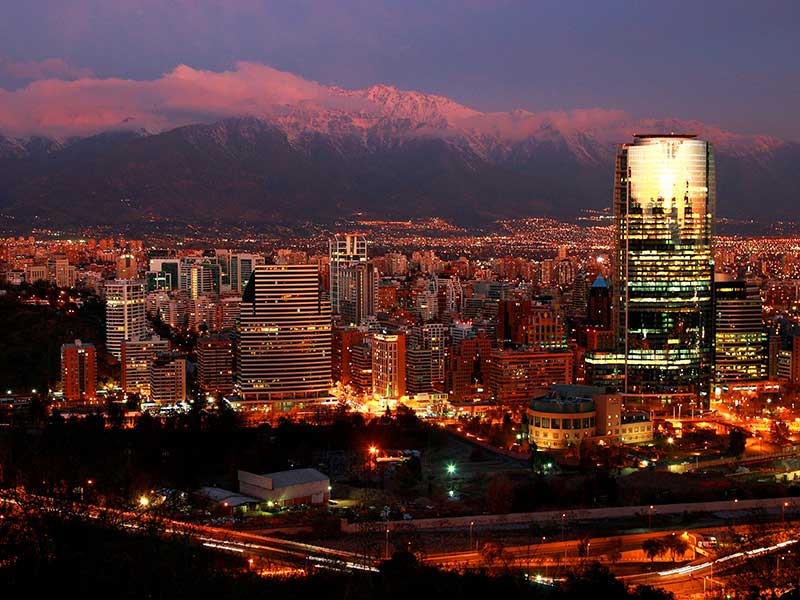 After becoming Chile’s leading tourist destination in 2016, the international media has fallen in love with Santiago. The Chilean capital has captured the spotlight thanks to its beautiful landscapes, broad range of tourist-friendly activities and fantastic business centres. In fact, in 2016, Santiago even ranked above such regional icons as Buenos Aires and Rio de Janeiro.

But this is no coincidence: Chile has built a reputation for its stable and relaxing atmosphere, and has been recognised by the National Brand Index and Global Peace Index for the security and quality of life on offer throughout the country.

Undoubtedly, this perception complements Chile’s inherent geographic and cultural diversity, as well as its standing as a dependable business community. These factors – and many more – have helped tilt the scales in Santiago’s favour, capturing the attention of chroniclers and journalists the world over.

International acclaim
Santiago’s growing reputation as a prime destination for both tourism and business has been well documented. For example, the influential Spanish newspaper El Pais remarked the local cuisine “showcases the strength of the culinary movement in Chile”, while The Guardian highlighted the capital’s “vibrant nightlife scene [is] steadily erasing [Santiago’s] reputation… as a stopover city.”

The New York Times, meanwhile, dubbed Santiago as the best place to visit in 2011 and has recently published a list of must-see hotspots, praising the city’s “dynamic cultural landscape… world class chefs, design-forward shops and energy”.

Providing a fantastic mixture of traditional and modern dishes, Chile is home to some of the best restaurants in the world

It is no surprise Santiago’s cuisine is hot topic among visitors. Drawing on a wonderful combination of local ingredients and providing a fantastic mixture of traditional and modern dishes, Chile is home to some of the best restaurants in the world. This was emphasised when the renowned industry publication Restaurant named the capital’s favourite eatery, Boragó, on its list of the world’s 50 best restaurants for the third year running.

Further to its cuisine, Santiago benefits from a fantastic location: boasting a close proximity to the Andes, some of the country’s best wine-growing regions and the Pacific coast – where Nobel Laureate Pablo Neruda wrote several of his most famous poems.

Built for business
Behind Santiago’s rising reputation as a jewel within South America lies the long-standing collaboration between the public and private sector, most notably the partnership between Imagen de Chile and the Santiago Convention Bureau (SCB). This collaboration has sought to build on the nation’s reputation as a tourist destination and showcase the city as a hub for conference and business ventures. In fact, in 2015, one in every six visitors came to Chile on business, producing revenues in excess of $617m.

In particular, SCB has focused on creating new opportunities to generate revenue for key industry players and has promoted Santiago as a host city for a variety of international conferences, events and meetings. These events have catered to a range of industries, including institutional, medical, scientific and technological clients.

As a result, Santiago ranked second on América Economía’s list of Best Cities for Doing Business in 2015. The city has also been recognised by other independent publications, with particular success in regard to meetings, incentives, conferences and events (MICE). For example, the International Congress and Convention Association (ICCA) ranked Santiago in the top 40 of 900 host cities. This success has come in light of recent contributions to the national economy and the country’s standing as one of the most stable destinations in Latin America.

In order to keep up with the flow of visitors and meet their growing expectations, Santiago is investing significantly in its infrastructure and installed capacity. Santiago’s international airport is being upgraded to handle the 30 million visitors forecast for 2020, while two additional tube lines are set to open in the next two years. Once opened, the lines will connect a total of 136 stations spanning 140km, and will accommodate a projected 2.7 million travellers per day. Hotel capacity – currently slated at 15,000 beds – is also expected to grow quickly, while stringent quality guidelines have also been introduced.

This improving infrastructure, coupled with The Economist’s assertion Santiago is Latin America’s safest city, has made Santiago one of the best cities in the region for business-related gatherings. In fact, Corporación de Turismo de Santiago, a group that operates across both the public and private sectors, is planning a series of MICE-related projects in order to take advantage of this growing market.

Sustaining progress
Despite the city’s growing success, we know better than to rest on our laurels. This is why we have always kept sustainability at the forefront of our operations. Far from being merely cosmetic, our focus on sustainability is deeply rooted as a means of differentiating Chile’s offering, and is leveraged as an innovative tool to encourage the industry to adopt the best practices. This has helped ensure there is a healthy balance between economic activity, environmental responsibility and social progress.

Evidence of this commitment can be seen in the National Sustainability Roundtable discussions, which are now in their third edition. Led by the undersecretary of tourism, the group analysed the S Seal, a commendation awarded to establishments within the tourism industry that have made substantive strides in sustainability or environmental policy. Work is also underway to establish a set of primary targets for the International Year of Sustainable Tourism for Development 2017.

We are convinced the only way to effectively grapple with the challenges that stem from a rising number of visitors and a growing demand for world class events is to increase the cooperation between the public and private sectors. We also understand that providing an attractive and inviting experience is vital to ensuring not only positive reviews but return visits as well.

This year we will be showcasing our capabilities at FIEXPO Latin America 2017, highlighting the fantastic MICE attractions Santiago has to offer event organisers from around the world. Visitors, hosted buyers and representatives of influential travel organisations, such as Nina Freysen Pretorius, Chair of ICCA, will all be in attendance, searching for the locations that provide the best management and tourism prospects.

City’s will also be judged on their respective governments’ commitment to hosting such activities, and the willingness to develop infrastructure in order to accommodate a growth in demand. We firmly believe Santiago provides the ideal venue for both MICE and tourism on a broader scale. This is why we are committed to making Santiago South America’s home for business.