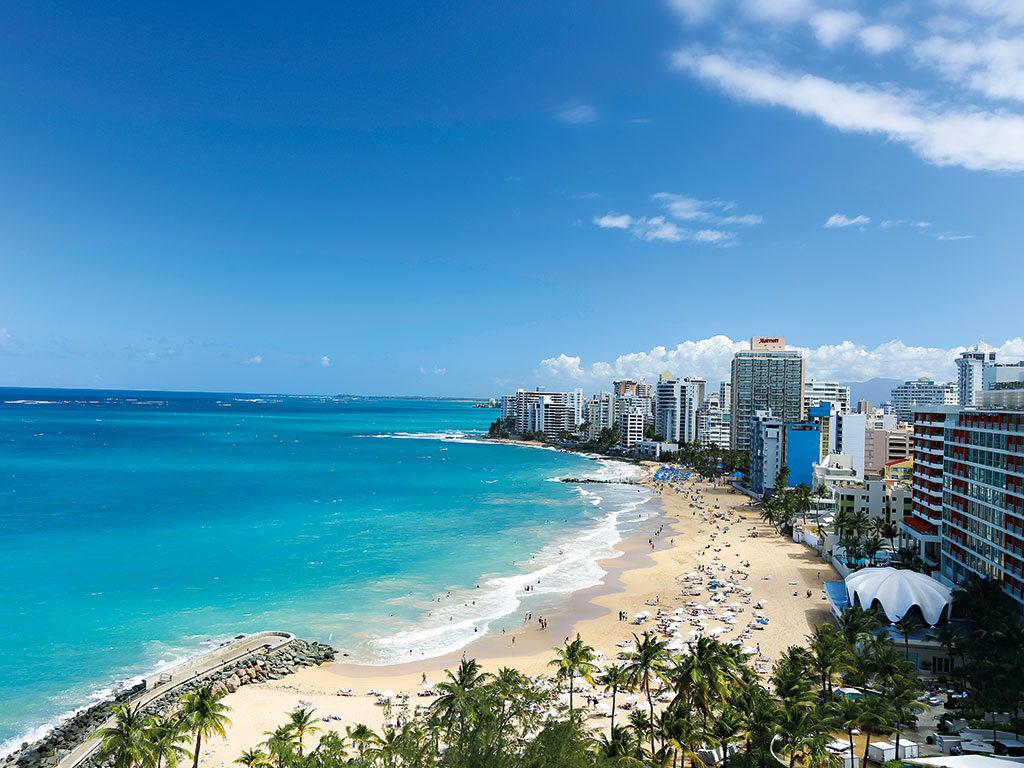 Kayaking races on three of the world’s five bioluminescent bays; experiencing the highest and longest zip line in the world, certified by the Guinness Book of Records; hiking in a tropical rainforest – these are just some of the incredible ‘only in Puerto Rico’ experiences that meeting planners can include in a Puerto Rican meeting or convention itinerary. In addition to being the home of the Caribbean’s largest and most technically advanced conference centre, Puerto Rico’s variety of offerings successfully meets the needs of event planners and attendees alike.

A trend that continues to evolve within the island’s MICE sector is the need to experience the stunning destination beyond the meeting room: the experiences groups can take away from Puerto Rico are central to the success of any event. Puerto Rico offers many first-time activities or once-in-a-lifetime experiences that allow delegates to go outside and explore the island’s natural beauty, including hiking in El Yunque (the only tropical rainforest in the United States Forest System), kayaking at La Parguera in Lajas (one of the world’s five remaining luminescent bays), exploring the Camuy River Cave Park (home to one of the longest underground river systems in the world) or visiting the Arecibo Observatory (home to the world’s largest radio/radar telescope).

Meeting among history
Boasting over 500 years of history and culture, Old San Juan – a registered UNESCO World Heritage site and the historic colonial settlement within the capital, San Juan – is the oldest city in Puerto Rico. There is no other Caribbean island with a greater number of art galleries, museums or festivals dedicated to local artists and their crafts: art and music play a major role in everyday life on the island, and today Puerto Rico is internationally known for its cultural influence, including its artists and their footprint in various genres.

Puerto Rico’s yearly calendar is teeming with mesmerising cultural events, such as the Fiestas de la Calle San Sebastián in January, which marks the end of the holiday season, and the Puerto Rico Heineken Jazz Fest, which brings together Latin jazz stars from all over the world. Furthermore, Puerto Rico’s top-quality gastronomy is deeply intertwined with the island’s culture: the unique flavours that have been passed from generation to generation – beginning with the Taíno Indians and later influenced by the Spanish, while adding the tastes imported by African slaves – have melded together to create a full gourmet experience that has delighted visitors for decades. Puerto Rico is also the birthplace of the world-famous piña colada cocktail.

Exemplary venue
Redeﬁning Puerto Rico’s tourism landscape and MICE sector is the Puerto Rico Convention Centre Pedro Rosselló (PRCC). With a design that is suggestive of a wave in motion and colours that reflect the vibrant natural palette of the Caribbean, the 55,742sq m centre is the largest facility of its kind in Puerto Rico. Offering the latest technology in the region and accommodating groups of 10 to 10,000 people in true world-class style, PRCC’s expansive indoor and outdoor function spaces can be customised for any event.

PRCC features a 14,186sq m exhibition hall that is divisible into three individual exposition spaces, as well as a 3,670sq m Grand Ballroom; the largest in the Caribbean. PRCC also offers an additional 3,382sq m of private meeting space, including 15 separate function rooms spread across two levels, which can be divided into 28 breakout rooms.

In terms of green initiatives, the facility is powered by an array of solar energy initiatives that collectively create one of the largest eco-friendly projects on the island. PRCC has been fitted with 5mW of photovoltaics, comprising 17,764 panels over car parking areas and 2,139 panels on the building’s main roof. These panels generate around 8,000mWh of electricity annually: as a result, this solar initiative was named the Best Electrical and Environmental Project of the Year by the Puerto Rico Engineers and Surveyors Association in May 2014, making it a truly one-of-a-kind convention centre.

Conceived as a way to expand the island’s successful tourism industry by encouraging more planners to organise meetings or citywide congresses at the centre, the focus has now moved towards development within the wider Puerto Rico Convention Centre District: composed of beautiful promenades and walkways and complete with fountains and views of the San Juan Harbour and the Atlantic Ocean, the Puerto Rico Convention Centre District already boasts three hotels from the Sheraton and Hyatt brands. Approximately 8,000 guestrooms are located within eight miles of the PRCC, including those located within the vibrant Condado and Isla Verde tourist zones.

Accessing the conference centre couldn’t be easier: Puerto Rico’s airport, the Luis Muñoz Marin International Airport, which has recently undergone a $750m renovation and will be embarking on an additional $200m enhancement programme over the coming years, is located only 11 minutes away from the PRCC. Puerto Rico continues to serve as the Caribbean region’s leader in air travel, with over 2,000 weekly non-stop and direct flights from the US, Canada, Latin America, Europe and connecting flights to and from the rest of the Caribbean.

Raising the bar
Meet Puerto Rico, the island’s official convention bureau, is committed to ensuring your meeting experience escapes the conventional. The professional and proactive team guides planners in creating top-notch meetings, arranging every detail from beginning to end and delivering an event that makes a lasting impression.

With more than 54 years of experience as the official convention bureau of Puerto Rico, Meet Puerto Rico can also assist you with contacting more than 300 member-suppliers – from hotels and transportation providers to audio-visual and translation services. Moreover, the destination support services team can assist with coordinating site inspections. From the moment you arrive to the moment you leave, the Meet Puerto Rico team will ensure you have a productive visit by providing input on how to create increased attendance campaigns – including social media options where applicable – and providing contacts for coordinating special events, such as themed parties and cultural activities at unique venues within the city.

In addition, the Meet Puerto Rico sales team will help collect hotel proposals and assist with site selection, matching each group to the ideal accommodation and meeting facilities, within the appropriate budget. It will also assist with every step of the bidding process during the host selection. The benefits of working with the bureau are endless, but planners should rest assured that, from start to finish, there will be a one-stop-shop team working with you and for you. Best of all, Meet Puerto Rico’s services are always free of charge, which doesn’t hurt your bottom line.

Within the MICE sector, Puerto Rico continues to garner a number of industry and consumer awards, including Successful Meetings’ Pinnacle Award, Smart Meetings’ 2014 Platinum Choice Award, and being named as one of Sports Events magazine’s places to watch in 2015. Furthermore, Priceline.com named Puerto Rico as a top international destination for 2015.

“Puerto Rico continues to add top-quality products to accommodate large citywide conventions, as well as new luxury properties to address that growing market”, Milton Segarra, President and CEO of Meet Puerto Rico, told Business Destinations. “Adding new properties, services and amenities that are of great benefit to meeting and convention groups, in addition to our new and more frequent airlift and expansion of the convention centre district, demonstrates our strength and vitality within the tourism and convention sector.”