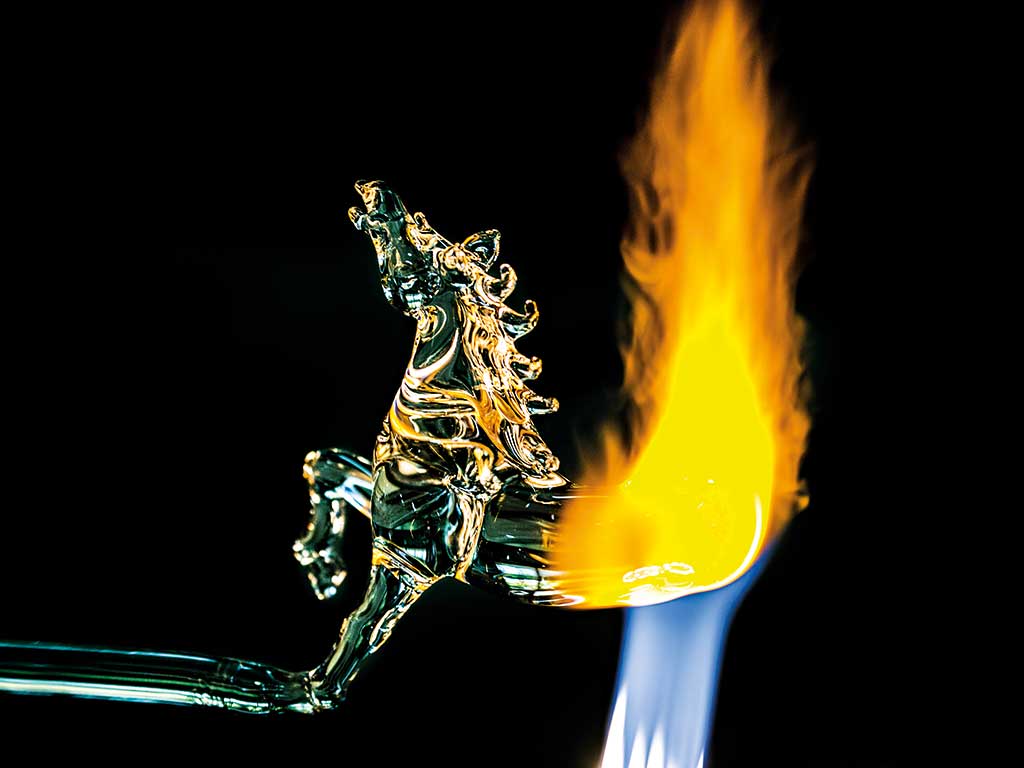 Historically, Morano has been host to the finest examples of glass artistry in the world

A short vaporetto trip from Venice is all that is necessary to reach the smaller islands that make up the greater area of the city. Taking one of the small boats past the imposing Isola di San Michele – the city’s cemetery – reveals the comparatively unassuming island of Murano.

It’s a journey worth making, as the island is host to the finest examples of glass artistry in the world. Since its earliest beginnings, the island has shown the pinnacle of what can be achieved through the art of glassmaking.

Recently though, the destination has fallen on more challenging times. With the island’s population of glassmakers falling amid an ongoing battle with imitation products, Murano is fighting to keep its heritage intact. However, there are efforts underway to rejuvenate the craft and bring makers together amid a wider effort to preserve the island, its art and its future.

Fire hazard
The tradition of Venetian glassmaking dates back at least 800 years. While the earliest found examples of glass produced in Venice date back to the mid-15th century, a glassblowers’ guild was known to have existed as early as 1224. In 1291, Venice’s glassmakers were confined to the island of Murano due to fears that their kilns had the potential to reduce the city to ash.

With the island’s population of glassmakers falling amid an ongoing battle with imitation products, Murano is fighting to keep its heritage

This move also made protecting the secrets of the master glassblowers far easier. With all glassmakers confined to the island, the Venetian Government could retain the substantial financial value the craft brought to the region and stop its secrets from spilling out. If caught trying to move away from Venice, punishments for the glass masters included death.

At this point in history, Venice was an economic superpower and a global leader in technology. The glassmakers were no exception, and were afforded a high social status. During the 15th century, Murano’s glassmakers focused on perfecting ‘cristallo’ glass: discovered by Angelo Barovier, it was the first glass in the world to be clear and free of discolorations – a major achievement in the industry. In the 16th century, glassmakers were adding dyes to produce pieces of remarkable colour, and between the 16th and 17th centuries, Venetian glass was highly desired by Europe’s elite.

However, over time, Murano struggled to keep control of its secrets. Despite the threat of death, glassmakers did leave the island and took their craft and trade secrets abroad. While Murano’s glassmakers often revived old styles that had been forgotten in attempts to generate new interest, Murano glass’s rarity began to fade from the 18th century onwards. Combined with the decline of Venice as a global power and the ultimate end of the Venetian Republic, the region’s significance gradually fell.

Modern artefacts
Even today, glass remains an incredibly important asset to both Venice and Murano, with the glassmakers operating on the island still attracting tourists with demonstrations of their skill and the stunning variety of pieces that are available to buy. One of the most popular demonstrations is the sculpting of a prancing horse: in a seemingly impossibly small number of moves, a skilled artisan can craft such a horse in less than 90 seconds. The speed is born out of necessity, however; glassmakers have to work fast while the material is hot and malleable.

Speaking to Business Destinations, Luciano Gambaro, President of Consorzio Promovetro, said the entire Murano community is still involved in the traditional glass manufacturing process through a variety of factories and institutions: “In Murano there is also one of the most important glass museums in the world, one of the few schools of glass of Italy, and… an internationally known institution in the Stazione Sperimentale del Vetro [experimental glass station], where chemical and physical research is done on glass for customers from all over the world. People of the island say that it is glass that runs through their veins, not blood.”

Consorzio Promovetro was founded in 1985 as a consortium tasked with the protection and promotion of Murano glass. Its members include Confartigianato Venezia, Confindustria Venezia and around 50 glassmakers on the island. The organisation exists to promote Murano glass through exhibitions, meetings and appearances at national and international trade fairs. The group even owns a transportable kiln so they can take glassmaking demonstrations on the road. However, more recently, its role has included protecting the wider industry as well.

The sincerest form of flattery
In 2001, Consorzio Promovetro was entrusted with the national and international promotion of the Vetro Artistico Murano trademark. Originally created in 1994, Vetro Artistico Murano acts as a proof of origin to people buying glass products from the island, in person or online. It’s a necessary precaution, since cheap knock-offs have flooded both the international market and local shop fronts.

According to Gambaro: “Fake products and imitations sold as if they were from Murano have a strong impact on the island economy. We calculate that about 60 to 70 percent of the products sold in Venice and Murano are not original.”

Wandering the streets of Murano, it is easy to see the effect of counterfeit products on the island. Many stores, particularly the smaller ones, have handwritten signs warning that fake products are killing the island. Some of these shops have a glassmaker in residence, crafting tiny sculptures using tweezers and a small flame for curious onlookers. While some of the more famous designers may rely on their reputation and high prices to remain viable, the smaller retailers are clearly feeling the worst of the pinch.

This is what led to the creation of the Vetro Artistico Murano trademark. Its use is regulated by law, and it is the only legally recognised trademark that will tell a buyer whether a piece of glass is genuine. Gambaro explained: “The use of this trademark is permitted only to the glass companies that produce their glass objects within the area of the island of Murano, and it is strictly managed by rules and inspections.”

The trademark includes a sticker seal that features a number of security measures designed to ensure it can’t be faked. Use of this trademark is not compulsory for all glassmakers on Murano, but it does, however, offer substantially more protection as well as proof of authenticity to the makers who do choose to use it.

Struggling under the weight
The future of Murano is still in significant doubt, in no small part due to challenging economic conditions in Italy and a decline in the number of glassmakers on the island. Gambaro commented: “In recent years, Murano has been suffering one of the strongest [crises] that it [has] ever had.”

In a report published by Bloomberg in 2014, the Filctem-Cgil union said the number of people employed in Murano’s glass factories had fallen from 2,000 to 400 since the year 2000.

However, despite the significant impact of Italy’s recession, there are now some signs of optimism. Gambaro said: “The economic crisis of the last [few] years strongly struck Murano. The number of glassmakers has indeed fallen down, as has the number of glass companies. But also brand new companies have been born and new collaborations are developing in… New markets have been discovered, and new products have been created.”

Murano’s challenges are also inseparable from those facing Venice more broadly. Tourism is the biggest driver of the city’s economy, but its relationship with the industry has been under increasing stress. As reported in the UK’s Daily Telegraph, in 2016 UNESCO threatened to place the city on its list of endangered heritage sites if Italy did not ban large cruise ships from visiting the lagoon.

At present, the ratio of tourists to residents in Venice is well out of proportion. The number of tourists, which stands at more than 25 million per year, has put incredible pressure on the city’s 50,000-odd residents by pushing up rent and swallowing any industry that is not directly related to hospitality. In its criticism, UNESCO also cited a “lack of architectural and town planning coherence” as having resulted in irreversible changes to the city’s delicate ecosystem. Locals staged large protests against the cruise ships in both 2013 and 2016.

However, Mayor of Venice Luigi Brugnaro has voiced his support for continuing to allow cruise ship traffic. He told The Daily Telegraph: “I believe this is the time to make international decisions, thinking of Venetians above all. Venetians don’t want to die, but want to make the city grow with their pride and talent.”

Considering how dependent Venice is on tourists, completely banning cruise ships would cause substantial short-term damage. However, UNESCO is yet to add Venice to its list of endangered sites.

An optimistic future
Murano’s history has been filled with challenges in the past, and Gambaro said the island’s glassblowers would survive into the future: “One of the greatest strengths of Murano is that it has always been able to change, not only according to the people’s tastes, but also foreseeing new trends and styles. Murano has always been able to modify itself according to the market’s needs, and this time we’ll be able to do it again.”

What will never change is the beauty of the products that are made on the island. Shop windows are full of stunningly colourful and intricate items, with many tourists still arriving to browse the displays. And while online retail may have made it possible to purchase genuine Murano glass without making a trip to Italy, nothing can replace the spectacle of seeing, in person, a prancing horse emerge from a fiery glass orb.