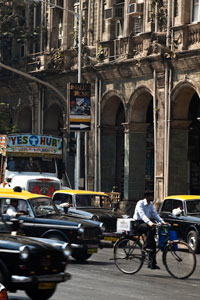 When Slumdog Millionaire became a surprise international hit, one of criticisms from the Indian elite were that it portrayed Mumbai in a bad light; yet while much of the film remains fantasy the depiction of transition from dilapidated favella to high-rise metropolis does have a great ring of truth. Because though the world’s second largest metropolis may be booming and boast a skyline to rival anything Manhattan can produce, the pace of change has been largely uneven. There are more millionaires here than anywhere else in India but half the city still live below the poverty line.

Which only serves to make it more fascinating. Like any Indian city, the crazy chaos of carts, cattle and colours that flood its streets takes some getting used to. Yet Mumbai has a rare ability to combine sights of indescribable grace and beauty with experiences of such poignancy as to reduce a grown man to tears, living long in the memory and even longer in the soul.

Where to stay
The Taj Mahal Palace & Tower may have a somewhat dated feel, but that shouldn’t detract from he luxurious comfort and top quality facilities it provides. Taj Lands End redefines the term ‘service’ with a complete commitment to customer satisfaction and a fantastic evening buffet.

Where to eat
Everybody knows about Indian curries but the seafood dishes are just as delicious; dining at Trishna is enough to prove this. Gaylord is a Mumbai institution that has long been popular with the Bollywood crowd and still serves some mean local cuisine.

What to see
The rock-cut caves on Elephant Island, a short trip out of Mumbai harbour, are designated a World Heritage Site. Victoria Terminus is more like a cathedral than a railway station; it’s also had an important role in Mumbai’s unparalleled growth.