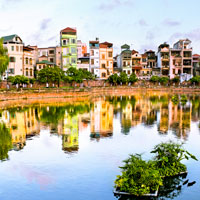 Few cities in Asia combine such a heady concoction of influences old and new as Hanoi, an enigmatic and strangely romantic city that charms you with its cultivated chaos and unexpected moments of clarity. Stilted pagodas and 11th century totems sit comfortably in the shadow of French colonial buildings and modern high-rise towers; diminutive locals haul rice and water in traditional shoulder baskets beside dilapidated rails, stepping aside for first-class steam trains carrying be-suited businessmen on modern mobile phones.

The intense and tangled Old Quarter may not have changed in a millennium and continues to resist the winds of change as economic reforms transform the people’s lives; industry estimates predict this to be the fastest growing city in the world between 2008 and 2025. It’s easy to lose yourself amid the hubbub, but there are few things more serene that then the sight of old men in early morning prayer by the misty shores of Lake Hoan Kiem.

Where to stay
The Hanoi Elegance Boutique has been so successful with its combination of modern fittings and traditional local charm that there are three others to choose from – imaginatively named Hanoi Elegance 2, 3 and 4 . For five-star service with all the trimmings, the Sofitel Metropole is housed in a beautiful and historic building.

Where to eat
Quan An Ngon serves more than just a meal but a full culinary experience, allowing you to wander through assorted mini-kitchens and eyeball your meal before choosing.

What to see
Watch a performance of the traditional Roi Nuoc (Water Puppetry) at Thang Long Water Puppet Theatre. The Hanoi Old Quarter is a beautifully preserved 13th century old town that still buzzes with life. Take a walk around the tranquil Hoan Kiem Lake at the heart of the city.