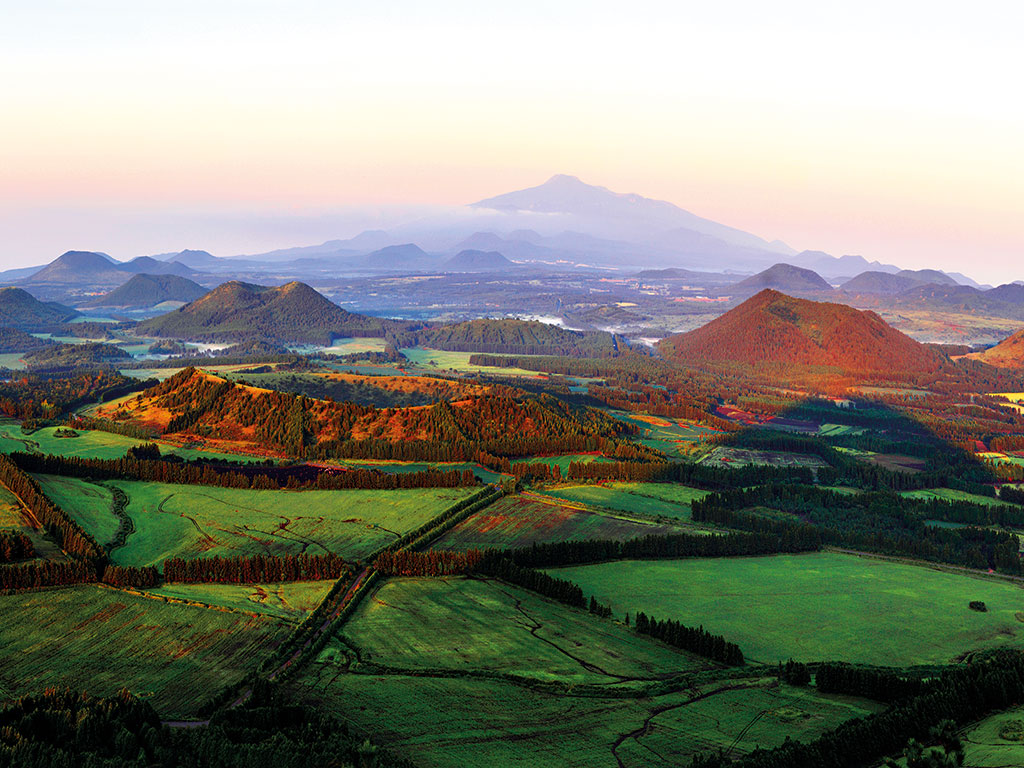 Oreum, one of Jeju's small volcanic mountains, with Hallasan Mountain - the tallest mountain in South Korea - in the distance

Jeju Convention and Visitors Bureau (Jeju CVB) was founded in March 2005 with the aim to attract key MICE events to the island while simultaneously promoting and strengthening the local economy through tourism. It is a non-profit organisation comprising 141 MICE Alliance members, including accommodation providers, a conference facility, tourist attractions, destination management companies, professional congress organisers, and multiple others. Last year, Jeju CVB was awarded the Best MICE Alliance award from the Korea Tourism Organisation as a result of its joint marketing with local MICE businesses. Furthermore, this year it has been named Best Destination for MICE, Asia in the Business Destinations Travel Awards.

Jeju CVB has been working to boost Jeju’s reputation as a top-class MICE destination for the last decade. During this time, the organisation has attained impressive know-how within the industry, offering excellent support programmes, one-stop information services and marketing activities. As a result of its passionate efforts, Jeju CVB now hosts over 200 domestic and international events every year, including a series of world-class ones.

The island occupies a strategic location at the heart of East Asia, between the hubs of South Korea, Japan
and China

Prepared for any event
The island boasts a selection of key attractions that make it a truly unique MICE destination in the Korean peninsula: since 2002, Jeju has been a free international city, allowing visitors from over 187 global destinations, including China, to enter the province without a visa and with the benefit of attractive tax privileges. The island also occupies a strategic location at the heart of East Asia, between the hubs of South Korea, Japan and China. There are now direct flights to Jeju International Airport from 29 international and 12 national cities.

As the largest island off the coast of South Korea, Jeju offers world-class meeting venues – as would be expected of such an international tourist destination. Hotels and conference centres to suit a variety of budgets and requirements can be found all across the island, offering services to suit both large and small events. State-of-the-art facilities amid unbeatable natural surroundings are also on offer, competing with those in high-profile cities the world over.

Events in Jeju can be of any size, from small, one-day conferences for local businesses, to week-long international conventions that attract world-renowned academics and professionals. Whatever the occasion, events are sure to incorporate Jeju’s greatest attractions, including its top hotels, beauty spots and museums. As the island’s hotels often come equipped with world-class conference facilities, you don’t have to leave the hotel grounds to get all you need from your business trip. But when you do decide to leave, guided tours are available to escort you to key sites and back again.

It is this unique combination of business and leisure that really makes Jeju stand out: with a range of UNESCO World Heritage sites on offer, including Seongsan Ilchulbong (Sunrise Peak) and Geomun Oreum (the island’s volcanic mountains), and a selection of stunning beaches and marine sports available along the amazing coastline, Jeju has a great deal to offer the international business traveller.

The island is not merely a recreational spot, but also a legacy to be observed and cared for by mankind: possessing rare geological features such as lava caves, dynamic volcanic topography and natural ecology, Jeju exudes a sense of mystery that contributes to it being known as one of the New7Wonders of Nature, as well as a UNESCO Biosphere Reserve and Global Geopark.

Hub of attractions
Jeju CVB measures the success of its efforts through the satisfaction of its customers. Annually, the Korea Tourism Organisation publishes its Korean Convention Competitiveness Report, which includes a satisfaction survey of MICE participants and hosts. In the most recent survey, Jeju achieved a score of 4.63 out of five in overall satisfaction, with this year’s results set to look just as bright. The recent opening of several new hotels has contributed enormously to customer satisfaction: last year, Jeju Booyoung Hotel and Resort opened, offering 449 rooms, its own 1,000-seat conference hall and several break rooms just metres away from International Convention Centre Jeju (ICC). The Ramada hotel brand has also opened several new sites on the island.

Jeju CVB also offers several unique services that cater to business travellers, including MICE event booths, where guests can receive general information about Jeju and its tourist attractions, and more hands-on experiences, such as trying traditional Jeju cuisine and costume. Furthermore, the Jeju MICE card was launched last year: this card is designated for MICE visitors during their stay on the island, allowing them to use public transport at a discounted price whenever they visit associated stores, restaurants or tourism sites.

One of the island’s main strengths is its incentive tours: these are usually held in famous tourist attractions, such as the ‘A Day Away Awesome Jeju’ tour along the Olle walking trail. This trail – with ‘olle’ meaning ‘narrow path from home to broaden road’ in the Jeju language – goes around the entire island, allowing travellers to experience hidden locations and share regional dishes with locals and trail experts.

With regards to these incentives, there has been a keen focus on the Chinese market in recent years, although Jeju CVB is now refocusing its efforts on the south-east Asian and Japanese markets. In the future, the bureau is expecting to see growth in the conventions industry by holding more national and international conferences. The biggest area for growth, however, will be the exhibitions sector: the island is currently underperforming in this area, but there is overwhelming potential for future growth. The International Electric Vehicle Expo took place in Jeju in March, while the island recently secured KRW 3.6bn to invest in local contact exhibition ecosystem support, showing the demand is indeed there for exhibitions space on the island.

Rising to the challenge
By distributing booklets with key information about the island’s public tourist attractions, bus services, business partner discounts and KRW 5,000 MICE transportation card, visitors are encouraged to see and feel more of Jeju than they might by simply attending a MICE event and moving between their hotel and conference centre.

As Jeju’s status as a MICE destination continues to rise, so do the challenges it faces: while Jeju’s key attraction is that it is an island, this does mean MICE delegates need to fly in order to visit, and Jeju CVB is eager to encourage major infrastructure development. With tourism on the rise, Jeju International Airport urgently needs expanding in order to allow for more flights for MICE participants.

Second on the list of recent challenges faced by Jeju CVB is the need for an expansion of convention facilities. Recently, the bureau has been unable to host some large-scale events due to the limited size of ICC, which does not allow two events to be held simultaneously. As a result, Jeju can lose out to other MICE destinations that offer more extensive exhibition facilities.

Lastly, the island sometimes encounters unexpected challenges, such as the MERS virus. However, Jeju CVB continues to cope very well: having gained experience from over 10 years of promoting and hosting MICE events, plus benefitting from MICE Alliance members-related business from both Jeju and Seoul, Jeju CVB is able to use mutual cooperation with its alliances to overcome these challenges.

As one of Asia’s most exceptional MICE locations, the island was able to launch Jeju MICE Expo last year, the first MICE expo in Korea to be organised and implemented by a local bureau. The event was tremendously successful, with local MICE companies and Jeju CVB partners enjoying face-to-face meetings and networking with national and international buyers. In the future, Jeju MICE Expo is expected to take place at the end of every year.