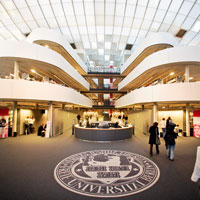 While in Berlin on business, spare time between meetings shouldn’t be hard to kill. Rife with architectural works of high calibre, both modern and historical, the city lends itself perfectly to endless city wanderings that allow the explorer to discover buildings that are often as interesting on the inside as they are on the outside. So important is Berlin as a centre for architecture that architects of global recognition fall over themselves to make a mark in the city. Some, such as the prolific Lord Norman Foster, have even established offices in this most historic of cities.

Altes Museum (old museum)
The Altes Museum was completed in 1830 and conceived with the purpose to house the art collection of the Prussian Royal family. Designed by the prominent German architect Karl Friedrich Schinkel in neoclassical style, the museum’s main feature is the set of towering columns to the front of the building. Another characteristic of the museum is the plinth that the museum rests upon – an elevating structure put in place to give the building a more imposing air, as well as to save it – and the art works within – from the flooding troubles that used to plague the area in the 19th century. Altes Museum was the first art establishment to land on the Museumsinsel (Museum island). Today, the site houses five critically acclaimed museums, an additional example being the Alte National Galerie that was designed in the latter quarter of the 19th century by August Struler.
Altes Museum, Am Lustgarten 1, 10178 Berlin

Reichstag
Originally launched in 1894, the Reichstag has been subject to severe damage over the years; the destruction it suffered during the Allied bombing of Berlin in World War II was particularly significant. The mighty building was left standing in its battered and beaten state until the 1960s, when it was established anew as a conference centre. Morphing into its current guise in 1992 courtesy of Foster and Partners, who were commissioned to revamp the building in preparation for its new life as the home of the unified German Parliament. With a focus on conveying a sense of transparency, both literally and metaphorically speaking, the giant glass dome perching on top of the building is now as much of an attraction as the original structure beneath it. The roof terrace and dome is accessible to the public and present the visitor with 360-degree views of central Berlin. Time slots are set and need to be booked in advance.
Reichstag, 1 Platz der Republik, 10111 Berlin

Neue Nationalgalerie (new national gallery)
Launched in 1968 and designed by the groundbreaking architect, Mies Van Der Rohe, the Neue Nationalgalerie (the new national gallery) is almost exclusively constructed using steel and glass. Resembling something of an angular spaceship, the low-rise edifice is designed according to the principles of early modernist structural abstraction, and consists of two levels only, ground floor and lower ground floor. Housed within this landmark piece of architecture is a notable collection of modern art by artists hailing from Europe and America. The carefully curated showcase extends to the courtyard, where sculptures by Alexander Calder, Henry Moore, Joannis Avramidis and George Rickey are to be admired.
Neue Nationalgalerie, Potsdamer Strasse 50, 10785 Berlin

Philological Library, “Berlin Brain”
The Philological Library, or as it’s called in popular tongue, The Berlin Brain, is another building in the German capital masterminded by the almighty Lord Norman Foster. More than a tad gimmicky and extra alluring for it, the library has been constructed to resemble a human brain, both internally and externally. Aside from the eye-catching interior, which is signified by a curvaceous silhouette mimicking that of the all-important human organ, the project also pushes sustainable values wherever possible. To mention only one green solution forming part of the concept, the building’s dome shaped shell features a double layer structure with a concrete core, along with solar- driven convection currents- particulars that have been put in place to adjust the temperature without the use of electricity.
Philological Library, Habelschwerdter Allee 45, 14195 Berlin

Brandenburger Tor (The Brandenburg Gate)
Arguably the most recognisable and potent landmark of Berlin-as it symbolises the reunification of the east and the west sides of the city – the Brandenburg Gate was commissioned by the Prussian King Friedrich Wilhelm II. Conceived by Karl Gotthard Langhans in 1793, the design of the gate draws on the gateway to the Acropolis in Athens and thus features a set of Doric columns on either side of the dramatic arch. The famous and highly dramatic Romanesque statue, the Quadriga, rests on top of the structure. It wouldn’t be too far from the truth to deem this landmark the most photographed site in Berlin, or even Germany.