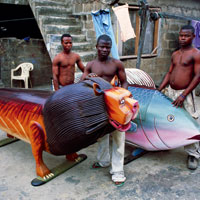 To deem Ghana the epicentre of arts and crafts of Western Africa wouldn’t be too far off the mark. International art collectors and casual travellers alike descend to the country in great numbers to get their hands on pieces of traditional artefacts – be it intricately carved figures in ebony wood, colourful Kente cloths or a wardrobe’s worth of indigenous costumes. There’s no doubt that the allure of the art scene helps to boost the country’s tourism industry, and thus spur its economy.

Although steeped in tradition and deeply rooted in set principles, the arts and crafts movement is far from stagnant, and today the segment is adapting quite flexibly to meet the specific demands of the international market. Prolific to say the least, the enthusiasm with which the native craftsmen create art, traditional variants and novelties alike, is remarkable and their inventiveness and creativity knows no boundaries.

Ashanti art reigns supreme
The arts and crafts culture of Ghana is established across the entire country and practised by several ethnic groups. Reigning supreme, however, are the Ashanti people of the Akan ethnic group that resides in central Ghana. An area rich in gold, the Ashanti (also called, Asante) kingdom traditionally produced art and crafts to flaunt their wealth and status. Encompassing many different types of arts and crafts, the most famous is undoubtedly the Kente cloth. Often referred to as the crowning glory of African weaving, the Kente cloth is made by the Ashantis as well as other Akan subgroups. In terms of design specifics, the style is signified by geometric patterns in an uninhibited mix of colours.

Construction-wise, the cloth is intricately hand woven and assembled using individual strips of cotton or silk fabric. Traditionally, the Kente cloth was used only at very special occasions and worn primarily by kings. Over time, the use of the sumptuous textile has become more widespread, but is still considered a very important part of the culture and heritage of the Akan people and indeed Ghana as a nation.

Yet another traditional cloth associated with the Ashanti people is the Adinkra textile- a printed or stamped traditional cloth featuring the Astante tribe Adrinkra symbol. The production of the cloth has its base in the village of Ntonso. Being an important part of Asante culture, the Adrinkra symbol is not only applied to textiles, but also crops up on the surfaces of pottery and walls.

Another prominent form of craft strongly associated with Ghana is the Krobo bead. Made by the industrious bead makers of Krobo (another Akan subgroup) as well as the Ashanti people, the distinctive beads are used primarily for bracelets. Characterised by their powdered look and rich colour palette, the little gems are entirely made from recycled glass. Holding on to tradition, the beads are still produced in open-sided huts with thatch-roofs under which the bead makers practise labour-intensive methods, using ceramic molds to shape the beads. Once made, the beads are carefully painted by hand, often using a multitude of colours to decorate each one.

To list yet another Ashanti speciality, the Ashanti ceremonial stool is a highly decorative specimen, encrusted with gleaming brass studs and to add glamour to important public occasions to show a prince’s status.

Coffin art – a collectable treasure
Removed from its original purpose but no less covetable, another art-form that has taken the western world by storm is the coffin. In this particular case, the object of desire takes the novelty shape of items dear to the person to be buried. A fisherman, for example, would end his days in a fish-shaped vessel. Originating in Teshie, a fishing community in Accra, this type of unorthodox funeral essential surfaced in the 1950’s, and they’re still used in Ghana at funeral ceremonies by affluent locals. On the international arena, meanwhile, the eye-catching items have become highly collectible and sell for small fortunes. As such, the coffin trade has become something of a booming business that’s extended well beyond its original morbid purposes.

The straw baskets, hats, fans and clothing of Bolgatanga
Located between Burkina Faso and Togo, Bolgatanga, also known as Bolga, is the capital of the Upper East Region of Ghana. Perhaps not as famous for its crafts culture as Ashanti, Bolgatanga is still notable owing to its heritage in naturally crafted straw baskets, hats and fans, as well as the indigenous clothing category, the Fugu. The locale is also significant producers of leather works.  If visiting town, the full spectrum of speciality products can be purchased at the Bolgatanga Market where local artists sell their wares.+