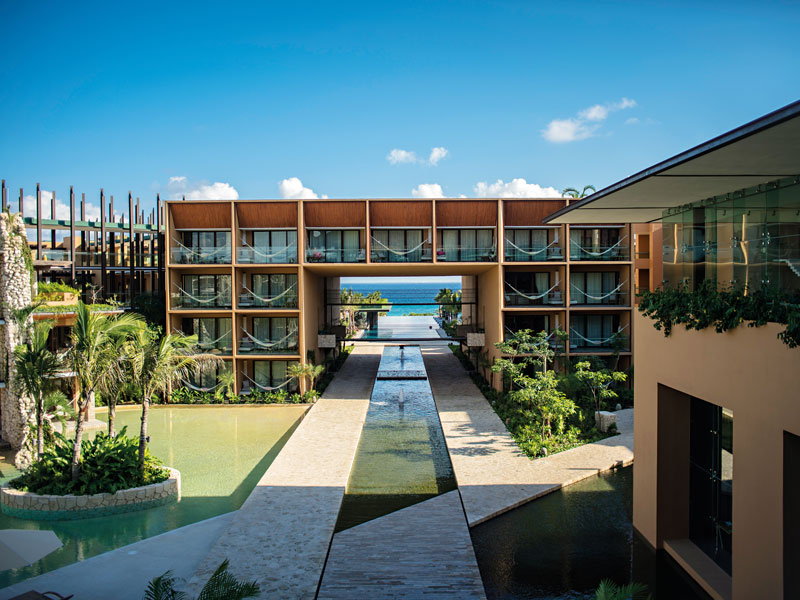 Serving as a platform to champion Mexican art, trade, cuisine and tradition, Hotel Xcaret honours everything about Mexico through a vast range of experiences and year-round events

Few places represent a unique fusion of the world’s history like Mexico. Home to two ancient civilisations – the Aztecs and the Mayans – as well as many of Spain’s early colonial sites, the country is truly rich in fascinating history.

The Yucatán Peninsula in particular exemplifies Mexico’s unique character. Jutting into the Gulf of Mexico, the state is dotted with the pyramids of the Chichén Itzá and other ancient architectural sites. The tropical jungle sprawls across most of the peninsula, populating it with exotic fauna and vividly coloured birds. Intriguing natural formations like water-filled cenotes abound, making the peninsula a paradise for beachgoers, history buffs and nature lovers alike.

Preserving culture
Mexico’s culture extends beyond physical sites: traditional practices still play a significant role in the country’s identity. Take, for example, Día de los Muertos, or Day of the Dead, which UNESCO has included on its List of Intangible Cultural Heritage. On the Day of the Dead, locals celebrate the lives of family and friends who have died. It coincides with the similar Mayan tradition Hanal Pixán, which translates to ‘food of souls’, and sees food take on an important role as traditional plates are prepared for the spirits.

Within this colourful tapestry of nature, history and tradition sits Hotel Xcaret Mexico. Serving as a platform to champion Mexican art, trade, cuisine and tradition, the hotel honours everything about Mexico through a vast range of experiences and year-round events. For example, we celebrate the Day of the Dead in Mexico’s traditionally vibrant style, creating impressive programming for our guests so they may better understand and enjoy the holiday. We honour the day through four distinct art forms: theatre, music, dance and gastronomy.

A special Hanal Pixán dinner is offered at Restaurant Las Cuevas to honour the ancestors on the Day of the Dead. This allows guests to appreciate the holiday in an educational way that also helps preserve the area’s culture.

At the Muluk Spa, guests can choose from numerous Mayan-inspired treatments, such as the aak’ facial, the refreshing teocalli body wrap or a temazcal sweat lodge.

Through authentic gastronomy that fuses local ingredients and ancient techniques, prepared by the most talented chefs, we share an invaluable component of the inimitable spirit of both the country and Hotel Xcaret Mexico.

Access to sustainability
Hotel Xcaret Mexico has made it easy for our guests to access sustainable hospitality. Through the All-Fun Inclusive concept that provides access and transport to nine different nature parks and tours (Xcaret, Xel-Há, Xplor, Xplor Fuego, Xenses, Xoximilco, Xichen, Xenotes and Xavage), guests can immerse themselves in the local culture in a variety of ways. At Grupo Xcaret, we believe this is the only approach to sustainable tourism: weaving culture throughout the hotel and its offerings in a way that is authentic and anchors each property to its surroundings. That is why our corporate management model is supported by our three pillars: people, planet and prosperity.

Having worked in the tourism industry for years, I believe all hotels should exist in part to showcase the local culture to visitors, but also to honour and preserve that culture, ensuring it thrives at a time when modern pressures so often work against cultural traditions across the world. Secretary-General of the World Tourism Organisation, Zurab Pololikashvili, recently praised Hotel Xcaret Mexico for “its commitment to providing employment opportunities, pushing innovation, promoting sustainability and fighting against climate change”.

When Hotel Xcaret Mexico was opened in December 2017, a key aim was to operate with a global perspective, but to always stay true to our Mexican heritage. This unique viewpoint has allowed us to make our own definitions of cultural and environmental sustainability. As a result, we are able to invite others to celebrate our unique location, our special blend of old and new culture, and the treasures that nature and history have bestowed on the Yucatán Peninsula.