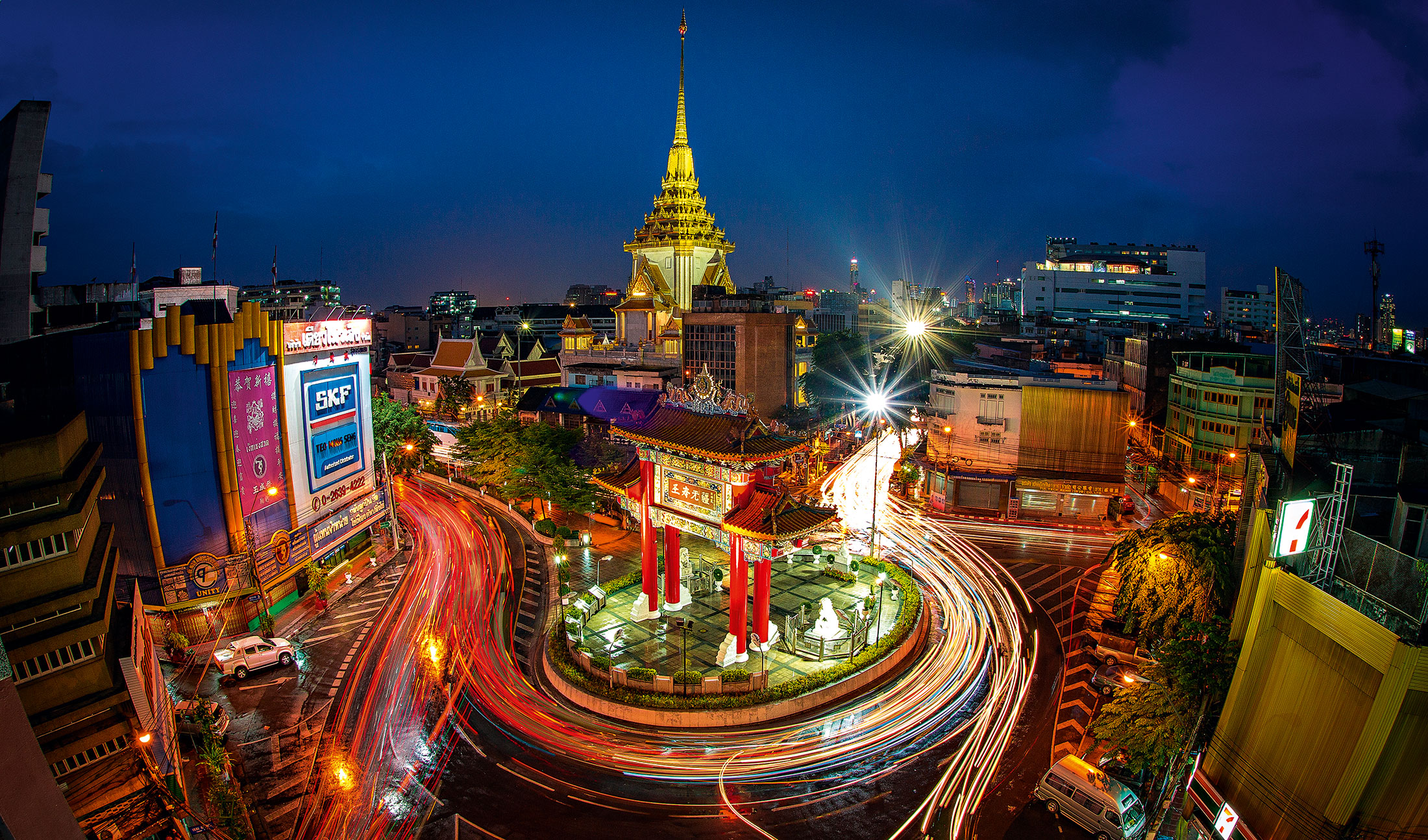 “One night in Bangkok and the world’s your oyster” goes the insinuating line from the catchy 1980s chart-topper. What was once the scene of sordid tales, seedy backstreets and underground dealings, however, has transformed itself over the past few decades to become a business hub at the centre of Southeast Asia’s tourism and commerce industries, ranking second in Business Traveller magazine’s 2013 ‘Best Business City in Southeast Asia’ awards. This achievement is something that is set to become even more of a reality over the next decade, as Thailand joins the ASEAN Economic Community (AEC) and experiences the benefits of the junta’s recently announced $72bn infrastructure plans.

That’s not to say that the vibrancy and sensuality of Bangkok have been replaced by the skyscrapers lining its horizon: far from it. The dusty streets are alive as ever with smells, sights and sounds; bustling with market vendors, tuk-tuk drivers and scruffy massage parlours alongside tourists swallowing scorpions and fuelling the underground sex industry that shot Bangkok into the limelight so many years ago. One look at Khaosan Road or the night markets of Patpong and it’s easy to see the city has firmly retained its reputation.

The number of political coups that Thailand has faced

But a quick glance towards the financial districts of Silom, Sathorn and newer sub-CBDs reveals a cosmopolitan skyline punctuated by modern hotels, world-class convention centres and the headquarters of multinational businesses – more than 15 of which feature on the Forbes Global 2000 list. Financial head offices meet sophisticated hotels like Sirocco, where stunning views over Bangkok’s sparkling cityscape greet guests at the world’s highest rooftop bar.

This reality forms a stark contrast to the images of shabby backstreets, questionable activities and haggling tourists that are so often conjured up upon hearing Bangkok’s name. But it’s that very attitude – including an openness to foreigners and an overwhelmingly liberal culture – which is now fuelling creativity, making the city attractive to overseas investors, and driving an emerging scene of entrepreneurship in the city. As this develops, and so changes the face of Bangkok business, the divergence between the city’s corporate world and its shabbier, liberal backstreet one is getting narrower.

A turbulent past
Once a small trading port on the banks of the Chao Phraya River, Bangkok as it is known now was born in the 18th century with the construction of the royal district; the splendour of which remains today, with spectacular sights like the Grand Palace and the Wat Pho golden temple defining the cultural landscape of the Old City. What also remains is an ongoing sense of political turmoil, which began in the 20th century with the replacement of absolute monarchy by constitutional rule and a succession of bloody uprisings against a line of military dictators.

Despite such turbulence, Bangkok was expanding rapidly in the late 20th century. Its economy was booming, with businesses sprouting up all over the city and Thailand’s yearly GDP growth topping ten percent, according to a report by The Economist. That was until 1997, when Southeast Asia hit a painful stumbling block in the form of the financial crisis. Bangkok was hit hard, with unemployment soaring and growth plummeting.

Thailand eventually began on its road to economic recovery after the ‘people’s constitution’ struck that year, giving its citizens new rights. A host of factors slowed growth once again, however, under the rule of billionaire Thaksin Shinawatra, elected in a landslide victory in 2001. When the middle class turned against him and mass protests filled the streets of Bangkok in 2006, a military coup seized the country. Those events were then mirrored this year in protests against his sister, Yingluck Shinawatra (elected in 2011), which eventually saw her ousted and General Prayuth Chanocha called in as Prime Minister.

The divergence between the city’s corporate world and its shabbier, liberal backstreet one is getting narrower

That coup has led the World Bank to predict that Thailand’s rate of growth will be the lowest in Southeast Asia until 2016, with tourism hit and businesses reported to be holding off until stability fully returns.

The Bank of Thailand and Siam Commercial Bank are more optimistic, however, with economists at the latter predicting the growth rate will return to 4.5 percent next year. And there’s no reason why it shouldn’t: the most recent coup marks Thailand’s 12th, and their reoccurrence throughout the 20th century did little to stop the country’s financial boom. It was economic, not political, factors that caused the 1997 crisis – and furthermore, while some areas are falling back, others are starting to flourish.

Rising start-up industry
One of these thriving areas is Bangkok’s rising tech start-up industry, which has begun to spark attention over the past couple of years. “It’s been driven by the rise of consumer spending in the middle class”, Adrian Vanzyl, co-founder & CEO of Ardent Capital, told Bangkok Online. “Then there’s internet penetration, which has improved, and in the last 18 months smartphones have overtaken regular mobile phones.”

He says that Bangkok is a more appealing place to launch an e-commerce business than established hubs such as Singapore for the very fact it represents a bigger challenge. Lower levels of English mean less competition and an increased likelihood that foreign investors will buy into it rather than starting their own. Vanzyl isn’t the only one taking note of the trend: Thailand ranked 18th in the World Bank’s Doing Business 2013 report, while the Nomads List puts Bangkok as the world’s third best city in which to launch a start-up (based on living costs, co-working spaces, investment climate and other factors).

According to Hubba (a co-working space aimed at start-ups), something that has been further fuelling the growth of start-ups in the city has been the recent increase in access to venture capital through companies rather than VC firms. Bangkok’s three biggest telecommunications players – AIS, DTAC and TRUE – have begun offering startup schemes that provide tech entrepreneurs with training and publicity alongside the much-needed capital.

Another key factor has been the rise of organisations like the Thailand Tech Start-up Association, launched in May this year to unite and drive growth in the sector. That’s compounding the relatively recent trend of co-working spaces springing up across the city to connect startup entrepreneurs with investors and others. “Before [co-working spaces] came about there were government sponsored events, but there wasn’t really a community of start-up folks that were connected and working together,” Amarit Charoenphan, co-founder of Hubba, told Business Destinations.

The country changes its name to Thailand, meaning ‘Land of the Free’

The Asian financial crisis occurs, with the baht falling sharply against the dollar

Tsunami hits the southwest coast of Thailand, killing thousands of natives and visitors

While Hubba was one of the first such spaces in Bangkok when it launched in 2011, the city now plays host to 30 of them. By bringing likeminded people together and hosting events to inspire budding entrepreneurs, Hubba is driving the city’s emerging scene. “We’ve had one of the best years so far,” said Charoenphan.

Bangkok’s start-up buzz was made clear at this year’s Thailand Echelon (the city’s answer to San Francisco’s TechCrunch conference). The 2014 event was the country’s largest so far, with 750 attendees and a score of guest speakers sharing ideas and discussing the latest in internet trends.

This new emphasis on sharing ideas and stimulating entrepreneurship in Bangkok is creating a string of success stories, including the e-book store Ookbee, which begun as a small start-up in the city and now operates across much of Southeast Asia. Meanwhile Builk, a social networking site for the construction industry, was chosen to represent the region at the 500 Startups event in October last year. “It’s going to take a while to get to New York or London standards but we’re shaping up to a few multi-million dollar companies in the near future,” said Charoenphan. He adds that 500 Startups and other organisations starting to capitalise on the Southeast Asian market are providing a further source of fire for future tycoons.

Hubba believes that Bangkok’s appeal for start-ups lies in the city’s attitudes. That lifestyle, defined by its liberality, has seen the city top the world’s best destination lists year after year, including being voted ‘Best city for travel’ for four consecutive years by US magazine Travel & Leisure. The low cost of living is also a major draw: “Singapore has its strengths in terms of access to a lot of capital, but if companies really want to build a product and save money, while generally having an amazing time living, then Bangkok and Chiang Mai are actually very strong contenders,” Charoenphan said. Once again it is the culture that runs throughout Bangkok, reflected in its underground scene and dusty backstreets, that is pulling in foreign entrepreneurs, driving the start-up scene and, in turn, fuelling the city’s investment opportunities.

And this is expected to grow even more in the future as the government moves to include initiatives for SMEs – of which start-ups form a crucial part – on the national agenda for growth. Entrepreneurs already capitalise on the country’s strong infrastructure, banking penetration and relatively easy legal setup, as the Thailand Treaty of Amity enables US investors to avoid ordinary foreign investment restrictions. Tech entrepreneurship could still grow even further though, if Thailand’s Board of Investment (BOI) initiatives – including an eight-year tax exemption for new companies investing THB 1m (around $30,000) – are updated with start-ups in mind, Charoenphan explained. As those changes are made and the emerging sector continues to thrive, the face of Bangkok business is beginning to alter; moving beyond traditional areas such as real estate towards a more technology-driven industry.

Ambitious transport plans
The emerging start-up scene isn’t the only area attracting attention and changing Thailand’s capital city. In August the government approved $75bn-worth of transport plans for the country: the eight-year project will see Bangkok’s light rail, as well as the country’s ports and dilapidated train system, all being renovated. This is likely to increase movement and provoke a further rise in investment across the country.

But expected to have yet more of an effect on Bangkok are the high-speed rail links (totalling $23bn) due to be constructed as part of these plans. These connections are set to link the city with Laos, Malaysia, Singapore and southern China by 2021, making a surge in trade and business between Bangkok and border hubs increasingly more likely. When a similar link was set up between Myanmar and Burma’s surrounding countries, the city saw a 41.2 percent year on year increase in trade, according to Myanmar Business Today.

These plans are also likely to cause the dynamics of mainland Southeast Asia to shift as China takes on an increasingly important role in the region. “There will be economic benefit across the South China and mainland Southeast Asia region, but also increased political domination by China in the mainland,” Geoffrey Wade, visiting fellow at the College of Asia and the Pacific at the Australian National University, told Business Destinations. Zhao Xiaogang, former chairman of China South Locomotive and Rolling Stock Co., told China Daily that the 3,000km line from Yunnan would see GDP growth of $375bn in the relevant countries.

That combination of new infrastructure, an emerging tech scene and the upcoming establishment of the AEC – which will enable the free flow of investment, capital and goods – is likely to curb the economic damage that has been predicted for Thailand by the World Bank. It is also like to change the face of the country’s biggest cities. With the advent of rising start-ups, new rail links and a future government chosen by the people, Bangkok could finally wave goodbye to the economic hiccups and violent uprisings that have defined it for almost a century. While it is unlikely to part with is its reputation for sordidness, vibrancy and an anything-goes attitude, this is exactly what causes it to top the list each time as one of the world’s most popular destinations – and what in turn is driving entrepreneurship and the future face of its businesses.