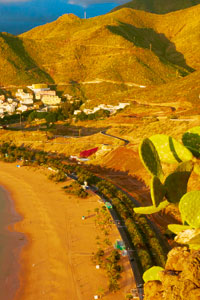 What better time to plan a couple of weeks away in the sun than one of those dreary grey days where everyone looks miserable, drivers seem more aggressive than usual and when you step out of the shower and look in the mirror you think back to the last six months spent in the gym and wonder, what was the point? Well grab your Speedos and some Ambre Solare factor 30, go online and have Royal Mail bring you some euros from the post office, look at the variety of deals currently on offer and when things are economically about as happy as Larry whose lost his job, I reckon there is an island beckoning you that holds a few surprises and even some mystery whilst offering sunshine on a budget without the all too familiar poor experience that paying less often brings.

You can’t afford Montserrat or the Maldives this year, then why not pretty much guarantee yourself some sunshine in the Canaries … more specifically, what about Grande Canary? I know, you think it’s all stag do’s and intoxicated assignations with plump legged ladies called Deirdre from Sunderland, but honestly, this little sun kissed outpost of Spanishness has so much on offer if stag do‘s and Deirdre aren‘t your thing! When you arrive at Las Palmas Airport, you might actually think you’ve arrived on the moon! But no gentle traveller, you’ve got a coach, bus or taxi drive ahead of you that’s going to whisk you part way around the island to Port Mogan or as they call it Puerto de Mogan, which looks like a nephew of Marbeya with less flash, the need for less cash and probably more Sunshine too! This little western corner of Grande Canary has its own micro climate and is, on average, a couple of degrees warmer than Las Palmas too and actually makes a pretty fabulous base.

It has to be said that Grande Canary offers something for everyone, Golf for Golfists, beery bars, nudist beaches for nudists and discos for dancers and prancers, the bright lights and glitz of Playa del Ingles and the fun and friendly Haba Centre, much loved by the gay community. Then there are German tourists with lobster tans and funny shorts playing crazy golf, the very British somewhat ello darlin’ Puerto Rico, the jet set Las Palmas Yacht Club and some of the most beautiful mountain scenery you’ll come across this side of some other beautiful mountains. But for me, Mogan offers a little gentleness and some rather plush hotels, good weather, reasonably priced food and even some rather nice Canarian restaurants; try the Canarian Potato which is considerably more delectable and less bland than it sounds.

Indeed, there are pyramids on Grande Canary that do bare a resemblance to the ziggurats of Aztec Culture and there is evidence that the Canarian dead were mummified although the Guanches idol is thought be many to be indication of a Cult of Gods and Goddesses.

Many Canarian’s still have piercing blue green eyes and blonde curly hair, which are seen as proof of Guanches lineage, although the possibility there are any 100 percent Guanches families living amongst the hills is unlikely considering the long and initially less than happy relationship this island has had since colonised in the 15th Century. Whilst all seems happy now, do visit the Museo Canario in Las Palmas and the caves of Cueva Pentada.

There is lots do aside from lying sublimely on a lounger shaded by a parasol, looking out onto the blue tranquillity of this sub-tropical swathe of the Atlantic ocean.There are plenty of villas available to rent, but Puerto de Mogan and some lovely hotels too. As a vegetarian I haven’t once encountered any problems with the food although it has to be said, that on my return from presenting a holiday show about the Canaries, the airport burger bar’s idea of a veggie burger was two sprigs of lettuce between two unbuttered burger buns. If that’s my only grumble, and it is, I suggest you book your trip soon or every Tom, Dick and Herman will beat you to it.

Andrew Blackall is a writer, producer, director and broadcaster who also runs The Lodge Avebury, a vegetarian B&B inside a 5500 year old stone circle. www.aveburylodge.co.uk