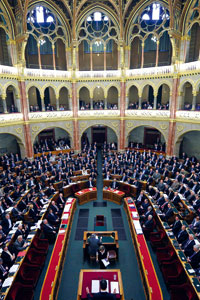 The downtrodden economies of Greece and Italy may have dominated the headlines in the last few months, but a country that struggles just as badly is Hungary. So severe is the situation that there are fears that the nation’s credit rating, already downgraded to junk by Moody’s, will be further savaged by ratings agencies, such as Standard & Poor.

The country has a debt level of about 76 percent of its GDP, which is the highest level among its peers in the region. Unemployment, meanwhile, stand at a worryingly high 10.7 percent. A further indication that the nation is holding on by a mere thread is that its debt management agency has struggled to get investors onboard to buy bonds and Treasury bills. One particular auction, which was scheduled to take place in October, even had to be cancelled due to low demand.

So what’s behind what seems to be the imminent collapse of the nation? The exposure to the eurozone’s debt is one obvious contributing factor, but the government’s erratic economic strategies are also very much to blame, and the leadership skills of the country’s centre-right Prime Minister Viktor Orban have been openly questioned. Among the many quirky decisions taken by Orban and his accomplices is their refusal to accept support from the IMF – despite analysts and economists’ having deemed a precautionary stand-by deal necessary to protect the Hungarian economy, while at the same time calming volatility on the global market. An IMF deal would give “a positive confidence shock to the market,” said Timothy Ash, head of global emerging markets research at Royal Bank of Scotland.

The Hungarian government’s aversion to rely on the support from the IMF stems from fears that it will result in unpalatable austerity measures that will prove unpopular among the country’s residents. This is not the first time Hungary has been offered a bailout deal by the IMF- in 2008 the country received $25.1bn from the body. Crucially, the deal was struck while the country was under a Socialist-led government, while centre-right player Orban decided to put an end to the standby loan agreement in 2010, and continues to stand firm against any further support.

Hungary’s controversial tax bill
While having managed to meet its strict budget deficit targets, the country has dabbled in some eye-opening methods to usher in well-needed funds. The most criticised of which is the special tax format directed to sectors such as banking, energy and telecommunications- in other words, industries that are known to generate growth.

The decision to go ahead with the plan surprised and infuriated the IMF and the EU. Defending his masterplan ahead of the vote, Prime Minister Viktor Orban asserted that the tax was indeed both fair and necessary. “It was the banks that caused the global crisis, so it’s normal that they should help resolve it. Banks can’t be treated as some sort of sacred cow. Taxing them is not a taboo.”

Few would argue with Orban on those points, but the risk is that banks will take their businesses elsewhere, leaving Hungary in the poverty zone. As a short-term solution, there have been some gains as the “crisis” taxes saw the Hungarian government levy a 187 billion forint ($998.6m) on the financial sector last year. In May 2011, it was announced that Hungary’s banking tax will be halved some time during 2013, but the levy will allegedly remain a long-term element of the tax system in some form even in the future.
Stubbornly claiming that the controversial tax bill has created much ado about nothing among critics, Zoltan Csefalvy, state secretary at the Economy Ministry, maintained during an interview for Gazdasagi Radio that banks won’t pull out of Hungary as a result of the tax levy. Csefalvy also went on to emphasise that he did not share analysts’views that Hungary needed a standby loan from the IMF. Orban seems equally confident that Hungary won’t sink, albeit trying to mask his complacency. “No one doubts that the budget deficit will be low next year. Hungary’s problem, as with Italy, is that it faces near stagnation paired with high debt and a leap in funding costs can drive both countries to the wall,” he told Reuters in November 2011. “If the Italians can crawl out of this malaise then I do not predict a collapse in Hungary.” Whether he is right in his predictions remains to be seen.