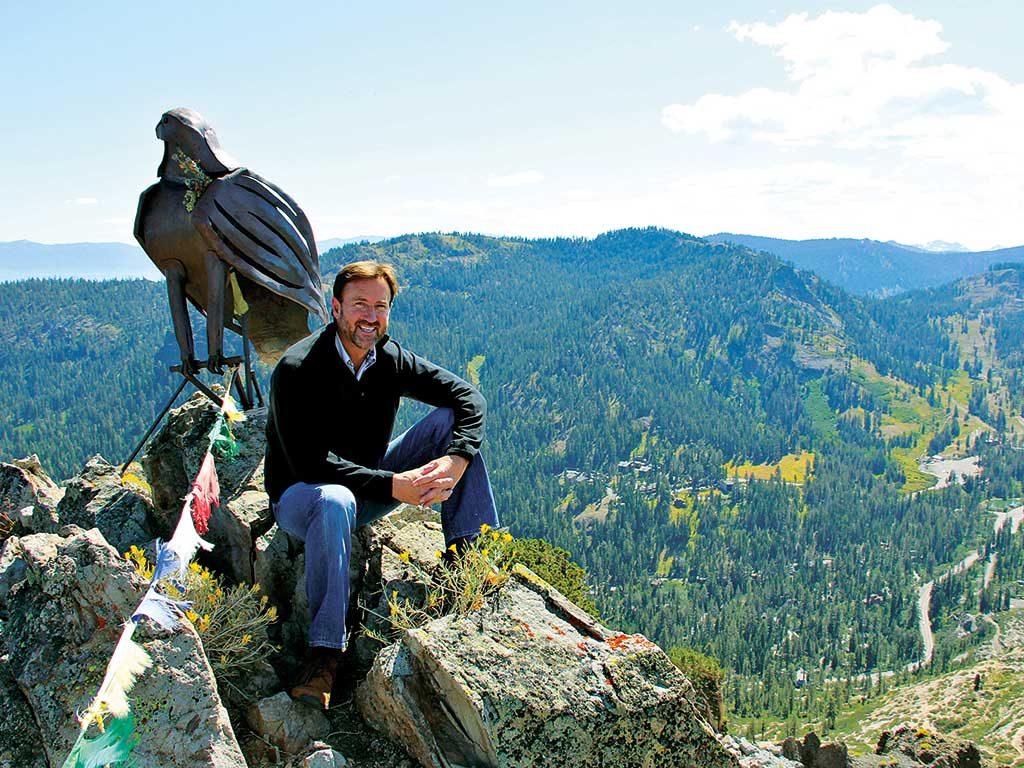 Nestled high in the Sierra Nevada mountain range, Lake Tahoe is a winter paradise for skiers, snowboarders and cross-country enthusiasts alike. Boasting thick layers of fluffy white snow and spectacular views, the lake’s slopes are now home to nine world-class ski resorts, offering a range of snow sports for visitors of all abilities.

While the flourishing California ski scene is attracting an ever-increasing number of visitors each year, one stunning resort has emerged as the ultimate Lake Tahoe destination. Since CEO Andy Wirth first took the helm at Squaw Valley, the resort has undergone something of a transformation, shedding its once-dated image and establishing itself as a premier mountain locale. In 2016, Squaw Valley’s new status was solidified when the readers of USA Today voted it the Best Ski Resort in North America.

Modelled after the top European skiing destinations, Squaw Valley first opened its slopes in 1949, making it one of the US’ very first winter sports resorts. Just 11 years later, Squaw Valley was propelled to international fame after it was chosen to host the 1960 Winter Olympics. The games were the first to be broadcast on live television, signalling the meteoric rise of US skiing and firmly putting Lake Tahoe’s slopes on the global snow sports map.

In the years that followed, Squaw Valley became the hottest destination on the international ski scene, welcoming a host of winter sports enthusiasts from across the globe. However, as the memories of Squaw Valley’s Olympic legacy began to fade, visitor interest in the resort also waned. By the 1990s, Squaw Valley had lost its way, falling behind its rivals and struggling to stay relevant in an increasingly competitive market.

In the mountain resort industry, I truly found something that combines my love for the mountain landscape and my interest in developing a career

That remained the case until industry veteran Wirth stepped into the CEO role in 2010. Since that pivotal moment, the resort has undergone a transformative $70m revamp, while Wirth’s experience and unbridled passion have breathed new life into Squaw Valley’s iconic slopes.

Born to be wild
From a young age, Wirth’s life was moulded by North America’s mountains. A love for the great outdoors runs in Wirth’s blood, as his grandfather, Conrad Wirth, directed the National Parks Service for Presidents Eisenhower, Kennedy and Johnson. Wirth certainly inherited his ancestor’s profound connection to nature, spending most of his formative years exploring both the expansive North American mountain ranges and the rugged Scottish highlands.

As he approached his early 20s, Wirth began to work as a backcountry ranger in the Rocky Mountain National Park, where he would coordinate rescues of sick and injured visitors, patrol trails and keep watch over endless cross country routes. Finding a sense of purpose in these outdoor endeavours, Wirth then joined a ‘hotshot crew’ in northern New Mexico, where he helped to fight and suppress dangerous rural wildfires.

“In my late teens and early 20s, I spent virtually all of my time in the mountains”, Wirth told Business Destinations. “In those formative years, I was always either fighting fire, or on horseback, or hanging by a rope on the side of a cliff on rescues, so mountains really are a part of my initial makeup.” While this line of work proved immensely rewarding for Wirth, he ultimately found it was difficult to build and maintain a steady career around fighting woodland fires and being a backcountry ranger.

By his mid-20s, Wirth had gained a degree in History and Economics from the University of Edinburgh, and felt inspired to put his new business knowledge to good use. Not wanting to abandon the mountain landscapes that had come to define his youth, Wirth decided to embark on a career in the mountain resort industry, starting as an intern at the Steamboat Ski and Resort Corporation on the snowy Colorado slopes.

Finding a home on Colorado’s impressive peaks, Wirth stayed with the company for more than 20 years, working his way up through the ranks. In 2007, he moved on to pastures new, joining the team at Intrawest Resorts, a company based out of Vancouver. Prior to joining Squaw Valley, Wirth’s extensive career had given him responsibility for a total of 21 ski resorts across New England, Canada, Colorado, Utah and California. He told Business Destinations: “Thankfully, in the mountain resort industry, I truly found something that combines my love for the mountain landscape and lifestyle and my interest in developing a career.”

Success on the slopes
In the summer of 2010, Wirth was officially named the new CEO of Squaw Valley, and immediately began his campaign to turn fortunes around at the resort. Soon after his appointment, the resort launched a substantial $70m upgrade operation, aiming to give Squaw Valley a competitive edge on its rivals. After just one year with Wirth at the helm, the resort had effectively rebuilt its once-prominent reputation, moving back into the top 20 percent of ski resorts for customer satisfaction.

“The only thing that’s changed is everything” is the motto that underpins Squaw Valley’s multimillion-dollar revamp. From mountain design to fine dining, Squaw Valley is hoping to step up every aspect of its mountain vacation experience. Squaw’s snowy slopes are now home to high-quality lodgings, a luxurious yoga studio and the world’s first ski-thru Starbucks, where customers can enjoy a coffee to go at 2,400m.

In 2011, with the Squaw Valley revamp well underway, the resort announced it had purchased neighbouring ski destination, Alpine Meadows. The acquisition instantly added a further 2,400 skiable acres of land to the Squaw Valley portfolio, creating the ultimate Californian snow sports destination. At the newly merged Squaw Valley Alpine Meadows, customers can purchase a single ticket for admittance to both sites, allowing visitors to take their Lake Tahoe skiing experience even further.

According to Wirth: “Although Alpine Meadows is directly adjacent to Squaw Valley, it has a different terrain… Its slopes provide great adventure terrain, a more family-friendly terrain and also a slightly higher altitude. Alpine Meadows is not exactly the same as Squaw Valley and that’s what made it so attractive.”

While on-site improvements are a vital part of the resort’s renaissance plan, Wirth is also focused on enhancing transport links to the resort. Non-stop direct flights are now in place between Reno-Tahoe Airport and many major US cities, while direct flights from London are also in the pipeline.

A defining moment
Four years ago, Wirth experienced a life-changing accident. A born thrill-seeker and lover of adventure sports, Wirth developed a passion for skydiving, indulging in the hobby whenever his busy schedule allowed. On October 13, 2013, an unfortunate sequence of events during a jump led to Wirth missing his designated drop zone and crash landing into a nearby vineyard.

While Wirth escaped with his life, a stray pole in the vineyard tore off his right arm. Through his own quick thinking, Wirth was able to slow the bleeding from his brachial artery before being airlifted to hospital. There, Wirth’s arm was surgically reattached, and has been slowly reconstructed in the years following the accident.

While Wirth is dedicated to taking Squaw Valley forward, he remains equally focused on creating a greener future for his company

Over the course of the past four years, the accident and its aftereffects have had a profound impact on Wirth’s personal and professional lives. Fortunate to have survived that day, Wirth’s immense gratitude now permeates every aspect of his existence.

“I have a very strong sense of deep gratitude for not only being here, but for every opportunity that comes my way”, he said. “The accident did have an impact on me, and I think it’s made me a better leader. I’m very driven and I have such a real, genuine sense of gratitude for what every day brings us – even if it provides some challenges.”

Greener slopes
As Squaw Valley looks to the future, Wirth will be applying this healthy dose of optimism to his forthcoming projects at the resort. With California now emerging from a record-breaking, four-year drought, Squaw Valley has just recorded the snowiest January in its history, with 180 inches of snow falling in just seven days. As one extreme gives way to another, such weather variability serves as a pressing reminder of the very real presence of climate change. And so, while Wirth is dedicated to taking Squaw Valley forward and generating results for the resort’s investors, he remains equally focused on creating a greener future for his company.

In an effort to actively reduce the carbon footprint at Squaw Valley, Wirth has ensured all new constructions at the Squaw Valley resort are as energy efficient as possible. He has also introduced eco-friendly mass transit systems to shuttle visitors around.

Squaw Valley is now looking to move its energy sourcing away from fossil fuels and onto renewables, and no longer uses coal in any of its operations. Conservationism and sustainability lie at the very heart of Squaw Valley’s values, and with Wirth at the helm, the resort is fast moving towards an environmentally friendly future.

“I want to bring my love of the mountains into the conservation efforts of our company”, said Wirth. “We’re aiming at setting the highest possible standard, so that in 2050, people will look back and say that our team left this place in much better condition than we found it.”