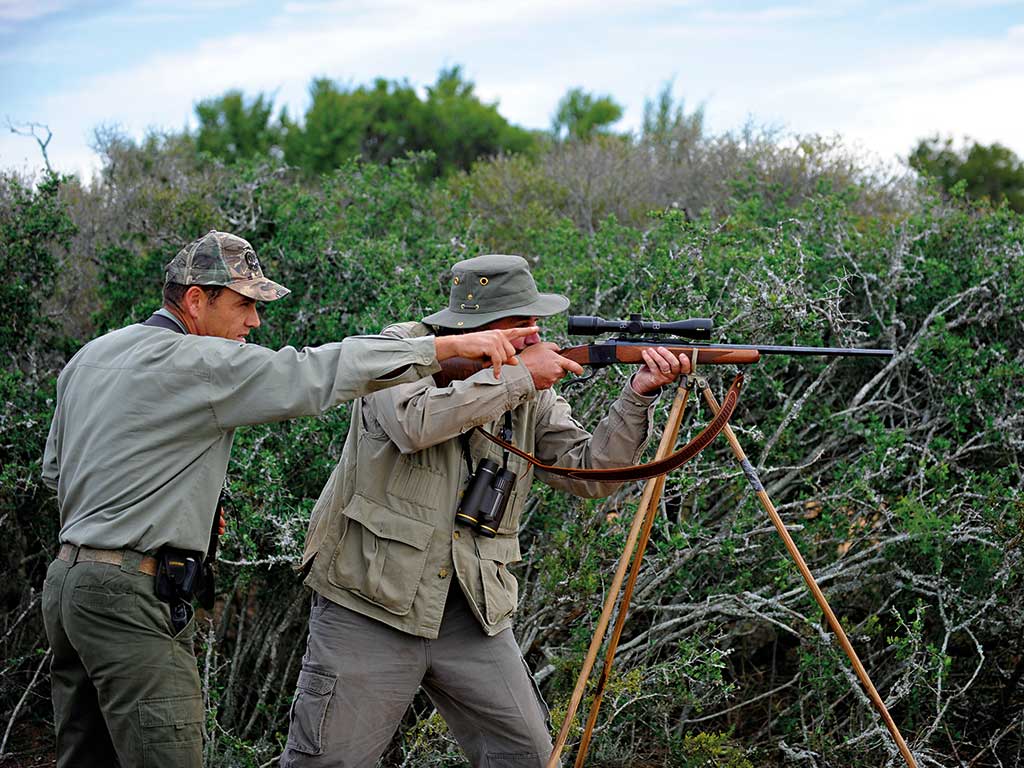 In contrast to many other types of tourism in Africa, hunting is highly lucrative

A land of exotic wildlife, rugged terrain and rich culture, safari-seeking tourists have been flocking to Africa for countless years. According to the African Development Bank, in 2015 alone the continent attracted a record-breaking one billion visitors, making tourism one of its fastest growing industries. The millions generated through tourism revenue each year not only give a boost to local economies, they also provide critical support for conservation efforts and protection of the ‘big five’.

Seemingly contradictory to these goals, hunting in Africa is one of the most profitable types of tourism. Albeit hotly debated, there is an argument that legal, well-regulated and sustainable hunting practices can promote conservation and support the development of rural communities. The desert-lined nation of Namibia, for example, has signed on to this contentious scheme, and as a consequence has seen its populations of endangered animals flourish.

In the face of vociferous animal rights activists projecting anti-hunting rhetoric across social media, Namibia has demonstrated that, with the right structures in place, conservation and hunting tourism may not be such strange bedfellows after all.

The price list
In contrast to many other types of tourism in Africa, hunting is highly lucrative. According to figures from Safari Club International, between 2012 and 2014, hunters in Africa spent a total of $326.5m per year. In addition to licence fees, accommodation costs and safari guide charges, the price tags on animal ‘trophies’ can be worth thousands of dollars.

As an example, the Hunters Namibia Safaris website quotes a daily fee of $570 per hunter and boasts a price tag of $6,600 for a single cheetah. Multiply these figures by the number of hunting tourists Namibia plays host to – which in 2015 rose to more than 7,000 – and the economic significance of the practice becomes clear.

Seemingly contradictory to conservation goals, hunting in Africa is one of the most profitable types
of tourism

The knock-on effect is that other industries also benefit. In drawing visitors to parts of the continent that may not be scenic enough for standard photo tourism, large sections of land without any other means of generating an income have the opportunity to profit. As 80 percent of Namibia’s population lives in rural areas, the income generated through hunting tourism has created employment where few other job prospects exist. This is primarily the result of infrastructure development to support the industry in areas such as transport, restaurants and accommodation.

For example, the daily fee of $570 quoted from Hunters Namibia Safaris does not include a variety of additional, necessary charges, such as hotel stays either end of the safari tour, weapon hire, transportation to and from the safari park, and trophy shipping costs. All of these additional fees contribute to the wider tourist industry revenue.

An ironic saviour
The concept of hunting to encourage conservation seems antithetical, but, as AJ DeRosa, a sustainability hunter and Creative Director of Dangerous Cow Publishing, told Business Destinations: “The idea of hunting something to save something is not a far-fetched concept: North America’s entire conservation model is built on it.”

Hunting animals attaches a certain financial worth to them, which therefore raises the value of their natural habitat. This in turn creates an economic incentive for landowners to protect their environment. Equally, it prevents the land from being developed for agriculture, which, as WWF stresses on its website, “is probably the greatest threat to the variety of life on this planet today”.

Additionally, human-animal conflict is reduced when landowners put greater effort into protecting the borders of their properties. For example, when game animals wander onto farmland, they are often killed in order to protect crops and livestock. This is no different from ‘problem animals’ anywhere in the world, explained DeRosa: “We have bears out west that will become cattle killers, and when they become cattle killers, if the locals don’t go out and kill them, the fish and game department will.”

Therefore, as Maxi Louis, Director of the Namibian Association of Community Support Organisations, pointed out: “Hunting in one form or another will always be necessary.” Mirroring DeRosa’s argument, she continued: “For example, when a lion terrorises a village and kills domestic stock, or there is an over-abundance of a species.”

Louis’ second point is a salient one, and was brought to the fore in the aftermath of the killing of Cecil the lion in 2015. The stream of anti-hunting rhetoric sparked by the feline’s sensationalist death deterred big game hunters from travelling to Zimbabwe, where Cecil was killed.

As a result, the lion population in the country rose, creating an unsustainable situation where other species, such as wild dogs and leopards, were devastated by the overwhelming numbers of predatory big cats. The conservancy in Zimbabwe was forced to cull hundreds of lions to restore balance back to the ecosystem.

The irony, therefore, behind the world spreading the emotive tale of Cecil is that, by perpetuating anti-hunting sentiment, greater numbers of lions were subsequently killed. According to Louis: “If there is no hunting, there will be culling.”

Presenting the facts
Although it generates millions for the impoverished communities of rural Namibia while also preventing crop damage and ensuring balance in ecosystems, for the rest of Africa, the hunting tourism trend is slow to catch on. As Louis confirmed: “Tourism and conservation hunting are vital ingredients in Namibia’s economy… It makes sense to encourage [them].”

However, this is easier said than done. There are many different factors that play into the success of this niche branch of tourism. Attitudes and perceptions about wildlife are vastly different between African rural communities and the rest of the world: while animal activists focus on emotive moral objections to hunting, indigenous populations consider animals to be a resource. As they live in direct contact with them, locals have an incredibly different relationship with the animals compared with an international audience that opposes hunting altogether. This therefore requires a significant shift in mentality and public awareness.

As 80 percent of Namibia’s population lives in rural areas, hunting tourism has created employment where few other job prospects exist

As DeRosa said, the perception of hunting in Africa is subject to “bad branding… In Africa, the public opinion of the rest of the world has such an impact”. It is therefore imperative hunting tourism is promoted in a way that balances the facts against the emotional sensitivities of the masses.

There is further complexity that comes from the number of different governance structures across Africa. The unfortunate reality is Namibia proves to be the exception to the rule when it comes to responsible conservation hunting tourism. As one of the only African countries to incorporate conservation efforts into its constitution, its government has worked hard to ensure accountability and transparency are guaranteed throughout all hunting-related tourism revenue streams.

Louis emphasised that, in Namibia, “revenue from conservation hunting goes directly to conservancies in accordance with contracts drawn up. Conservancies are democratic bodies with management committees, which have to produce yearly accounts for the annual general meeting of its members”.

A significant proportion of the arguments against hunting tourism are therefore based on those countries with weaker administrations. These nations often struggle to achieve conservation success due to high levels of corruption, which in turn causes excessive hunting quotas, illegal poaching and poor monitoring. These hunting revenues rarely trickle down to the communities in need, negating conservationists’ arguments that the practice benefits indigenous populations.

Sharing is caring
It is important to note that blanket policies cannot be used to manage something so multifaceted. This is particularly so in a continent made up of 54 distinct countries, and which is home to more than 3,000 different tribes. Hunting tourism in Africa, noted DeRosa, “has to be done in a micromanaged context”.

Nevertheless, countries have great scope to learn from Namibia’s success. As Louis highlighted: “We can learn from each other and enrich each other’s experience.” For example: “Zambia is learning from Namibia’s community-based natural resource monitoring, while Namibia is learning form Zambia’s approach to conservation agriculture, and both countries are sharing the cross-border tasks such as anti-poaching activities.”

Although this is only a small-scale example, information sharing is a vital part of developing conservation management efforts across borders. Open dialogue between countries is important for shared best practices and to learn what does and doesn’t work for different countries.

There is no question hunting tourism is a complex and emotive issue. However, the logic speaks for itself, and it needs to be heard. Thanks to the conservancy approach adopted in Namibia, the dual role of hunting tourism as a successful tool for both conservation and national development has been effectively established, and is progressively being recognised across the continent.

Even in the face of ardent anti-hunting activists, the country has successfully developed this trend of well-regulated, legalised hunting as a viable and lucrative form of tourism. Not only has this created jobs, but it has also sustained communities and protected vast expanses of land.

As a consequence, numbers of threatened and endangered wildlife species in the country have flourished, thus proving – at least for Namibia – that this ironic proposition may not be so contradictory after all.