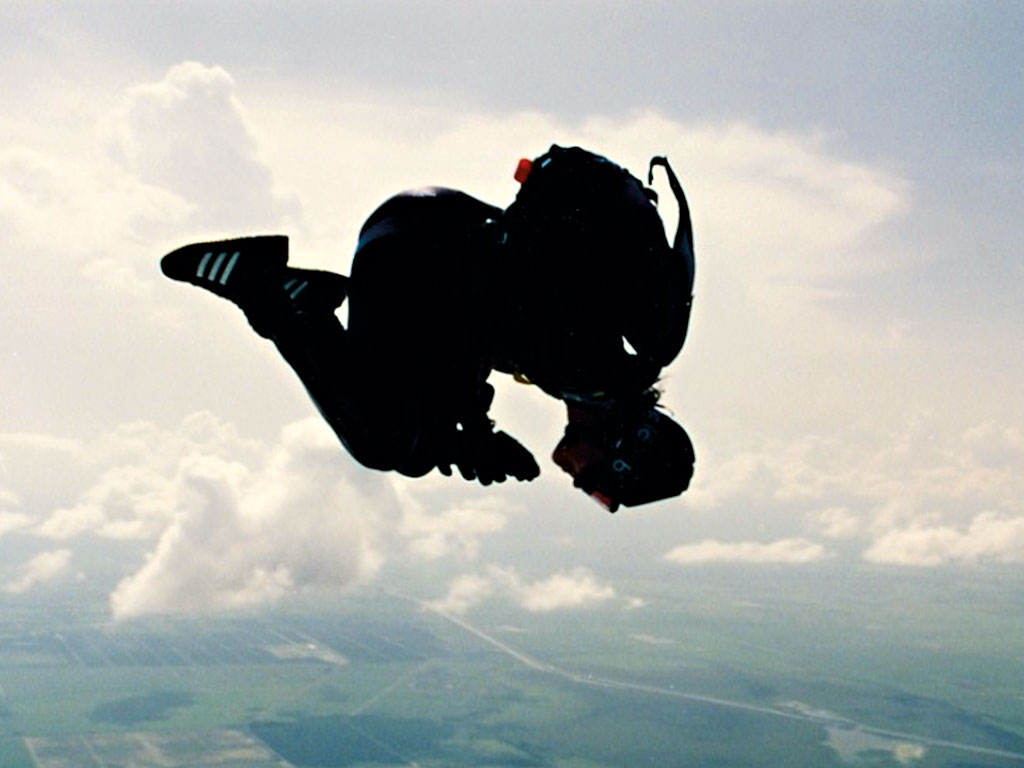 Cheryl Stearns free-falls during one of her skydives. During her career, Stearns has done over 20,000 skydives

Boasting 30 world records, thousands of skydives and an ambition to one day jump through the stratosphere, American skydiving champion Cheryl Stearns has earned herself a rightful place among the biggest names in the history of the sport. Her 43-year-long career has taken her from the arid desert lands of Arizona, where she grew up, to jumps in Asia, Europe, the Middle East and beyond. Her exploits have twice earned her the title of Women’s Overall World Champion in style and accuracy parachuting: what this essentially means is that Stearns is an expert at carrying out manoeuvres mid-freefall, and at landing on the exact spot she targets.

When all the hours are added together, it turns out Stearns has spent a total of more than five days falling through the sky, experiencing the world in a way very few ever will. She has jumped over 20,000 times – an achievement no other woman, and very few men, can claim – and has covered more than 35 countries, landing everywhere from the Statue of Liberty and a pool at Sea World to the St Louis Arch and the Swiss Alps.

Not satisfied with all this, Stearns continues to set herself other challenges, such as doing 352 skydives in the space of a single day back in 1995, setting a Guinness World Record for the most jumps by a woman in 24 hours. Her next goal is to attempt one of the highest altitude parachute jumps to be made in history: she wants to skydive from over 130,000ft, which has only ever been attempted once before.

As the first woman to join the Golden Knights – the US Army’s elite parachuting team – back in 1977, none of this is beyond belief. Stearns continues to break the boundaries and to prove that ambition, passion and hard work are the key to achieving the most courageous of goals. Business Destinations’ Laura French spoke to her about how it all began, what motivates her in skydiving, and how she’s using her own knowledge to help shape the world’s future champions.

You were the first woman to complete 20,000 skydives. How does that achievement make you feel?
In a way it was just another jump, but when I really look at it, I realise it has taken over 40 years of enjoyment and hard work to reach this milestone. I’m not a professional jumper so I have had to save and work for my jumps, so it’s been a rewarding career and sport for me.

What’s been your proudest achievement to date?
Getting into the army parachuting team was a huge achievement, because that helped me to get the real training I needed. It really kick-started my jumping career. The other time was when I won my first World Championship in 1978 – I was up against lots of well-known jumpers, and I just happened to beat all of them, even though they had no idea who I was.

How did you first get into skydiving?
I always wanted to know what it felt like to travel at 120mph and fall through the air. To satisfy that, I needed to go and do a jump, so I looked it up in the Yellow Pages and found the closest parachuting place.

If tandem was around 43 years ago, I probably would have just made the one jump and that would have satisfied me. But we didn’t have that at the time, so I had to make many jumps before I could do a 30-second freefall and actually see and feel myself in the air. Then I found out about competing in parachuting, which I didn’t even know you could do, and that’s how I continued on with it.

I’d always been competitive and this was one sport that was really challenging in terms of mind and body awareness, as well as decision-making. Since then the equipment has changed, so I’ve had to adapt to those changes.

What have you learned from the sport?
I grew up very fast by jumping at an early age [17]. It taught me to respect my peers, equipment and life in general. I found out that we’re not invincible.

What is it about skydiving that drives your passion for it?
I have always loved jumping and flying because it’s just me against me. I am totally in control – I’m just flying my body or my parachute. I constantly need something to challenge me and, like flying an aeroplane, it’s completely hands-on.

Where’s the best place in the world you’ve skydived, and what would your dream location be?
I have jumped all over the world – I really enjoyed jumping onto the side of a mountain in the Swiss Alps, and onto one of the Thousand Islands in Indonesia, which I did from a C-130. I also jumped out of a German Junker – riding in that, let alone jumping out of it, was pretty neat. I would love to jump into Yosemite Park.

What’s your biggest goal for the future?
To make a high altitude jump, from at least 130,000ft.

You had a bike accident in 2014. Do you find it ironic that your biggest injuries have been on the ground?
Not really. In jumping I can control my environment, or at least make the decision that it isn’t safe to jump due to weather or my ability. When you’re riding a bike or driving a car, you can’t always control what the other drivers do. The only thing in jumping that I can’t control is the plane ride up, and whom I compete against.

Do you feel more at home on the ground or in the sky?
Definitely in the sky – either flying or jumping.

What thoughts cross your mind just before a jump? Do you still get scared?
I only get scared if I don’t like the conditions. I’ve never been injured jumping, so that says a lot about safety and making good decisions on when to jump and when not to. My heart races and then calms down when I compete, because I always want to make sure I perform to the best of my ability. Then, when I’m in the moment, my instincts take over.

What are the most important qualities for skydiving?
All jumpers are different, but it does take a certain kind of person to do it. You need to have confidence in yourself. Jumpers like adventure, and they tend to be the types of people I gravitate towards.

How have you used your experience to coach others?
I teach one-on-one if people ask me for advice. I run the annual Cheryl Stearns Accuracy Training Camp and Meet, which takes place in Lodi, California every April. People come from all over the world to jump and get some coaching, either from me or the other jumpers attending. Everyone has a good time and learns a lot. This is my time to give something back to people.

Before, the goal for me was to excel and to try and win at parachute meets, while sharing my knowledge with others. Now I enjoy coaching and seeing people excel from what I’ve taught them. The best part is when one of my students beats me – that’s when I know I’ve done a good job.

What’s your number one mantra?
Be safe and don’t push your limits. You can keep moving your limits by educating yourself.

What motivates you the most?
The challenge of whatever is out there, and the pure love of whatever I am going after.