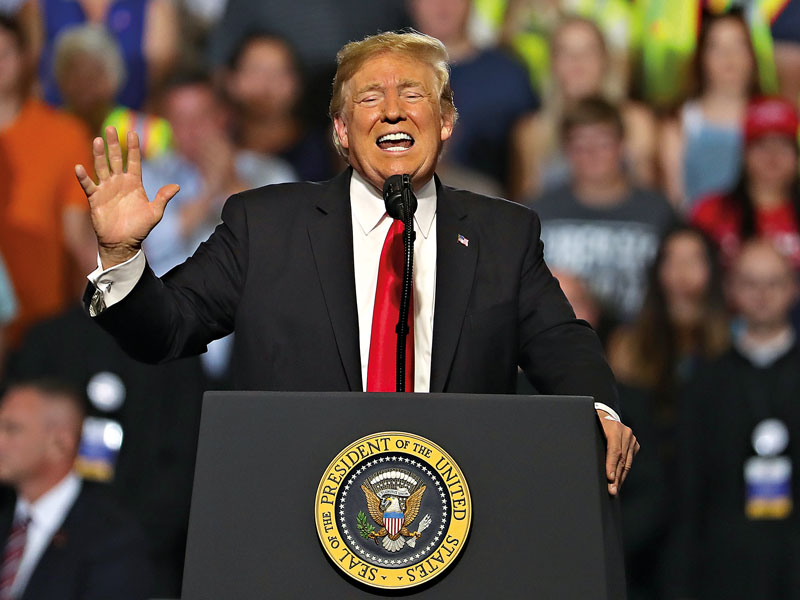 This year, Trump imposed massive import tariffs not only on China, but also on America’s Asian and European allies

The national park of Thingvellir, 30 miles east of Reykjavik, is Iceland’s most important historical site. It is the place where the Vikings founded the first democratic parliament in 930, and where the Republic of Iceland proclaimed its independence from Denmark in 1944.

It also sits on a massive geological fracture, where the small Hreppafleki plate forms a narrow rift between the tectonic plates of North America and Eurasia. In the current geopolitical environment, the symbolism is potent.

No doubt, there is a rift between the US and Europe. The Hreppafleki plate can represent China, which has reclaimed its position in the top tier of global powers – a situation to which the US and Europe cannot seem to agree on a response. Or perhaps it is more accurate to have Hreppafleki represent US President Donald Trump, whose repeated provocations – some aimed at China – have depleted transatlantic goodwill, while undermining America’s role in the world.

In the past, Europeans often diminished the value of geography, which would have demanded a closer relationship with Russia, in favour of the geography of values

The Cold War, from 1945 to 1991, was characterised by a bipolar world order in which stability depended on a balance of nuclear terror. After 1991, a more hopeful order emerged led by a hegemonic US, though it was still destabilised by forces like international terrorism. But we have now entered a new phase in which the US is actively alienating the rest of the world by violating norm after norm.

Strained alliance
This year alone, Trump imposed massive import tariffs not only on China, but also on America’s Asian and European allies; disrupted the G7’s annual summit, accusing America’s closest allies of unfair trade practices; and then met with Kim Jong-un in Singapore, where his insulting behaviour towards America’s European and Canadian partners gave way to effusive praise for North Korea’s brutal dictator.

And he launched (and, under political pressure, rescinded) a cynical policy of separating migrant children from their families at the southern US border.

In short, Trump has summarily divorced his allies, in political and emotional terms, as he has attacked the values on which democracy depends. In that sense, this moment amounts to the precise antithesis of the autumn of 1989, when the Soviet bloc began to collapse and democracy seemed triumphant. Now, it is not clear what the US stands for, and that uncertainty puts the entire transatlantic alliance at risk.

To be sure, this is not the first time transatlantic relations have come under strain. In the early 1960s, French President Charles de Gaulle rejected NATO, a key pillar of the relationship, by incrementally reducing France’s military and political participation.

Whereas US President John F Kennedy presented NATO as a shared roof supported by two pillars – the US and Europe – de Gaulle viewed it as a mechanism of US hegemony. In any case, France’s withdrawal from NATO did more to isolate the country than to weaken the transatlantic alliance.

The relationship was challenged again in 2003, when France and Germany, among others, refused to join the US and the UK in the (ill-advised) invasion of Iraq. But, again, the survival of the transatlantic alliance was never in doubt.

A relationship at risk
The difference today is that it is the US that is pushing back against the alliance – if not the entire western liberal democratic model. A sheep gone astray is one thing: if the shepherd leaves, the entire herd is at risk. Yet, as ‘America First’ becomes ‘America alone’, that seems to be precisely what is happening.

But Trump risks overplaying his hand. America’s power relative to other countries has reached its postwar nadir. With the world becoming increasingly entrenched in a multipolar order, the US can hardly afford to dispense with allies.

Of course, that is not what the Trump administration sees. The president and his allies remain convinced that hard power is all that matters and, from a military perspective, the US remains the top dog. But this dominance is not guaranteed to last, especially in the face of massive Chinese military investment. More importantly, hard power alone is not enough to sustain alliances, much less exercise global leadership.

Trump seems unlikely to recognise this and change course. But even after he leaves the White House, a return to ‘normalcy’ is not assured. While Trump hardly represents all of American society, we should not delude ourselves: his victory was no accident. There was – and still is – an appetite for unilateralism and isolationism among American voters. That will not disappear from US politics, even after Trump does.

Adjusting to a new reality
America’s traditional allies therefore cannot simply wait Trump out; instead, they must adjust to today’s reality. In the past, Europeans often diminished the value of geography, which would have demanded a closer relationship with Russia, in favour of the geography of values, which justified a transatlantic orientation.

When the US is led by an administration that is betraying those values – going so far as to rip children from their parents and put them into cages – that argument no longer applies. The only way forward is to stand up to the US in defence of our values and interests.

Trump may be good at mobilising his base at home or connecting with ideological ‘friends’ abroad, but without the support of its true allies, America’s global influence will only deteriorate further. From a geopolitical perspective, that approach can produce only one result: making China greater faster.