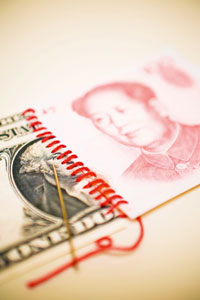 Your average Business Destinations reader likes to keep themselves informed as to the deep currents affecting the world economy, with recent Sino-American wrangling over trade doubtlessly gaining your attention. China has been accused of manipulating the value of the yuan over many years, with the goal of cheapening the cost of its exports – recently China overtook Germany as the world’s greatest exporter – and therefore giving its companies a competitive edge. This has rankled with the Americans, especially the historically protectionist Congress, the media and concerned public opinion.

While China has allowed some appreciation of its currency, from 2005 until the financial crisis hit in 2008, and – it has been reported in some media – from June 2010, ostensibly allowing for a seven percent rise in value against the dollar. This appreciation has, apparently, been controlled and artificially prevented from attaining its true, floating value; additionally, it illustrates the benefits of a fixed exchange rate underpinned by copious reserves. Indeed, critics claim that the yuan remains undervalued by 25-40 percent, giving an idea of the significant advantage accruing to Chinese exporters.

An America with a heritage of protectionism and, additionally, in the economic doldrums, has, naturally, exhibited concern over what Congress, the media and public opinion believe not only confers an unfair advantage, but also adversely affects American workers and the American economy. Last October the US Senate passed a bipartisan bill slapping tariffs on goods from countries that undervalue their currency, China being the most egregious offender.

Whilst, naturally, the Chinese have voiced opposition to the bill, and, additionally, President Obama has too, contrarily the House Speaker and Republican leader John Boehner has also joined those opposing the bill, which would require House ratification.

Given the internal politics of the Republican party, and the importance of good Sino-American trading relations at a time when the global economy is so fragile, it is likely that this is motivated by justifiable fear of a trade war at such a time and the realisation that this would be a worse evil than the lesser one of the corollary of unemployment affecting his constituents.

It is interesting to consider the strange bedfellows that the issue has created, the Chinese, the president and the republican leader favour obfuscating the issue. Conversely, the Democratic leadership in the Senate, in the form of Harry Reid, the majority leader, and Charles Schumer, chairman and member of a slew of Senate committees, including finance, have been outspokenly critical of Chinese trade policy and its impact, whilst Federal Reserve chairman Ben Bernanke has said that China’s policy hindered a more balanced growth path. Given the centrality of the division of powers to American politics and how this is reflected in the debate over the matter, both within and outside of Congress and the executive branch, Chinese policy seems altogether less complex, even if, contrarily, more opaque. China will have a trade policy that suits itself and its interests, as framed by its political leadership and the People’s Bank of China, though admittedly WTO membership confers upon it certain responsibilities, as well as bolstering certain rights. It would seem that the Democratic leadership are grandstanding on the issue to bash the Republicans, not necessarily entirely undeservedly, but, given the context, hardly responsibly.

Sino-American trade relations have to be set into their proper context; indeed, consideration of any economic issue at the present time must have reference to the fact that the global economy has never been so fragile. Globally political and economic leadership is constrained, as a result of the poor choices made at the micro and macro levels by both governments and peoples. Most recently the fact that there was any growth in the global economy at all was owing to China, every other major economy either skirted, or actually entered, recession. It seems that the erstwhile leaders of the global economy, the US, perhaps ourselves, are locked into high taxes, less so for the Americans, and low-growth, consequently Chinese trade policy can infringe WTO regulations without there being much that can be done about it. However, the reality, as we have seen, is more complex than those wishing to make political capital at the expense of their opponents in Congress either wish, or appreciate. China’s currency has appreciated, to an extent, Obama and Boehner have publicly opposed a position likely to antagonise China and bring on an unnecessary trade war, at a time when America and the global economy can ill afford it.

The Economist has been analysing the economic case for a Chinese revaluation, as well as the politics of the issue. However, its findings and perspective are quite different to the way that the issue is more commonly reported, as we shall see. The impact of inflation in China on its currency and export policies has been taken into account. It has been found that from early 2009 to July 2011 in nominal terms the yuan appreciated by just four percent – but by a far more robust 17 percent in real terms. The question as to whether any new, or accentuated, appreciation would provide some, or a substantial benefit has also been considered. Yuan appreciation was also placed within the context of wider Asian currency appreciation. Consideration of these factors sets the central issue into broader relief. Mindful as we are of that global uncertainty it makes the idea of risking a trade war for a minor benefit seem absurd.

The tribunes of the people in Congress, however, seem to be ignoring the more complex reality, in part, at least. Considering the Democrat’s loss of control of the House of Representatives last November, and reduced majority in the senate, in the face of a republican house leadership and executive branch broadly allied on the central matter, it seems most likely that the position of Reid and Schumer, et al, is “full of sound and fury, signifying nothing”. It will exercise some airtime, column inches, record, but the essential reality – no critical mass of opinion within the organs of American government favouring a crackdown, global economic fragility, Chinese policy being more nuanced than certain partisans aver, what actual affect American pressure would have on amending Chinese policy – seems to preclude any major upheaval. This is a matter best resolved by trade negotiators in some anteroom in Geneva, or discussed quietly by Chinese and American trade delegations in Beijing or Washington. A public flair-up as a result of congressional pressure with the likely obloquy and unintended outcomes that would ensue is something to be avoided; it seems the president and speaker appreciate this, and that the Chinese appreciate they appreciate this, shame about the Senate majority’s leadership.