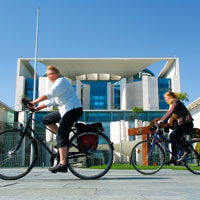 Sometimes choosing the right location for an event is very simple, because who needs to compromise if everything is possible in Berlin? The choice of special locations ranges from the 368-metre-high television tower to the hangar of former Tempelhof Airport, accommodating 5,000 guests. Europe’s most modern hotel landscape offers a unique diversity at favourable rates. To put it in a nutshell: the German capital convinces as a perfect meeting and convention host.

Berlin Convention Office
During the past ten years the visitBerlin Berlin Convention Office (BCO) of Berlin Tourismus & Kongress GmbH has offered competent support at the organisation of conventions, meetings and incentives. Customers benefit from the experienced team, a broad network of contacts and the free-of-charge agency and reservation services for hotel allotments.

Since the beginning of 2011 BCO has offered a completely revamped Internet presence on Berlin as an event metropolis. On www.convention.visitBerlin.de, Germany’s leading congress destination is presented in a comprehensive, structured and interactive manner. Event planners are provided, for instance, with ideas for framework programmes, participants get information on the tourism offering of Germany´s capital.

Berlin in numbers
The visitBerlin Berlin Convention Office is the initiator of the congress statistics launched in 2001 as a pilot project which has since provided sound data on the development of the meeting and convention market Berlin. On a half-yearly basis the data is collected and evaluated by an independent market research company and serves as a basis for future planning.

The specialised collection of all Berlin convention and meeting business data shows excellent event and participant numbers for 2010. More than 113,000 events took place in the metropolis on the River Spree (108,500 in 2009). They attracted 9.11 million guests to Berlin (8.26 million in 2009). The share of international visitors amounted to 20 percent. The Berlin meeting and convention market generated sales revenues of k1.65 billion in 2010. This corresponds to a ten percent increase compared to 2009.

Berlin’s hotel landscape convinces through an excellent service quality and high quality standards with a very good value-for-money ratio. This is particularly appreciated by meeting and convention participants. More than 5.5 million room nights from this group of Berlin guests were counted in 2010; this corresponds to an 11 percent increase versus the comparable prior year period. The role of the 170 meeting hotels of the German capital remains strong. Apart from their accommodation capacities, they represent 53 percent of all providers of event spaces. In 2010 a total of 95,000 events was staged ( up five percent) and a total of 5.5 million participants were catered for ( up 11 percent).

On a worldwide level Germany´s capital is amongst the four major locations for association meetings. This is confirmed by the statistics of the International Congress & Convention Association (ICCA) for 2009. With 129 events of international associations, the German capital moved up by one rank and left metropolises like Singapore (119) and Buenos Aires (90) behind. The leading destinations in the ranking are Vienna (160), Barcelona (135) and Paris (131).

Meeting and convention offerings continue to increase
Berlin is Germany’s meeting metropolis number one and one of the four major locations for association conventions worldwide. This is attributable to the excellent conditions which event organisers find in the German metropolis. Berlin boasts, for instance, the most modern hotel landscape in Europe. It has accommodated the needs of congress participants and constantly expands its offering.

With the opening of the Scandic Hotel on Potsdamer Platz Square, Nordic charm has conquered Berlin’s new centre. Since October 2010 the hotel has offered its guests 563 rooms, several restaurants and conference rooms with state-of-the-art equipment. Another focus is on “Green Meetings” and environmentally sound services. www.scandichotels.com. At the end of 2011, a breath of New York air will be wafting over Berlin. This is when the luxury Waldorf Astoria Group will be opening their first new-build hotel in Europe. This will be going up directly opposite the Kaiser Wilhelm Memorial Church, which means it will be located in the immediate vicinity of the Kurfürstendamm and the Zoological Garden.

The 31-storey Waldorf Astoria Berlin will feature 232 luxurious rooms and suites, a conference area covering more than 1,100 square metres and a lavish spa facility. It is the second hotel in the Hilton family to grace the German capital and is intended to supplement the facilities on offer at the Hilton Berlin, which lies four kilometres away. Visit www.waldorfastoria.com for more informaton.

Berlin: Future-proof event location
The German capital continues to gain in attractiveness as a location for large-scale events. By the end of 2013 a new congress and trade fair centre will be built on the site of the former Deutschland Halle. Between 2014 and 2016 it will replace the International Congress Centrum ICC Berlin, which will be completely closed and refurbished during that time. With the re-opening of the ICC Berlin, Messe Berlin will then have almost the double convention capacities. At present more than 530 events with around 240,000 participants per year take place in the congress area of Messe Berlin.

A decisive share in the future development of the flight services to and from Berlin will be accounted for by the new capital airport Berlin Brandenburg International BBI. It is currently built on the site of Schönefeld Airport. The latter will be replaced by the BBI Airport in the same way as Tegel Airport and the already closed Tempelhof Airport. The opening of the new airport is scheduled for June 3rd 2012. In addition, a shuttle service will be provided between BBI and the Berlin main station. It will take passengers every 20 minutes to both the airport and the city centre.

For more information, please visit us at www.convention.visitBerlin.de