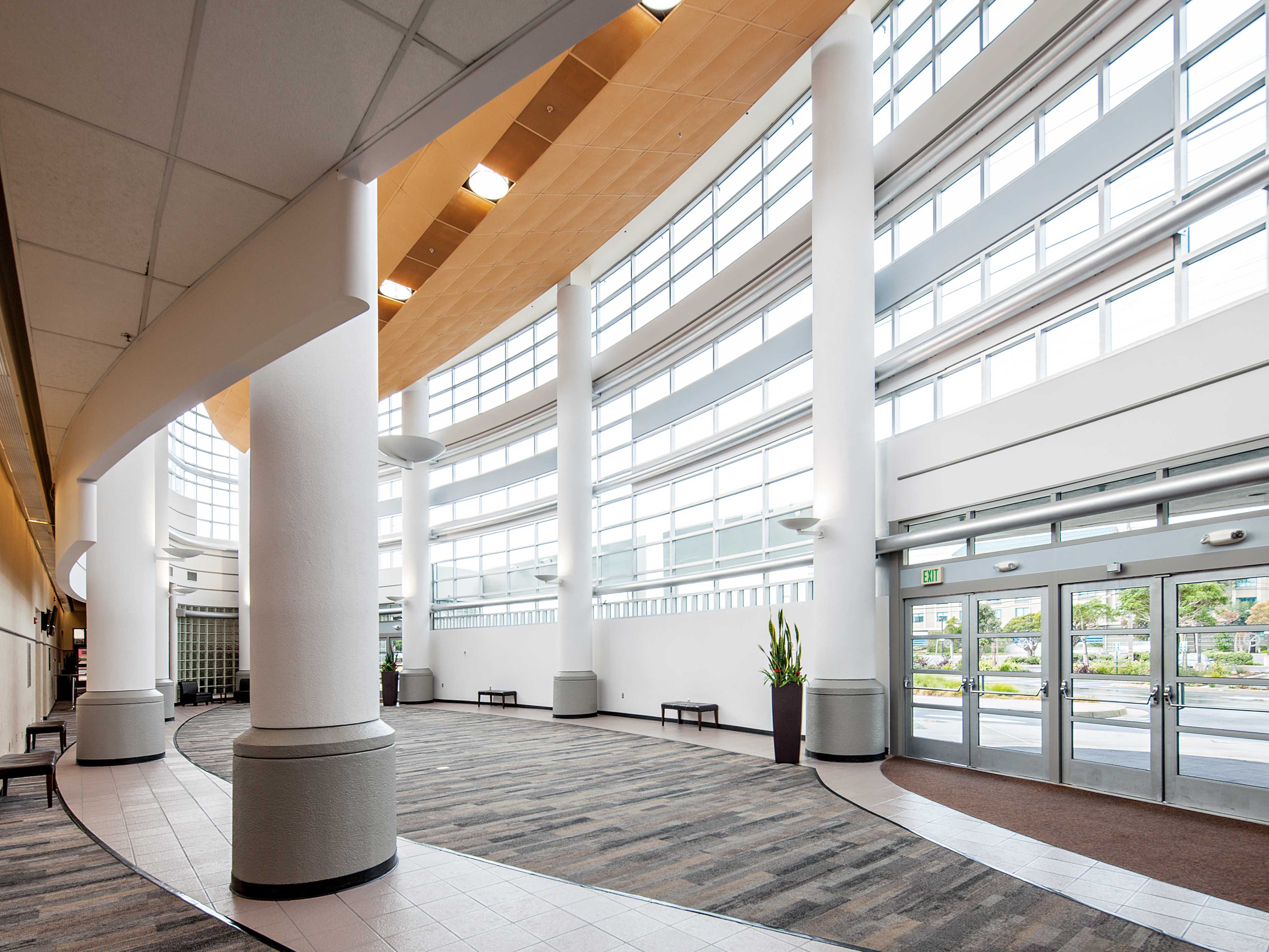 The centre boasts a range of facilities and technologies, including a dramatic and well-lit glass atrium, which serves as the perfect pre-function meeting location

Complimentary parking is available at the centre, as well as a free weekday shuttle to and from the South San Francisco BART station, CalTrain station and South San Francisco ferry terminal. In the area surrounding the centre, visitors have access to more than 3,000 hotel rooms and motel lodgings, making it the perfect destination for those guests arriving from out of state.

Equipped with some of the world’s most advanced business technology and a team possessing impressive local knowledge, it is unsurprising that the centre – an industry favourite when it comes to hosting world-class meetings and conferences – has been named Best Meetings and Conference Centre, North America in the 2017 Business Destinations Travel Awards.

Space to do business
One of the key drivers behind the centre’s ability to organise and host extraordinary events is its range of facilities and technologies. The centre boasts 20,500sq ft of flexible meeting space, including a dramatic and well-lit glass atrium, which serves as the perfect pre-function meeting location.
The centre also offers a further 3,600sq ft of pre-function space, which surrounds its magnificent ballroom. Moreover, the Grand Ballroom can be divided into as many as 10 meeting rooms, while the Baden Room can be halved or expanded with the addition of the Oyster Point Room. All meeting rooms are soundproofed and, uniquely, vehicles can enter the ballroom, creating the potential for motor shows and other innovative corporate displays.

Projection Presentation Technology has been the preferred in-house audio-visual provider for the centre since it opened in 1993. Audio systems for speakers, panels, musicians, video broadcasts and teleconferencing are all available, as well as atmospheric staging and professional theatrical lighting. The facility also features wireless internet access throughout, with high-speed fibre optic connectivity that can support even the most demanding client requirements.

The centre’s attentive team is always more than happy to assist with bookings, ranging from organising group accommodation to overseeing the set-up and running of crucial functions. Offering highly competitive rates for these top-quality services, including technical assistance and customised requests, the South San Francisco Conference Centre strives to ensure all its events run smoothly and successfully.

Recycle and revolutionise
Previously a warehouse, then a photo-processing lab, the building that currently houses the South San Francisco Conference Centre became an empty eyesore at one of the major entryways to the city before it was finally repurposed as a gleaming conference facility in 1993. This rehabilitation was the first of many moves to demonstrate the centre’s exceptional commitment to environmental sustainability. In November 2011, the South San Francisco Conference Centre became the first business in the region to earn the Bay Area Green Business Certification, while in 2015 it was awarded gold LEED certification from the US Green Building Council.

Equipped with some
of the world’s most advanced business
technology and a team possessing
impressive local knowledge, it is unsurprising
that the centre is an industry favourite

In addition to becoming a centre for environmentalism, in recent years, the South San Francisco area has also become a hub for biotechnology. The city’s central location provides several advantages for companies and individuals looking to improve their green credentials – for example, access to Stanford University, UC San Francisco and UC Berkeley, as well as its close proximity to a selection of influential Bay Area venture capitalists.

Three decades ago, industry leader Genentech began operating in South San Francisco with four employees and 2,000sq ft of office space, signalling the start of the city’s reputation as a centre for biotechnological innovation. Today, South San Francisco boasts nearly 15 research and development campuses and more than 8.5 million sq ft of laboratory, office and manufacturing space – numbers that even to this day continue to grow.

The city has also approved an additional three million sq ft of life-science-related development, which will be built and completed in the next 10 years, with yet more room to grow in the following years. With a stellar track record in helping companies move from their initial trial-and-error phase to a more focused long-term approach, the city prides itself on welcoming and nourishing start-up businesses.

Furthermore, the city has invested more than $250m in public works projects that will improve the business climate and quality of life for all residents in South San Francisco. Most recent projects include a water quality control plant, a newly constructed overpass and flyover at Oyster Point, improvements to the city’s sewerage system, and an extension to the BART transit system to and from San Francisco International Airport, which will help link visitors and commuters with the larger area’s highly skilled workforce.

With more than 62,000 people employed across various companies and industries, as well as in the world of academia, South San Francisco is one of North America’s unparalleled intellectual capitals. At present, more than 14,000 people work across 100 companies within the bioscience industry alone. According to the California Healthcare Institute, the Bay Area contains the highest concentration of biotech employees in the state.

More than business
San Francisco is also known for its cultural offerings. With the South San Francisco Conference Centre located only 15 minutes away from the city’s thriving centre, there are plenty of things to see and do in between meetings: world-class shopping facilities, sports, arts, botanical gardens and multicultural neighbourhoods are just a few of the attractions on offer from the city that is known internationally for its inclusivity, diversity and culture.

Additionally, the city’s outstanding culinary offerings are not to be missed. The city’s reputation for providing excellent food that is wide-ranging and caters for all tastes and cultures precedes it. The South San Francisco Conference Centre’s awareness of this citywide status has resulted in a keen interest in providing only the finest catering facilities for visitors: all food is prepared onsite and is made with the freshest ingredients across a selection of high-quality, organic dishes. Conference planners prepare individual menus for each event, including refreshments during breaks and hors d’oeuvres for more casual occasions.