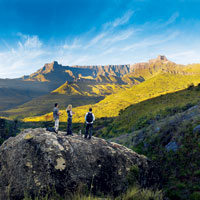 What makes South Africa a worthy destination for business travel?
Following the successes of hosting the 2010 FIFA World cup, it is clear that business tourism in South Africa has been bolstered by a new sense of energy and direction.  This all-important sector will continue to make a significant contribution to consolidating Africa’s position in the global arena and demonstrating our proven capabilities in terms of hosting international events.

Holistically, the 2010 FIFA World Cup was not an end in itself for the tourism sector, but a major milestone in the industry’s growth trajectory, which would lay a solid basis for a new decade of growth and development. Of all the legacies left by the successful hosting of the 2010 FIFA World Cup, the infrastructure legacy will remain the most beneficial for the business tourism sector as a whole. We have significantly improved ease of access and travel, increased accommodation options and also showcased our capability on developing world-class, award winning and sustainable infrastructural developments.

In terms of improved access and infrastructure, South Africa welcomed the first rapid rail link network in Africa in 2010, when the Gautrain became operational. The Gautrain averages about 50,000 train passengers per week and about 4,000 bus passengers through its integrated bus network. It offers a cost-effective, efficient, environmentally friendly and safe solution to the country’s business tourism transport needs. The first link of the Gautrain, between O.R. Tambo International Airport and Sandton, Johannesburg’s business hub, has been developed in line with other major global cities that link cities by rail to international airports.

South Africa’s tourism sector will be boosted significantly by the 200 international events confirmed to take place in the country over the next five years; yet further demonstration of the global appeal of South Africa as a business tourism destination. The events include meetings and conferences which are expected to attract about 300,000 delegates. The potential direct economic impact of these confirmed meetings and conferences is estimated at more than R1.6billion ($222m).

South Africa is proud to be the leading meetings, incentives, conferences and events host on the African continent. In 2011, amongst other conferences and meetings the country will host, South Africa will welcome the United Nations Climate Change Conference (COP17) as well as the 123rd International Olympic Committee (IOC) Annual Session (General Assembly).

What measures is South Africa Tourism taking to increase the region’s status as a business hub further?
SA Tourism long realised the need to identify a strategic platform that would truly showcase what South Africa has to offer to the international business tourism trade. Meetings Africa therefore was identified as a platform that can do just that. It is aimed at increasing and showcasing the region’s product offerings to those buyers specifically looking at Africa as their next destination. This event has been growing in the past few years, adding something innovative each year. Meetings Africa 2010 for example saw its first Associations Day aimed at enhancing our ability to bid for association meetings, which almost doubled attendance numbers this year compared to 2010. This year we enhanced the programme focussing on association management to make this event even more appealing to local associations.

Does South Africa Tourism focus its efforts on any particular city or area at the moment, and if so, why?
Our focus as South African Tourism is all of South Africa. We have the fortunate advantage that each of our nine provinces offers something unique and memorable to the business tourism traveller. Of course we have main cities which house the most convention infrastructure as I mentioned in the beginning, however, we always look for opportunities to drive delegates to other parts of South Africa to experience our wildlife, enjoy our open landscapes through a variety of exceptional options for tailor-made corporate incentive programmes and pre/post conference tour options that we are able to offer.

South Africa’s diverse offering for the business tourism market is further demonstrated by our array of product offerings specific to the incentives markets; providing memorable, value for money experiences that are not only world-class in their execution, but which come with a unique South Africa brand of warm, welcoming service.

In general, what are the biggest draw cards in the South African tourism market at the moment?
The development of the award-winning O.R. Tambo International Airport – voted as the best airport in Africa by the World Airport Awards 2011, is undoubtedly a huge draw card for the tourism industry. King Shaka International Airport, situated in the coastal town of Durban, fared well at the World Airport Awards 2011 too, being voted Best Regional Airport in Africa.  Our much improved airport infrastructure is further supported by an extensive high quality rail and road network as well as a huge variety of hotel and accommodation establishments across the board, allowing South Africa to come full circle in its offering to the global traveller. Our luxury rail products like the Blue Train or Rovos Rail are world renowned and extremely popular for exclusive corporate functions and incentive programmes.

Wildlife has always been a major attraction for South African tourism. Aside from the famous whale watching trips and shark diving excursions, are there any new initiatives to attract animal enthusiasts?
South Africa retains a global lead in wildlife and safari, and this has become in some instances the backbone of our offering to the animal enthusiast. However, there are many additional activities that are on offer, including volunteerism that will allow for an ever-closer experience with our wildlife.   Volunteerism is a globally coined concept created following the increase in demand for socially conscious tourism experiences, loosely based on the format of working holidays. South Africa’s volunteerism offerings also extend the general benefits of travel to lesser known, but highly regarded, South African destinations with the welcomed chance to assist with these communities’ socio-economic transformations and equally important issues such as wildlife protection. A good example of this volunteerism offering would be the Wildlife and Marine Volunteers programmes offered by All Africa Volunteers.

High-end retail in Cape Town and Johannesburg has flourished lately, with amazing flagship stores by the likes of Paul Smith springing up. How do you see the segment evolving? Might Cape Town become a shopping destination to rival the likes of New York and London?
One of South Africa’s unique propositions is rested on our ability to encompass many activities under the banner of lifestyle tourism – offering a selection of activities which fulfil the needs of those travellers looking to indulge in retail, music, culture or even art and design experiences. The recent developments in the retail sector support this strategy extensively, and are further driven by SA Tourism’s involvement in platforms such as the Johannesburg, Cape Town and Africa Fashion Weeks. Other major lifestyle events we promote include the design Indaba and the Cape Town International Jazz Festival. We are also reaching into global trending offerings such as Wine Tourism and Golf Tourism. This extensive lifestyle tourism offering captures our dynamism as a destination and offers a variety of supporting activities to the business traveller.

Over to sports: has your hosting of the last World Cup increased interest in the region, and if so, in what way? Might you even have attracted a new type of traveller?
Having been acknowledged by FIFA as the best ever and highest grossing World Cup host – securing more than $3.7 billion for the football body, as well as scoring an unprecedented nine out of ten for the tournament (highest score ever), South Africa has proven its capability as a global mega events destination that provides not only exceptional experiences to the fans and visitors, but has demonstrated its ability to be financially viable as well. Total awareness of South Africa as a leisure destination increased by nine percent following the world cup, and the intention to visit South Africa in the short term increased by a significant 35 percent.

Thus, the World Cup has assisted us in propelling our mega-events proposition, which feeds off the same infrastructural legacies mentioned previously. We have already begun to see the benefits of this newly developed sector of our tourism offering, following the announcement of South Africa as the chosen venue for the World Golf Championships in 2012.

How will you cultivate South Africa’s budding sports status, if at all?
South Africa’s ability to host mega-events has been proven on many occasions and is not limited to our successful hosting of the 2010 FIFA World Cup.  Even on short-notice, we have welcomed the world to experience our unique South African welcome and capability for events ranging from the IPL Premier League in 2009, international music concerts and events, the FIFA Confederations Cup 2009™, British and Irish Lions Tour etc.  In just 15 years, South Africa secured and successfully hosted a triple-whammy of sporting events – the Cricket, Rugby and Football World Cups, breaking records in the process as our nearest competitor, the UK.

How important is the annually held conference, Meetings Africa, to the future growth of tourism in South Africa?
South African Tourism acquired Meetings Africa in 2007 as part of our strategic development to grow business tourism. It is aimed at showcasing what South Africa has to offer. Over the years, it has steadily become a valuable and focused extension of our central growth strategy for the sector. As the only MICE exhibition in Southern Africa, it is an incredibly powerful platform to raise the region’s profile as a quality incentive and conference destination. The growing stature of the Meetings Africa platform is demonstrating the mounting interest in our destination as the gateway to Africa in terms of trade and investment; a position which is set to be further entrenched following our integration into the BRICS economic coalition.