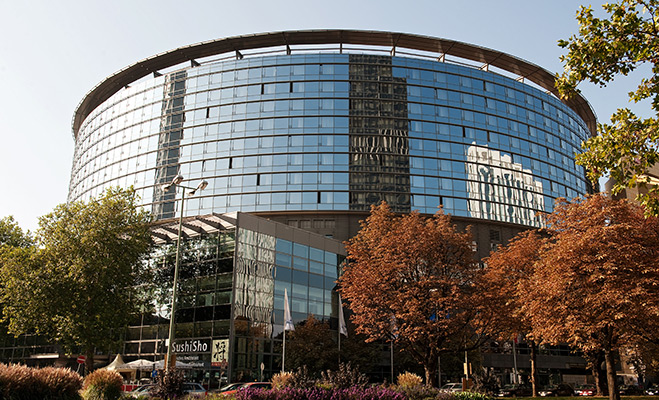 The Congress Center Messe Frankfurt offers space for a total of 3,400 guests in 14 conference halls. Opened in 1996, it has quickly established itself as a leading venue for all types of congresses and conventions. Behind the eye-catching glass façade lies its centrepiece: the multi-functional ‘Harmonie Hall’, which provides room for up to 2,200 guests.

This space can be transformed into a tiered auditorium, with flexible adjustable walls that allow for a wide range of floor plans to meet every need. On the three event levels, there are 13 additional flexibly configurable conference rooms, two spacious foyers filled with daylight, offices and a VIP lounge.

Future-oriented project
To meet the growing demand for conference and congress facilities, Messe Frankfurt is expanding its range of products and services. The new Kap Europa congress building is under construction in the neighbourhood of the exhibition grounds. As of summer 2014, this will provide additional conference halls and space for events and activities.

Once completed Kap Europa will offer 7,700sq m of space, including a hall large enough for 1,000 people, a divisible room for 600 people and 12 additional conference rooms, with space for a total of 2,400 guests. The spacious foyers, filled with abundant natural light and set over five levels, feature spectacular views of Frankfurt and the nearby Skyline Plaza shopping centre. With its striking shape, Kap Europa is a solid construction of reinforced concrete, 33 metres high.

Both the construction and operation of this new structure meet strict sustainability standards. In October 2012 – before the construction project was even completed – the Kap Europa received a pre-certificate in gold from the German Sustainable Building Council (DGNB) for its high environmental standards. This is the first event building that has ever received this sort of pre-certification.

As the first German trade fair organiser to join the UN Global Compact, Messe Frankfurt has officially demonstrated its commitment to Corporate Social Responsibility (CSR) since 2010. Its economic, environmental and social dedication is reflected in many ways during daily operations, including active and resource-conscious energy monitoring, the installation of photovoltaic systems on the roofs of Hall 10, and the multi-storey car park.

It uses FSC-certified paper for printed matter, combined admission tickets for exhibitors and trade fair visitors for using local public transport free of charge as well as many other initiatives.

Congress Frankfurt – a department of Messe Frankfurt – is the service provider of choice for congress organisers looking to take advantage of the wide range of venues on the Frankfurt exhibition grounds and the new location Kap Europa. In addition to the Congress Center, there is also the historic Festhalle, the futuristic Forum, the Portalhaus and diverse exhibition halls.

There are a total of 80 congress and conference rooms with a capacity for 22,000 visitors, as well as spacious exhibition areas. As of 2014, this will be supplemented by the Kap Europa congress building in the adjacent Europaviertel district.

Another advantage of this international venue is Frankfurt’s extensive hotel capacity − perfect for delegates attending longer events. The four-star Maritim Hotel is directly linked to the Congress Center and offers over 500 rooms. Visitors can choose from over 5,200 hotel rooms within walking distance of the Messe Frankfurt exhibition grounds, which can enormously reduce the need for shuttle services.

The central location of the Congress Center – right in the heart of the city – also makes it a breeze to reach. The Congress Center Messe Frankfurt is only 15 minutes by taxi from Europe’s second-largest airport, where 101 airlines annually fly 56.4 million passengers to 264 destinations in 113 countries. Furthermore, Germany’s busiest railway station is within walking distance of the exhibition grounds. Over 350,000 passengers pass through this rail hub every day. Together with the Frankfurt motorway junction, the Congress Center can be easily reached from anywhere in the world.

In 2012, Messe Frankfurt served as a venue for 76 major congresses and meetings, attracting a total of 112,000 participants. These events focus on diverse topics and key areas of interest, the most important sectors include science, medicine, IT and finance.
Among the key events in 2012 were HP Discover EMEA for the IT industry, ECOMM – European Conference on Mobility Management, Euro Finance Week 2012 and the 57th International Congress of Hearing Aid Acousticians for experts in medical technology.

An attractive convention site
Frankfurt was once the site of imperial coronations, but today the city has developed to become one of Europe’s leading financial and business locations. Around 100 high-rise buildings tower over the city centre as a symbol of economic growth. Thanks to its skyline, which is unique in the whole of Germany, Frankfurt has been unofficially named ‘Mainhattan’ (a portmanteau of the local Main River and Manhattan). Its skyscrapers form a contrast to the historic Römer Town Hall, the Goethe House, the old opera house, St Paul’s Church and the Imperial Cathedral.

Frankfurt’s central location, outstanding infrastructure and international diversity make it a natural choice for congresses, conventions and events. According to the 2011 Meeting and Event Barometer, the Frankfurt Rhine-Main region is the second most popular area for congresses in Germany – right behind Berlin. What’s more, this city in the heart of Europe offers both traditional and modern attractions, with an exciting mixture of skyscrapers and old half-timbered houses, apple wine and sushi, high-powered business and a relaxed attitude.

For over 800 years, Frankfurt has been well known for its trade fairs. Messe Frankfurt extends over an area of 578,000sq m, making it the world’s second-largest exhibition grounds. With its spacious facilities, Messe Frankfurt features 355,678sq m of dedicated exhibition space. Centuries of hosting trade fairs have shaped the city’s cosmopolitan outlook and renowned hospitality.