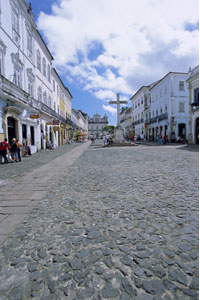 Few people know a lot about Salvador, so it’s best to start with the basics. First – and confusingly – it’s called ‘Bahia’ by the locals, the name of the state of which Salvador is the capital. It sits on the north east coast and is considered a gateway into northern Brazil. For a time, under Portuguese rule, it was the capital of the country. It’s the third most populous city in Brazil and the second most popular tourist destination, yet a straw poll of my colleagues suggests that unless you have been there or are planning to go, then you won’t have heard of the place. Dry facts and straw polls don’t really address Salvador’s redeeming features, however, as it is a unique, incredible place.

Brazil’s often brutal history is more evident in Salvador than in any other city in the country. Before slavery was abolished in 1888, 1.3 million slaves were imported into Brazil – double the number shipped to the US – and 80 percent of the population of Salvador is black. The heritage of the African slaves has been well preserved, and is clearly evident in what the locals eat, what they wear and who they worship, as well as the sights and sounds of the city. Arguably this is the real Brazil, and it’s a Brazil well worth visiting.

A historical hub
Bahia is divided into the upper city (cidade alta) and the lower (cidade baixa) and you can choose to either schlep between the two on foot or take the marvellous Elevador Lacerda: an air conditioned lift with breathtaking views over the city that costs just a few pence. Few visitors will leave without at least catching a glimpse of Salvador’s two most well known neighbourhoods – Pelourinho and Barra. The latter is famous for its selection of hotels and excellent beaches, while Pelourinho boasts stunning colonial architecture, a throwback to when Bahia was the economic powerhouse of Brazil.

Although the buildings are wonderful to appreciate (Pelourinho is a Unesco World Heritage Site) visitors should also appreciate that this neighbourhood hasn’t quite made the transformation from the drug and crime ridden red light district that it was in the 1980s to the tourist mecca it appears to be today. Parts of Pelourinho are still sketchy and although it’s been prettied up and there is a constant visible police presence, it’s a good idea to be on your guard. A simple rule of thumb is to avoid unlit alleyways at night and rely on your instinct: if somewhere feels unsafe, then it probably is. Another word of advice is to act like the locals. Look as if you know where you are going, even if you don’t. Wear little or no jewellery and leave the Rolex in the hotel safe. Carry a camera that you would be prepared to lose, and be careful taking money from cash machines. Overall though, have a good time; the vast majority of visitors to Bahia leave without developing any scars more serious than a caipirinha hangover or a nasty case of sunburn. Indeed, I have spoken to a number of former residents of Sao Paolo and Rio who moved to Salvador to escape high crime rates.

Belongings can often be snatched on the beach, so again it’s best to behave as Brazilian as possible. Don’t take very much, because apart from trunks, flip-flops, a towel and a few reis for an ice-cream or a beer, you won’t need it. The beaches here are precisely what you might expect: ridiculously talented kids kicking around footballs, men swaggering up and down in revealing trunks and women in even more revealing bikinis, watersports, ice-cream sellers and some of the most impressive coastline in South America. The Porto de Barra was considered the third best beach in the world by the Guardian a couple of years ago and it’s easy to see why – the water is clean and calm, the people friendly and the sunsets, because the beach is west facing, among the most spectacular on the continent. Other beaches worth having a look at include Piata and Itapua, though to be honest you won’t struggle to find somewhere to laze around for a few days: Salvador is blessed with over 40km of mostly impressive beaches.
Party paradise
It’s practically impossibly to write about Brazil without mentioning carnival: the time of year when hundreds of thousands of people take to the streets, hell bent on spending weeks drinking and dancing, followed by a few days when, for a change of pace, they spend drinking and dancing until they fall over.

Rio de Janeiro is renowned as having the biggest and best carnival in the land, encompassing 700m of street and impressive stands and floats. But there’s a slight problem: although truly impressive, Rio’s carnival is dwarfed by Salvador’s, in terms of size (some two million people celebrate over 25km of the city) and the hedonism involved. Officially Salvador’s 2010 Carnival starts on 11 February and runs to 16 February. In reality, it lasts much longer and there are sporadic parties throughout the carnival season, running more or less between December and March.

Of course, such partying can take its toll on mind and body, but there’s plenty of nourishment to keep both together, including the excellent street food (from bean and shrimp fritters, to acarje – essentially a deep fried bread) and restorative cocktails (my favourite being Capetas – literally, ‘little devils’ – made with chocolate, ground peanuts, condensed milk, a healthy slug of vodka and the plant stimulant guarana).

One tradition you’re likely to encounter when visiting Salvador around carnival time (or any time, to be honest) is Capoeira. Fusing martial arts and dance, this Afro-Brazilian art form is thought to have originated in the plantations as a way of keeping fit and being ready to fight, without the actual intentions being too overt. Whatever its origins, Capoeira is impressive stuff, incorporating sweeps, kicks, headbutts and throws in its dazzling whirl. It’s practised in the streets and in squares – bear in mind that watchers are expected to tip – and travellers can train with local groups. Among the best is Mestre Bamba’s academy in Pelourinho: for a couple of pounds a day you can train with the locals and take home a skill with which you can impress your friends and colleagues.

The beadier-eyed will have noticed something by now: that this all seems a bit tiring. The Capoeira, carnival, drinking, and football on the beach all sound like fun, but where the hell do I sleep after it all? The Casa do Amarelindo is where. Located centrally in historic Pelourinho, this charming, personal hotel is about the best Salvador has to offer. The service is great, it’s clean and stylish and has a breathtaking view from the rooftop lounge. The food in the restaurant isn’t too shabby either and it’s very reasonably priced. Other places recommended to lay your head at night include the Pousada Casa Vila Bela, Aram Yami, and the Bahiacafe hotel. But be warned: the prices, much like the atmosphere, go crazy at carnival time.