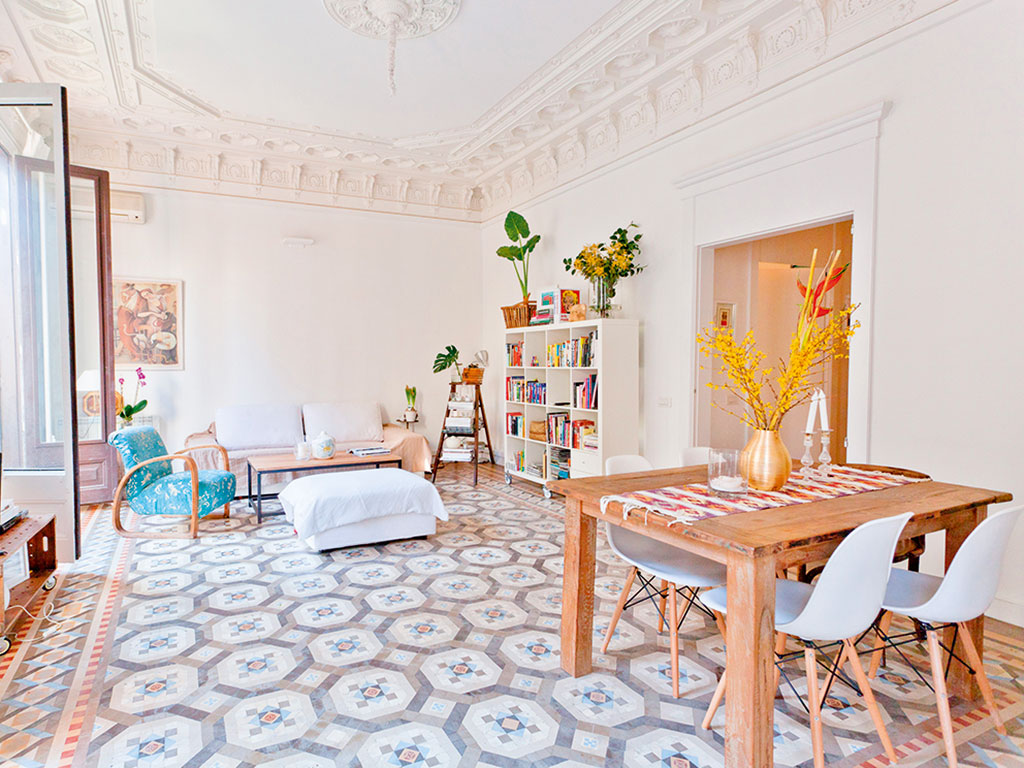 Sunny Modernist House, Barcelona Spain is just one of the attractive locations you can stay at with Airbnb

Strapped of the cash to keep hold of their San Francisco apartment, roommates Brian Chesky and Joe Gebbia offered an impromptu bed and breakfast service to any takers in a desperate last-ditch attempt to make ends meet. This side-earner would become Airbnb: tourism industry giant and poster child of the sharing economy.

Casa Caracol, Islan Mujeres, Mexico
The Casa Caracol, or Seashell House, was built in the 1990s by architect Eduardo Ocampo and his artist brother Octavio. Inspired by their island setting, they constructed a seashell house. Inside the them continues – from the spiral staircase to seashell headboards and water-emitting shells.
Sleeps: 7
Costs: from £143/night
Extras: Private pool

The Owl House, Sandhills, UK
The cosy little Owl House is an eco-build on the west coast of England. A carefully decorated exterior and strategically placed portal windows create the feathered creature’s face. The house is close to Anthony Gormley’s Another Place sculptures, and only twenty minutes from Liverpool.
Sleeps: 2
Costs: from £80/night
Extras: Sea views

Since its humble beginnings in 2008, which saw Harvard graduate Nathan Blecharczyk join as the third co-founder, accommodation rental business Airbnb has rocketed to stratospheric success. Having grown from a few airbeds on an unused floor to an industry powerhouse, the company reportedly takes a booking every two seconds and boasts in excess of 500,000 listings in over 33,000 cities.

The most confounding facet of all is that millions of hosts are willing to open their homes to people they have never met. It’s a concept that defies the age-old lesson of ‘don’t trust strangers’ and one that marks a milestone change in consumer behaviour.

While many businesses are keen to flaunt their ‘customer comes first’ mentality, few have gone so far as Airbnb in putting the customer at the heart of their operations. The only thing certifying the trustworthiness of an Airbnb member is a customer review. Both guests and hosts are judged by the feedback they’ve received.

Airbnb’s innovative business model is one born of the sharing economy, at a time when reputations are made as easily as they’re broken by online opinions – and lots of them. Like so many social media sites before it, Airbnb is entirely self-regulated, and though this approach has proven successful on the whole, lessons have been learnt along the way.

Putting customers first
Controversy reached a head in 2011 when a San Francisco resident and Airbnb host ‘EJ’ wrote of how her apartment was ransacked and her identification documents stolen, courtesy of an Airbnb-approved guest: “They smashed a hole through a locked closet door, and found the passport, cash, credit card and grandmother’s jewellery I had hidden inside. They took my camera, my iPod, an old laptop, and my external backup drive filled with photos, journals… my entire life. They found my birth certificate and social security card, which I believe they photocopied – using the printer/copier I kindly left out for my guests’ use. They rifled through all my drawers, wore my shoes and clothes, and left my clothing crumpled up in a pile. They found my coupons for Bed Bath & Beyond and used the discount, along with my Mastercard, to shop online.”

The post quickly proceeded to circulate the blogosphere, drawing widespread criticism of Airbnb, who reportedly took more than 14 hours to respond. Since this incident however, Airbnb has declared its mission to offer unparalleled customer service and set a higher precedent for outstanding customer care in its continued operations. The company now provides a £600,000 insurance guarantee to each of its hosts, employs a staff of 50 investigative agents to track down abusive guests, and a dedicated support line is available in 30 different languages.

The company has gone to great lengths to overturn the bad publicity from this case, going above and beyond to reassure its 8.5 million guests and 500,000 hosts. When Adam Jackson tweeted that a guest had stolen his pizza cutter, Airbnb promptly shipped him a new one; when Jessica Dowdy tweeted that she had booked with Airbnb to see Pearl Jam in Seattle, the company shipped her a band t-shirt in time for the show; and when a host cancelled a cottage booking for a bride-to-be and her bridesmaids on the eve of her wedding, Airbnb sent the guests $1,000 in credit to book a replacement.

The company’s dedication to improving customer standards is also seen in its recent appointment of Chip Conley as head of global hospitality. Conley, who founded boutique hotel company Joie de Vivre, has been charged with improving guest experience. He wrote recently: “I became a boutique hotelier because I wanted to shake up the conventional wisdom that, in order to offer quality, hospitality had to be conventional. Nearly 30 years later, Airbnb is now on the forefront of a new type innovation built from the same components: meaningful host connections, great design and local experiences.”

“Hospitality is at the very heart of what we do at Airbnb,” wrote Airbnb CEO, Brian Chesky. “When people think about the meaningful experiences they’ve had through Airbnb, their hosts’ warm welcome or thoughtful gestures are always at the core. No one in the industry is better qualified than Chip to help our hosts redefine hospitality.”

An uncommercial model
However, as Airbnb continues to expand it faces challenges unique to its business model. The primary draw of Airbnb – aside from cost – is an experience entirely unlike an impersonal hotel, offering the opportunity to ‘live like a local’. Its therefore important that Airbnb makes every effort to ensure it does not detract from the individual essence of each host and to also maintain a sense of sincerity in all they do.

Above all, the success of Airbnb is owed to its focus on personalisation. The company’s culture is firmly rooted in its social, start-up mentality – the same mentality that allows guests to advertise their properties however they please and guests to recommend whichever accommodation they prefer. A private Palm Springs retreat, an ‘Owl House’ with sea view, a 70-bedroom former school, and a Highlands castle are listed side-by-side and are united not by price but by a lifestyle – one that embraces difference and does not discriminate against the weird, the wonderful and the outright unaffordable.

Airbnb’s unusual decision to abide by a distinctly uncommercial business model, however, is in keeping with its best interests. By placing the power in the customers’ hands, Airbnb ensures that the system remains one invested in people as opposed to places, fostering an attitude of open-mindedness and encouraging guests to invest in their host’s life wherever possible.

The sharing economy
The company has profited from the rise of a collaborative economy, a shift that has seen multiple businesses sharing goods, data and services with unprecedented degrees of success. The availability of data and the ease with which consumers can make their opinions known via the internet has played into the hands of Airbnb’s success, with the sharing economy gaining ground in troubling economic circumstances.

The concept is being touted by many as the future of consumption, and debased by others for impacting on its conventional economic counterparts. Authorities in Amsterdam have used Airbnb as a primary source in clamping down on ‘illegal hotels’, whereas recent New York laws legislate that letting an apartment for less than 30 days is illegal, implicating thousands of Airbnb users in the crime. However, restrictions such as these impact on a relatively small slice of the pie, and have not yet curbed Airbnb’s impressive growth.

The peer-to-peer marketplace is in the process of comprehensive change at present, with platforms such as eBay and Airbnb breeding an entirely new ecosystem of traders. The question remains as to what extent the sharing economy has harmed its conventional counterparts, but with the high street falling out of favour and an increasing number of businesses falling short of technological advances, the future of consumption may well lie with a new age of inter-consumer collaboration.