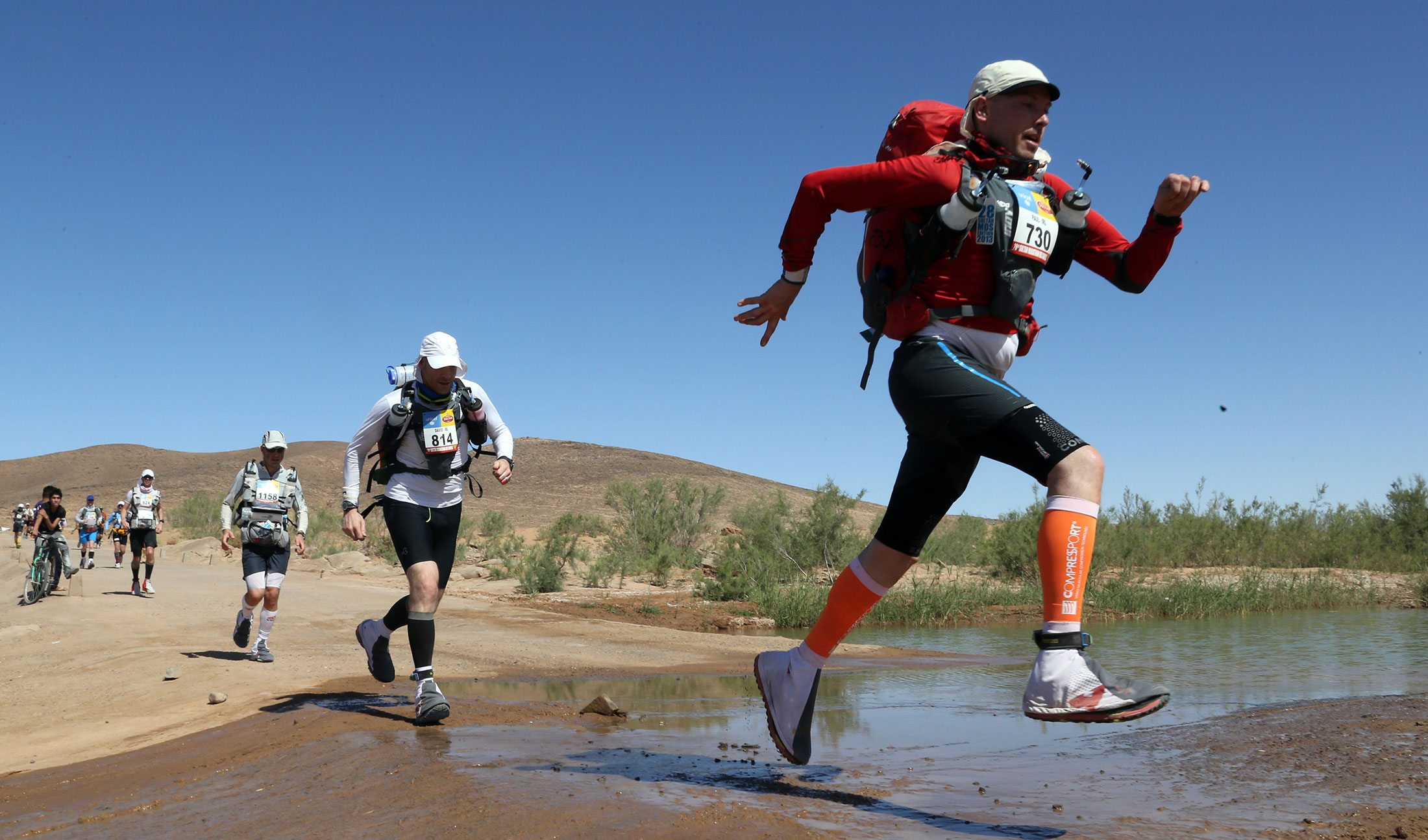 Competitors during the first stage of the 28th Marathon des Sables. The ultramarathon is the equivalent of five and a half marathons and takes place in the world’s largest desert

There is arguably no other climate worse suited to the human race than that of the Sahara Desert. However, aside from occupying 10 percent of the African continent’s landmass and ranking as the world’s largest and most unforgiving hot desert, the Sahara is also home to the start and finish line of the Marathon des Sables. With the distinction of being ‘the toughest footrace on earth’, every year thousands flock to the event, all for the privilege of putting themselves through untold measures of physical and mental exertion.

The popularity of the Marathon des Sables is – believe it or not – representative of greater participation in the so-called ultramarathon space; defined as any race longer than a traditional 26.219-mile marathon. Although the event at first glance appears fitting only for the uppermost bracket of elite runners, thousands of individuals across the globe – amateur and professional alike – are partaking in ultramarathons much like it.

“Ultra running to me is more than just racing against thousands of people – much like your big city marathons. Instead, most of the time the battle is against the elements, terrain and, the biggest factor, the mind,” says Nick Furlow, an experienced ultra runner and founder of Wrun.co.uk. “This journey and the fact that the competitive element of time is almost completely lost in the ultra running forum and geared more towards which races you have completed is why I think it is a big draw to people and is ever increasing in popularity.”

Surprisingly, some consider ultramarathons to be easier even than standard marathons, given that they take place on more varied terrain and that the challenge, rather than finishing in as fast a time as possible, is to merely complete the course. Whereas regular marathons demand that participants put themselves through 26 plus miles of unforgiving tarmac, a softer, more irregular ultramarathon track places less stress on your joints. What’s more, whereas walking in a marathon triggers encouragements from the watching crowd to ‘keep going’, walking in an ultramarathon is something everyone competing must come to terms with. Without going into any great depth, ultramarathons are an entirely different kind of beast.

Another of the key differences between ultramarathons and shorter distance events is the social aspect, and many competitors maintain that they’ve formed lifelong friendships with fellow runners over the course of a race. It’s an event that few get through without shedding a tear or two, and one that pushes your mental and physical strength to the limit – so what better way to take it on than with a companion at your side.

“The social aspect of ultra running seems to be a friendlier one because the competitive element isn’t really there, and you know fellow runners are out there for the sheer love of the sport. Having ticked off distances up to ultra, I find that the bigger the distance the bigger the social interaction before, during and after the event,” says Furlow. “Because of the lack of huge prize pots within the ultra running circuit you also know that the pros are there for the challenge as well, and not necessarily the big cheque at the end.”

The strong social aspect of an ultramarathon has attracted an increasing number of group participants, not least those in corporate teams choosing to represent their office on the racetrack. Increased interest from businesses has even prompted many events to put together corporate-specific packages, all in an effort to reel in bigger crowds and up the ante.

Below we take a look at some of the best events on the ultramarathon calendar, ranging from the icy peaks of Mont Blanc to the thick foliage of the Peruvian jungle.

Marathon des Sables
The Marathon des Sables (MdS) is the go-to ultramarathon for those looking to make a name for themselves on the circuit. Demand for places is incredibly high and the waiting list can stretch well beyond a year. Founded in 1986 by Patrick Bauer, the race has run every year now for 28, and its renown has been on the rise ever since. The MdS even has its own foundation, Solidarite, through which participants have contributed to those living in local communities and improved their quality of life.

According to the race website: “You will experience something unique, something you will never forget. You will make lifelong friends. You will push your mind and body to the limit. You will find things out about yourself. And in all likelihood you’ll get kissed (twice!) by a Frenchman.”

However, despite its reputation as the “toughest footrace on earth”, the competition is considered by some in the ultramarathon community as undeserving of its reputation, with many maintaining that it is far from the toughest on the circuit. Nonetheless, the bragging rights that come with conquering the world’s largest desert through temperatures of over 50 degrees centigrade are more than enough to bring thousands to the site year after year.

Jungle Ultra
The iconic Jungle Ultra takes place over five stages and covers 230km of winding jungle trails, lofty mountain paths and little-known village tracks. Competitors must descend on foot 10,500 feet from Peru’s Cloud Forest to the Amazon Jungle, with a time limit of six days to complete the course in its entirety. The event asks that participants carry everything they need for the duration of the race, including a hammock, sleeping bag, food and water.

The Jungle Ultra is only one of a long list of ultramarathons set in the jungle, however, according to the race site, “no other Jungle Ultra marathon comes close to the Jungle Ultra.” Humidity levels can reach close to 100 percent, leaving competitors saturated for long periods of time, whilst the unforgiving terrain gives participants little to no respite throughout.

The race is one of four ultramarathons put on by organisers Beyond the Ultimate, with the others – Nepal’s Mountain Ultra, Namibia’s Desert Ultra and Sweden’s Ice Ultra – representing similarly impressive challenges. The race site warns that “whether you are in it to win or finish, these footraces will test you in ways you never thought possible – expect the unexpected.”

Grand to Grand Ultra
The first and only self-supported footrace to grace America, the Grand to Grand Ultra (G2G) begins at the North Rim of the Grand Canyon and takes competitors 167 miles onwards and 9,342ft upwards to the top of the Pink Cliffs of Utah’s Grand Staircase. Participants tackle the course over six stages, each taking them through red rock canyons and some of the more remote regions of continental America.

“The Grand to Grand Ultra is the culmination of our vision to create a world class stage event in North America,” says the race site. “We searched high and low for the most iconic course possible on a continent that offers a plethora of unsurpassed beauty. It was the unique opportunity to organize an event that would stretch from the Grand Canyon, one of the Seven Natural Wonders of the World, to the relatively unknown but equally geologically iconic Grand Staircase, that settled the location.”

Run by a range of ultramarathon and event management talent, the team’s ambition is to create a world-class event, and, at the same time, contribute to those in the local community while also preserving the local environment.

Montane Spine Race
Britain’s toughest endurance race sees participants take on a non-stop 269-mile track at the height of winter and over the course of only seven days. First attempted in 2012, the race was completed by only three of 11 individuals. Beginning in Edale, Derbyshire, the route takes runners through the Peak District, the Yorkshire Dales and Northumberland National Park, eventually finishing up at the Scottish Borders.

Taking place in January, only the most courageous of competitors are capable of enduring the crippling mental and physical demands of the course. The current record of 110h 45m was set in 2014 by Pavel Paloncy as part of what is widely regarded as one of the most impressive feats of endurance yet witnessed in the UK.

Race finisher Mark Caldwell describes the event: “The Spine Race is easy, apart from it’s dark most of the time; your feet, then body, will fall apart; the compulsory baggage doesn’t get any lighter; sleep is a luxury; you experience extremes of weather and cold; and finally of course it’s 268 miles long. Many will try to break the Spine but most will become race statistics.”

Ultra-Trail du Mont-Blanc
2,300 participants gather every year in August to complete a 168km course, throughout which they’ll climb 9,600 metres and pass through France, Italy and Switzerland. Since the inaugural race in 2003 it has been called the “race of all the superlatives”, with the competition open only to those with the requisite number of qualification points. Maximum race time is 46 hours, though the first finishers usually clock in at an impressive 20 hours.

Following the Tour du Mont Blanc hiking path, the route usually takes walkers seven to nine days to complete, although the exclusivity associated with the event means that participants are capable of completing the course in only a fraction of the time. Regarded by many as the single most challenging ultramarathon in Europe, the event, nonetheless, is filled to capacity every year, having expanded its quota from 700 to more than 2,000 to facilitate soaring demand.

The Tour du Mon Blanc is today made up of five ultramarathons, with the Ultra-Trail du Mont Blanc (UTMB) being the biggest of them all. The other four are either smaller in scale or encompass more technical challenges, not least the Courmayeur-Champex-Chamonix, or “the little one”, which takes runners on a 101km track and a 6,100m climb.