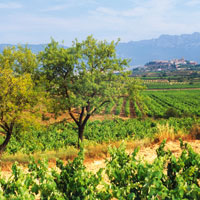 Spain produces an extraordinary amount of wine each year and growers have significantly refined the production process as well as the quality of the wine itself. However, before the end of the 19th century, Spain was actually known for cheap, tasteless wine that didn’t offer much for the serious oenophile. But all of that changed after Phylloxera, a small insect related to an aphid, invaded the vineyards of France in the late 1800s devastating crops and causing merchants to turn toward Spain for wine production. Classic Bordeaux-style techniques such as barrel aging and de-stemming were introduced and today the country is known for producing some of the world’s finest wine.

The Rioja district produces perhaps the finest quality of wine and has been deemed one of the greatest winemaking regions in all of Spain. Located in the northern portion of the country and situated in the valley of the river Ebro, Rioja contains sub-regions that are known as Rioja Alta, Rioja Alavesa, and Rioja Baja. Red varieties of the famed wine produced in Rioja are known as tempranillo, garnacha tinta, graciano, and mazuelo. Rioja is also renowned for its selection of white wines such as viurna, garnacha blanca, and malvasia.

Regional personality
Another region of Spain famous for its production of amazing wine is Ribera del Duero. With moderate rainfall, dry summers, and a high altitude, this area nestled along the northern portion of the Iberian Peninsula creates a full-bodied wine that offers a distinctly rich, fruity taste. The small region of Cigales has long been associated with aromatic rose wines but producers have recently begun to show an interest in creating red wines as well.

This region has been compared to Ribera del Duero and experiences moderate to low rainfall, dry, hot summers and harsh winters. Other portions of Spain famous for their wines and vineyards are Castilla Y Leon, Requena, Bierzo, Jumilla and Rias Baixas, located in the north-western most corner of the country. Navarra is also situated in northern Spain and was previously known only for its output of rose wines until the last few decades when its red wine production increased dramatically.

There are several terms listed on wine labels that are produced in these regions which indicate the length of time as well as how the wine may have been aged. One of these terms is bodega, which is the Spanish word for a winery, or it can also mean an above ground storage place for wine. Cava, Spanish for cellar, is another word commonly seen on wine labels and it may refer to sparkling wine as well. If crianza appears on a label it means that the wine has been aged using oak, and alternately, sin crianza indicates that it has never been aged in oak before the bottling process.

Sherry from Spain is also excellent, and although this fortified wine from Andalusia has largely been forgotten, their flavour spectrum is enormous. Manzanillas and Finos are pale, dry and delicate despite their 15 degrees of alcohol; drunk well-chilled, they are delicious aperitifs. Amontillados, an old favourite with more age and alcohol, can be redolent of walnuts and honey, and are made both sweet and dry. Finally, the best dessert Sherries, made largely from super sweet Pedro Ximenez grapes, resemble prune syrup transformed into nectar.