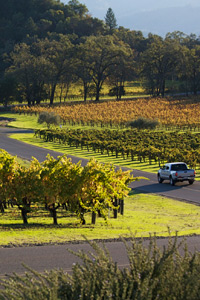 Carbon off-setting is a subject that has many businesses and business travel specialists coughing nervously into their complimentary take-off drink. According to a recent survey, the number of business flights made by British business people in 2003 was 3.43 million, meaning an average of 285,833 flights per month. Airlines are setting up various carbon off-setting schemes (Virgin Atlantic, for example, plans to run trial flights of a biofuel-powered Boeing jumbo jet next year), and we can all pay a little more on our tickets to help green initiatives.

But why stop there? Many airlines are asking that their wine be supplied in lighter glass bottles, or other recyclable materials to help lighten the load. Alongside this, an increasing number of vineyards are also looking at limiting their impact on the environment, whether by offsetting their emissions, using less chemical products, using horses in the vineyard instead of machines or putting their wine in recycled packaging materials. The wine industry is hardly the world’s worst culprit, and the carbon dioxide produced during fermentation isn’t exactly up there with pollution from factories along the Yangtze that saw off the Chinese river dolphin, but all these things go towards redressing the balance – and we can help by paying attention to greener producers.

Girolate 3rd Vintage (2003), Despagne Family Vineyards, Bordeaux (approx £40)
This wine is exceptional by pretty much any standard. Its merlot fruit is rich and smooth, with intense layers of chocolate and coffee, and its tannins seem to have performed the amazing trick of being both powerful but invisible, a bit like the voiceover in Desperate Housewives. But not content with creating a wine that far exceeds the expectations of the appellation, the Despagne family has instigated a programme for biofuel and recyling in an attempt to create a carbon neutral vineyard, the first one in Bordeaux. The family has replaced unproductive vines with sunflowers destined for biofuels – with the secondary side effect of ensuring that grapes from any lesser vines are kept out of the bottle.

Grove Mill Sauvignon Blanc, 2006 (£8.49)
The grape that built New Zealand… and although they are trying to widen their repertoire with sauvignon gris and riesling, they are still very serious about sauvignon, having doubled the area planted since 2003. Gorgeous crisp nose and palate, almost English Cox crispness, some lovely gooseberry and kiwi notes. Instant appeal although slightly short- but one I’ll definitely be opening again. And impeccable green credentials, as a sticker on the back tells you that Grove Mill, from New Zealand’s Marlborough region, has not only achieved carbon neutrality in the production of wines, but in their delivery. In 2005, it managed to offset more than 300 tonnes of carbon dioxide through the plating of trees and use of renewable energy products. Grove Mill bottles are made from lighter glass, packaging is kept to a minimum and they plant longer rows of vines, thus reducing the fuel expended by tractors.

Backsberg Estate, Reserve Sauvignon Blanc 2007, Stellenbosch, South Africa (approx £8)
There’s no doubting this winery’s commitment – they have hired a full time environmentalist to look at green projects. On top of that, 10 percent of the farm has already been set aside for non-cultivation – to allow indigenous species of shrub to be preserved, and owner Michael Back is planning to reserve another 10 percent for growing eucalyptus trees as renewable forms of energy. When you get to the bottle, the flavours are fairly overblown, which I find is quite frequently with South African wines, but in this case comes from the well developed varietal flavours and aromas of sauvignon, coaxed out by cold temperature fermentation and French oak barrels used on just 15 percent of the wine. The excellent grip of acidity keeps things well within the designated area, and I love the little kick of pear and lime that you are left with.

Adobe Carmenere, Vinedoas Organicos Emiliana,  2005 (£7.95)
An organic vineyard that is making great strides to keep harmful chemicals out of the soils. Chile has a near ideal climate for organic wines, and they capitalise on it here with a range of fantastic wines, including the far better known Coyam. This one has a lovely rich nose, still young but in three or four years it should be deliciously inviting. Carmenere is a close cousin of the merlot grape (in fact, much of Chile thought it was happily growing merlot until recently, when studies revealed it was in fact carmenere). This has a fresh taste despite being an almighty 14.5 degrees, with layers of chocolate and raspberries, and evident tannins – but although a bit of bottle ageing would be helpful, even now they are ripe and silky.

Terroirs des Châteaux Forts, Domaine Rolly-Gassmann, Alsace 2004 (£8.25)
Most consumers today are largely unaware of carbon neutral vineyards – and it has to be said there are still only a handful worldwide – but biodynamism has been in the general conscience for a number of years. Most simply, it is a style of viticulture that is about working in harmony with nature, rather than trying to control it, and this Alsace estate is a leading proponent. The wine is a mix of gewürztraminer, auxerrois, riesling and pinot gris, which gives it rich, yellowy hue and a slightly disconcerting palate at first. But the flavours quickly meld into complexity rather than confusion – it flirts with sweetness but has a charmingly sour finish, with notes of grapefruit, pear and mandarin.

Parducci, Pinot Noir, Mendocino County (approx £8)
This is a fruity, deceptively simple wine, but then the best pinot noir have an almost zen-like purity, and for the money it’s fantastic value. Elegant and fresh but with more emphasis on plums and brambly fruits than a Burgundy pinot, and a dash of American oak in the ageing that gives it some sweetness that makes it a good match for an array of foods (I loved this wine with crispy duck and pancakes). And – drum roll – you’re buying from America’s first carbon neutral winery. Parducci has gone about it as officially as possible; working with the California Climate Action Registry to calculate emissions of greenhouse gases, and then mitigate and offset emissions. In recent years they have installed solar energy, used biodiesel in company vehicles and farm equipment, converted from incandescent to fluorescent lighting in the winery and begun a local tree planting program. Oh, and managed to make some pretty decent wine along the way.